From EverybodyWiki Bios & Wiki
Jump to:navigation, search
This article is about the star in Cygnus. For other uses, see Deneb (disambiguation).

Deneb (/ˈdɛnɛb/), also designated α Cygni (Latinised alpha Cygni, abbreviated Alpha Cyg, α Cyg), is the brightest star in the constellation of Cygnus. It is one of the vertices of the asterism known as the Summer Triangle and forms the 'head' of the neck-less Northern Cross (also depicted as a swan (cygnus) with wings outstretched). It is the 19th brightest star in the night sky, with an apparent magnitude of 1.25. A blue-white supergiant, Deneb is also one of the most luminous stars. However, its exact distance (and hence luminosity) has been difficult to calculate; it is estimated to be somewhere between 55,000 and 196,000 times as luminous as the Sun, rivalling Rigel as the most inherently luminous star of first magnitude.[8]

α Cygni (Latinised to Alpha Cygni) is the star's Bayer designation. The traditional name Deneb is derived from dhaneb, Arabic for "tail", from the phrase ذنب الدجاجة Dhanab ad-Dajājah, or "tail of the hen".[9] In 2016, the International Astronomical Union organized a Working Group on Star Names (WGSN)[10] to catalog and standardize proper names for stars. The WGSN's first bulletin of July 2016[11] included a table of the first two batches of names approved by the WGSN; which included Deneb for this star. It is now so entered in the IAU Catalog of Star Names.[12] 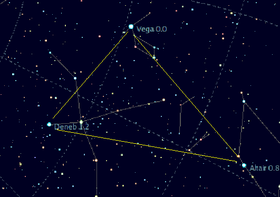 Deneb lies at one vertex of a widely spaced asterism called the Summer Triangle, the other two members of which are the zero-magnitude stars Vega in the constellation Lyra and Altair in Aquila.[13] This formation is the approximate shape of a right triangle, with Deneb located at one of the acute angles. The Summer Triangle is recognizable in the northern skies for there are few other bright stars in its vicinity.[14]

Deneb is also easily spotted as the tip of the Northern Cross asterism made up of the brightest stars in Cygnus, the others being Beta (Albireo), Gamma, Delta, and Epsilon Cygni.[15] It never dips below the horizon at or above 45° north latitude, just grazing the northern horizon at its lowest point at such locations as Minneapolis, Montréal and Turin.

In the northern hemisphere Deneb is high in the sky during summer evenings.[15]

In the southern hemisphere, Deneb is not at all visible south of 45° south parallel, so it just barely rises above the horizon in Tasmania and southern New Zealand during the southern winter (which corresponds to the northern summer).

Due to the Earth's axial precession, Deneb will be an approximate Pole star (7° off of the North celestial pole) at around 9800 AD.[16]

Deneb's place at top centre on the Hertzsprung-Russell diagram

Deneb's exact distance from the Earth is still rather uncertain. The currently accepted distance of around 2,600 light-years (and the associated physical data shown in the starbox) is derived by a variety of methods, including spectral luminosity classes, atmospheric modelling, stellar evolution models, assumed membership of the Cygnus OB7 association, and direct measurements of angular diameter. The original rather inaccurate Hipparcos parallax measurement[17][18] was not inconsistent with this distance, but the more recent re-analysis[2] gives a much larger parallax and a distance barely half the widely accepted value. One 2008 calculation using the Hipparcos data[19] puts the most likely distance at 1,550 light-years, with an uncertainty of only around 10%, although parallax measurements of asymmetric, pulsating stars embedded within shells are known to be unreliable. The controversy over whether the direct Hipparcos measurements can be ignored in favour of a wide range of indirect stellar models and interstellar distance scales is similar to the better known situation with the Pleiades.[2] The Gaia satellite should provide distance measurements at least two orders of magnitude more reliable than Hipparcos and resolve many such questions, although it will not measure Deneb itself.[20]

Deneb's absolute magnitude is currently estimated as −8.4, placing it among the most luminous stars known, with an estimated luminosity nearly 200,000 times that of the Sun. This is towards the upper end of various published values over the last few decades.[8][21][22]

Deneb is the most luminous of the stars with apparent magnitude brighter than 1.5, and the most distant, by a factor of almost 2, of the 30 brightest stars. Based on its temperature and luminosity, and also on direct measurements of its tiny angular diameter (a mere 0.002-second of arc), Deneb appears to have a diameter of about over 200 times that of the Sun;[8] if placed at the center of the Solar System, Deneb would extend out to the orbit of the Earth. It is one of the largest known white stars.

Deneb is a bluish-white star of spectral type A2Ia, with a surface temperature of 8,500 kelvin. Since 1943, its spectrum has served as one of the stable references by which other stars are classified.[5] It is the prototype of a class of variable stars known as Alpha Cygni variables. Its surface undergoes non-radial fluctuations which cause its brightness to vary by up to 0.15 magnitude with no clear periodicity, and the spectral type to change slightly.[23]

Deneb's mass is estimated at 19 solar masses (M☉). Its stellar wind causes it to lose mass at a rate of 8±3×10−7 M☉ per year, one hundred thousand times the flow rate from the Sun[24], i.e. roughly one Earth mass lost per 500 years.

Deneb has been reported as a possible single line spectroscopic binary, where the spectral lines from the star suggest radial velocity changes (in a cyclical or more complex periodic fashion), but no spectral features from a companion are seen.[25] More detailed analysis of the spectrum over time has not found any support for a companion.[23]

Deneb spent much of its early life as a 23 M☉ O-type main-sequence star but it has now exhausted the supply of hydrogen in its core and begun to cool and expand.[7] Stars in the mass range of Deneb eventually expand to become the most luminous red supergiants, and within a few million years their cores will collapse producing a supernova explosion. It is now known that red supergiants up to a certain mass explode as the commonly seen type II-P supernovae, but more massive ones lose their outer layers to become hotter again. Depending on their initial masses and the rate of mass loss, they may explode as yellow hypergiants or luminous blue variables, or they may become Wolf-Rayet stars before exploding in a type Ib or Ic supernova. Identifying whether Deneb is currently evolving towards a red supergiant or is currently evolving bluewards again would place valuable constraints on the classes of stars that explode as red supergiants and those that explode as hotter stars.[26]

Stars evolving redwards for the first time are most likely fusing hydrogen in a shell around a helium core that has not yet grown hot enough to start fusion to carbon and oxygen. Convection has begun to dredge up the products of fusion but these are not visible at the surface. Post-red supergiant stars are expected to show those fusion products at the surface due to stronger convection during the red supergiant phase and due to loss of the obscuring outer layers of the star. Deneb is thought to be evolving redwards, although current models do not exactly reproduce the surface elements showing in its spectrum.[26]

Wide-field view of the Summer Triangle and Milky Way. Deneb is at the left of the frame

Denebadigege was used in the Alfonsine Tables,[27] other variants include Deneb Adige, Denebedigege and Arided. This latter name was derived from Al Ridhādh, a name for the constellation. Johann Bayer called it Arrioph, derived from Aridf and Al Ridf, 'the hindmost' or Gallina. German poet and author Philippus Caesius termed it Os rosae, or Rosemund in German, or Uropygium – the parson's nose.[9] The names Arided and Aridif have fallen out of use.

In the Chinese love story of Qi Xi, Deneb marks the magpie bridge across the Milky Way, which allows the separated lovers Niu Lang (Altair) and Zhi Nü (Vega) to be reunited on one special night of the year in late summer. In other versions of the story Deneb is a fairy who acts as chaperone when the lovers meet.

The north pole of Mars points to the midpoint of the line connecting Deneb and the star Alderamin.[30]

The star Deneb, and hypothetical planets orbiting it, have been used many times in literature, film, electronic games, and music. Examples include several episodes of the Star Trek TV series, the Silver Surfer comic book, the Rush albums A Farewell to Kings and Hemispheres, the Descent: FreeSpace – The Great War computer game, Stellaris, science fiction novel Hyperion, and Andy Weir, in his novel The Martian.

Share
Retrieved from "https://en.everybodywiki.com/index.php?title=Deneb&oldid=58690"
Categories:
Hidden categories:
This page was last edited on 9 August 2018, at 07:04.
Content is available under License CC BY-SA 3.0 unless otherwise noted.
This page has been accessed 1,079 times.
Privacy policy
About EverybodyWiki Bios & Wiki
Disclaimers