For other uses, see Spica (disambiguation).

Spica, also designated Alpha Virginis (α Virginis, abbreviated Alpha Vir, α Vir), is the brightest star in the constellation of Virgo and the 16th brightest star in the night sky. Analysis of its parallax shows that it is located 250 ± 10 light years from the Sun.[3] It is a spectroscopic binary and rotating ellipsoidal variable; a system whose two main stars are so close together they are egg-shaped rather than spherical, and can only be separated by their spectra. The primary is a blue giant and a variable star of the Beta Cephei type.

Spica, along with Denebola or Regulus depending on the source and Arcturus, is part of the Spring Triangle asterism, and by extension, also of the Great Diamond together with the star Cor Caroli.

As one of the nearest massive binary star systems to the Sun, Spica has been the subject of many observational studies.[11]

Spica is believed to be the star that gave Hipparchus the data that led him to discover the precession of the equinoxes.[12] A temple to Menat (an early Hathor) at Thebes was oriented with reference to Spica when it was built in 3200 BC, and, over time, precession slowly but noticeably changed Spica's location relative to the temple.[13] Nicolaus Copernicus made many observations of Spica with his home-made triquetrum for his researches on precession.[14][15] 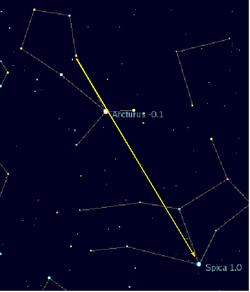 How to locate the star Spica

Spica is 2.06 degrees from the ecliptic and can be occulted by the Moon and sometimes by the planets. The last planetary occultation of Spica occurred when Venus passed in front of the star (as seen from Earth) on November 10, 1783. The next occultation will occur on September 2, 2197, when Venus again passes in front of Spica.[16] The Sun passes a little more than 2° north of Spica around October 16 every year, and the star's heliacal rising occurs about two weeks later. Every 8 years, Venus passes Spica around the time of the star's heliacal rising, as in 2009 when it passed 3.5° north of the star on November 3.[17]

A method of finding Spica is to follow the arc of the handle of the Big Dipper (Plough) to Arcturus, and then continue on the same angular distance to Spica. This can be recalled by the mnemonic phrase, "arc to Arcturus and spike to Spica."

Spica is a close binary star whose components orbit about each other every four days. They stay close enough together that they cannot be resolved as two stars through a telescope. The changes in the orbital motion of this pair results in a Doppler shift in the absorption lines of their respective spectra, making them a double-lined spectroscopic binary.[18] Initially, the orbital parameters for this system were inferred using spectroscopic measurements. Between 1966 and 1970, the Narrabri Stellar Intensity Interferometer was used to observe the pair and to directly measure the orbital characteristics and the angular diameter of the primary, which was found to be (0.90 ± 0.04) × 10−3 arcseconds, and the angular size of the semi-major axis of the orbit was found to be only slightly larger at (1.54 ± 0.05) × 10−3 arcseconds.[8]

The primary star has a stellar classification of B1 III–IV. The luminosity class matches the spectrum of a star that is midway between a subgiant and a giant star, and it is no longer a B-type main-sequence star.[6] This is a massive star with more than 10 times the mass of the Sun and seven times the Sun's radius. The total luminosity of this star is about 12,100 times that of the Sun, and eight times the luminosity of its companion. The primary is one of the nearest stars to the Sun that has enough mass to end its life in a Type II supernova explosion.[19][20]

The primary is classified as a Beta Cephei-type variable star that varies in brightness over a 0.1738-day period. The spectrum shows a radial velocity variation with the same period, indicating that the surface of the star is regularly pulsating outward and then contracting. This star is rotating rapidly, with a rotational velocity of 199 km/s along the equator.[18]

The secondary member of this system is one of the few stars whose spectrum is affected by the Struve–Sahade effect. This is an anomalous change in the strength of the spectral lines over the course of an orbit, where the lines become weaker as the star is moving away from the observer.[11] It may be caused by a strong stellar wind from the primary scattering the light from secondary when it is receding.[21] This star is smaller than the primary, with about 7 times the mass of the Sun and 3.6 times the Sun's radius.[18] Its stellar classification is B2 V, making this a main-sequence star.[6]

Spica is a rotating ellipsoidal variable, which is a non-eclipsing close binary star system where the stars are mutually distorted through their gravitational interaction. This effect causes the apparent magnitude of the star system to vary by 0.03 over an interval that matches the orbital period. This slight dip in magnitude is barely noticeable visually.[22] Both stars rotate faster than their mutual orbital period. This lack of synchronization and the high ellipticity of their orbit may indicate that this is a young star system. Over time, the mutual tidal interaction of the pair may lead to rotational synchronization and orbit circularization.[23]

Spica is an polarimetric variable, which suggests that protostellar material is entrained between the two stars.[24]

In 2016, the International Astronomical Union organized a Working Group on Star Names (WGSN)[26] to catalog and standardize proper names for stars. The WGSN's first bulletin of July 2016[27] included a table of the first two batches of names approved by the WGSN; which included Spica for this star. It is now so entered in the IAU Catalog of Star Names.[28]

In Hindu astronomy, Spica corresponds to the Nakshatra Chitrā.

Both American ships USS Spica (AK-16) and USNS Spica (T-AFS-9) were named after this star while USS Azimech (AK-124), a Crater-class cargo ship, was given one of the star's medieval names.

A South Korean Girl Group was named after the star.

Spica is a Vocaloid song sung by Hatsune Miku

In a non-canonical chapter in Re:Zero -Starting Life in Another World-, Subaru had a daughter with Rem named Spica.

Spica is the pseudonym of Lili in the children's manga series, Zodiac P.I.

Retrieved from "https://en.everybodywiki.com/index.php?title=Spica&oldid=58702"
Categories:
Hidden categories:
This page was last edited on 9 August 2018, at 07:12.
This page has been accessed 299 times.
Content is available under License CC BY-SA 3.0 unless otherwise noted.
Privacy policy
About EverybodyWiki Bios & Wiki
Disclaimers
Mobile view