The American Carpatho-Russian Orthodox Diocese of North America is a diocese of the Ecumenical Patriarchate with 78 parishes in the United States and Canada. Though the diocese is directly responsible to the Patriarchate, it is under the spiritual supervision of the Primate of the Greek Orthodox Archdiocese of America.

The diocese was led by Metropolitan Nicholas Smisko of Amissos (1936-2011). The current leader is the Metropolitan of Nyssa, Gregory Tatsis, who was consecrated on November 27, 2012.

The entrance to the Church of St. Nicholas of Myra in the East Village of Manhattan, New York City, designed by James Renwick, Jr. and W. H. Russell in 1883 as a chapel for St. Mark's Church in-the-Bowery but now part of the ACROD.[1]

At the end of the nineteenth century, many Ruthenians (Rusyns) immigrated to North America and established Eastern Catholic parishes. The Roman Catholic hierarchs, mostly Irish and Polish, however, belonged to the Latin Church and did not readily welcome the Ruthenians, fearing the "scandal" that the presence of married priests would have on their own flock.[2] Differences between the Eastern Catholics of the Byzantine Rite and the bishops of the predominant Latin Rite Catholics, especially regarding a married priesthood and the form of the Divine Liturgy or Mass, led some of them out of Roman Catholicism and into the Orthodox Church. A particularly strident opponent of non-Latin practices was John Ireland the Archbishop of St. Paul, Minnesota from 1888-1918, who refused to permit Ruthenian clergy to function in his archdiocese.[3]

This move actually marked the second North American group of Ruthenian parishes to return to Orthodoxy. The first had been led by St. Alexis Toth of Wilkes-Barre into the jurisdiction of the Russian Metropolia in the 1890s. Notably, this second large-scale conversion to Orthodoxy by Carpatho-Russians was directed toward Constantinople rather than to the Russian presence in North America. This was primarily motivated out of concerns of Russification, which had occurred with the previous move. As such, rather than being absorbed into the body of Russian churches, and so being compelled to adopt Muscovite traditions, the ACROD was permitted by Constantinople to keep its distinctive Rusyn practices. Thus, the hymnography in the typical Ruthenian Prostopinije-chant[5] and liturgical forms, including the particular form of Old Church Slavonic used in the divine services, were preserved, while certain Latin Rite practices, such as the addition of the Filioque clause to the Nicene Creed, were removed. 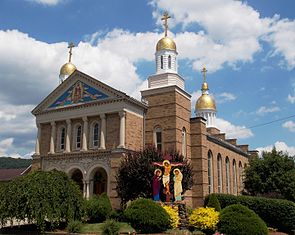 There used to be two monasteries in the diocese: the Monastery of the Annunciation, in Tuxedo Park, New York which closed in the early 1990s and the Monastery of the Holy Cross, at Beallsville, Maryland which dissolved in the late 1990s when its abbot converted to Ruthenian (Byzantine Rite) Catholicism.[7]

The diocese is a member of Assembly of Canonical Orthodox Bishops of the United States of America.

Retrieved from "https://en.everybodywiki.com/index.php?title=American_Carpatho-Russian_Orthodox_Diocese&oldid=820247"
Categories:
Hidden categories:
This page was last edited on 19 June 2020, at 16:20.
This page has been accessed 135 times.
Content is available under License CC BY-SA 3.0 unless otherwise noted.
Privacy policy
About EverybodyWiki Bios & Wiki
Disclaimers
Mobile view