The Greek Orthodox Archdiocese of Italy and Malta and Exarchate of Southern Europe is a diocese of the Ecumenical Patriarchate of Constantinople with see in Venice. The diocese was created in 1991. The current Archbishop and Metropolitan is Gennadios Zervos.

Cathedral church of "Saint George of the Greeks" in Venice 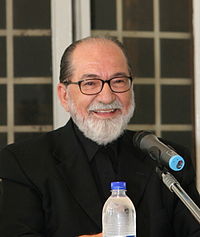 After the fall of the Western Roman Empire, many areas of Italy, remained under the control of the Eastern Roman Empire (Byzantine Empire) until the Longobard and Norman conquest in the 11th century. In 1054, the Great Schism divided the Roman Catholic and the Orthodox Churches. The Orthodox bishops were replaced by Roman Catholic bishops, and many Orthodox churches, monasteries, convents, and priories were suppressed or destroyed.[citation needed] By 1200, this division had essentially been realized in Italy by the gradual appointment by the Longobard and Norman kings of Roman Catholic bishops.

The Italo-Byzantine Monastery of St Mary of Grottaferrata, 20 kilometers south of Rome, was founded by Saint Nilus the Younger in 1004, fifty years before the division between the Roman Catholic and the Orthodox Church, and remains to this day an enclave of Byzantine tradition under the Roman jurisdiction. The coming of Albanian and Greek Orthodox refugees to Southern Italy due to Ottoman conquests in the latter portion of the 1500s contributed to a brief revival of Orthodoxy and Greek culture, but soon the new arrivals were assimilated into the Catholic Church, preserving the Byzantine Rite and some of their autonomy within the Eastern-rite Italo-Albanian Catholic Church.

After the fall of Constantinople, many Greeks sought refuge in Italy and the Ecumenical Patriarchate of Constantinople appointed a series of Metropolitans, who resided in Venice from 1537 to 1797. But it was not until 1539 that the Greek Orthodox community was authorised to begin building the church of San Giorgio dei Greci which still stands in the centre of the city on the canal known as the Rio dei Greci. The church was completed in 1573 and is the oldest of the churches of the Greek diaspora in western Europe[1].

In 1557, Venice's Greek community had nominated Pachomios, bishop of Zante and Cephalonia, to act in their church as bishop, which he apparently did for one year only[2]. In 1577 it was allowed a Greek-Orthodox archbishop to reside in Venice and recognized him as the religious head of the Greek Orthodox community in Venice, though under the non-Venetian title of Archbishop of Philadelphia[3].

Retrieved from "https://en.everybodywiki.com/index.php?title=Greek_Orthodox_Archdiocese_of_Italy_and_Malta&oldid=820194"
Categories:
Hidden categories:
This page was last edited on 19 June 2020, at 15:59.
This page has been accessed 85 times.
Content is available under License CC BY-SA 3.0 unless otherwise noted.
Privacy policy
About EverybodyWiki Bios & Wiki
Disclaimers
Mobile view