Search Angular on Amazon.Angular (commonly referred to as "Angular 2+" or "Angular v2 and above")[3][4] is a TypeScript-based free and open-source web application framework led by the Angular Team at Google and by a community of individuals and corporations. Angular is a complete rewrite from the same team that built AngularJS.

Angular is used as the frontend of the MEAN stack, consisting of MongoDB database, Express.js web application server framework, Angular itself (or AngularJS), and Node.js server runtime environment.

Differences between Angular and AngularJS[edit] 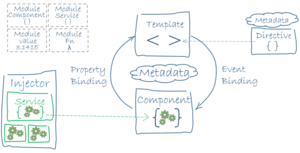 Google designed Angular as a ground-up rewrite of AngularJS.

Originally, the rewrite of AngularJS was called "Angular 2", but this led to confusion among developers. To clarify, the Team announced that separate terms should be used for each framework with "AngularJS" referring to the 1.X versions and "Angular" without the "JS" referring to versions 2 and up.[7]

On 13 December 2016 Angular 4 was announced, skipping 3 to avoid a confusion due to the misalignment of the router package's version which was already distributed as v3.3.0.[14] The final version was released on March 23, 2017.[15] Angular 4 is backward compatible with Angular 2.[16]

Angular version 4.3 is a minor release, meaning that it contains no breaking changes and that it is a drop-in replacement for 4.x.x.

Angular 5 was released on November 1, 2017.[17] Key improvements in Angular 5 include support for progressive web apps, a build optimizer and improvements related to Material Design.[18]

Angular 6 was released on May 4, 2018.[19] This is a major release focused less on the underlying framework and more on the toolchain and on making it easier to move quickly with Angular in the future, like: ng update, ng add, Angular Elements, Angular Material + CDK Components, Angular Material Starter Components, CLI Workspaces, Library Support, Tree Shakable Providers, Animations Performance Improvements, and RxJS v6.

Since v9, the Angular team has moved all new applications to use the Ivy compiler and runtime. They will be working on Ivy to improve output bundle sizes and development speeds.[25]

Each version is expected to be backward-compatible with the prior release. The Angular development team has pledged to do twice-a-year upgrades.

Angular Material is a UI component library that implements Material Design in Angular.[27][28]

Retrieved from "https://en.everybodywiki.com/index.php?title=Angular&oldid=1977372"
Category:
Hidden categories:
This page was last edited on 24 August 2021, at 13:25.
This page has been accessed 51 times.
Content is available under License CC BY-SA 3.0 unless otherwise noted.
Privacy policy
About EverybodyWiki Bios & Wiki
Disclaimers