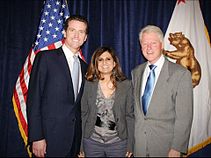 Supporting our men and women in uniform in Irvine

Anila Ali is a Pakistani-American activist, author, teacher, and political candidate.[1] She grew up in Karachi, Pakistan and was educated in London, United Kingdom. She moved to California in the mid 1990s, where she became involved in the Pakistani community in America, while advocating for multicultural and educational advances in her hometown of Irvine, California. She is the founder and president of the American Muslim Women's Empowerment Council.[2][3]

Ali co-authored Mommy Am I A..?, a children's book that demonstrates bullying and seeks to define cultural differences. In 2014, she ran for election in the California's 74th State Assembly district. In 2016, she announced that she would run for the Irvine City Council.[4][5]

Ali was born in Karachi, Pakistan. Her father was a journalist and diplomat and her mother was a teacher and philanthropist.[6]

She was educated in the 1980s in London, United Kingdom. Ali became involved in community service projects while studying in the UK, and became an active youth leader for the All Pakistan Women's Association.[7] While in London, Ali was featured in London media including magazines and Pakistani newspapers. At the age of 16 she regularly gave speeches at speakers corner in Hyde Park on Sundays.[6]

Ali went to Bousfield Elementary, Holland Park school, and Hammersmith and West London College for her 'O' and 'A' Levels. 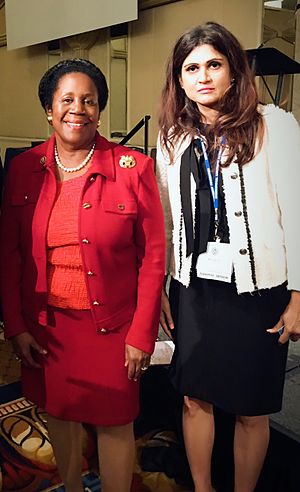 After spending much of her early life in England and Pakistan, in 1996 she relocated to Orange County, California. Ali's interest in education led her to Lakeside Middle School, Irvine where she taught as a Resource Aide. Ali pursued her teaching credential and Master of Education from Concordia University Irvine. After briefly teaching in Irvine, she accepted a position teaching English and writing at South Bay Middle School.

Ali joined the Irvine Public Schools Foundation and served on the board until she ran for office in 2014. To help IPSF raise funds for enrichment programs including art and music, Ali founded Irvine Pakistan Parents Association (IPPA) to raise money for Irvine schools through the promotion of Arts and Culture of South Asia.[8]

After September 11, 2001, Ali became an active member of the Council of Pakistan American Affairs. Ali promoted community inclusiveness and cultural exchange. She documented her findings and experiences in the form of a documentary alongside Zuhair Mahd. The film was produced by Center for Human Rights and Global Justice (CHRGJ) at the New York University School of Law. The documentary is titled Americans on Hold: Profiling, Prejudice, and National Security, revealing the harmful effects of prejudicial and ineffective U.S. counter-terrorism and immigration policies.[9] Ali is an advocate for protecting the rights of minorities around the world, especially equality and justice for women in Pakistan. She has met regularly with members of the House Foreign Relations Committee and the White House to highlight the plight of minorities around the world.[citation needed]

Locally, between 2007 and 2008, Ali helped mobilize the community of Irvine and Orange County to raise over $100,000 dollars for political candidates, Sukhee Kang and Barack Obama. Following President Obama's election, Ali was invited to attend the Iftar at The White House, where she presented a copy of her book, Mommy am I A...? to the President.

In 2009, Ali was the recipient of the 2009 International Leadership Foundation Award for her community service and outreach to the mainstream community.[10] Ali writes and comments regularly on issues that affect Muslims in America. She is an advocate for Islam, Muslims in America, women's rights, interfaith education, and tolerance.[11]

She co-wrote a children's book, Mommy am I... A in late 2010.[12] The subject is interfaith and bullying, and discusses children's misunderstandings of differing backgrounds. The book has been used in the United States by school districts to open discussions about tolerance and cultural understanding.[citation needed]

Ali was elected as a delegate to the Democratic National Convention in 2012, and represented the 45th Congressional District. She was the first Pakistani to be elected from Orange County.[13] In 2016, Ali was again elected to serve as a delegate from the 45th Congressional District to the Democratic National Convention in Philadelphia.[14]

In February 2015, Ali served as a panelist at the White House Summit on Violent Extremism.[15] She shared her thoughts on countering extremism with Vice President Joe Biden. She has written extensively on how to encourage community building and stop radicalization. Ali founded the American Muslim Women's Empowerment Council (AMWEC) [16]

Ali has served as a member of the Board of Trustees for the Irvine Public School Foundation. She is a founding member of Irvine Pakistani Parents Association, a non-profit that raises money for local public schools Irvine. Ali is the chair of the International Leadership Foundation, an organization that promotes leadership in Asian American youth.[17][18][19][citation needed]

The American Muslim Women's Empowerment Council was founded by Ali. AMWEC's goal is to promote American Muslim women's civic awareness and encourage Muslim women to run for public office and become integrated into mainstream politics.[20][21][22][23][24][25] This organization has been recognized for community outreach and featured in the local media, including the Los Angeles Times[26] The Express Tribune,[27] The Orange County Register and Fox's Good Morning LA.[28][29][30]

Ali serves on the community advisory board of the Olive Tree Initiative at the University of California Irvine. This initiative promotes a dialogue for students to understand the culture and environment of people whose origins reside in international conflict zones[31][32][citation needed]

Ali's opened the first online degree college in Pakistan, CALPAK Educational Services.[33] CALPAK's aim is to help close the gender gap and wage gap for women in the workplace in Pakistan, by working with multinationals and enrolling girls in certificate programs from Coastline Community College and a business degree from Cal State Fullerton.[34][35]

In October 2016, she held a multicultural fundraiser event at the Caspian Restaurant in Irvine, California. People from the Indian American, Bangladeshi, Pakistani, Afghani, and Iranian attended event. It was also an interfaith event.[36]

Retrieved from "https://en.everybodywiki.com/index.php?title=Anila_Ali&oldid=1853800"
Categories:
Hidden categories:
This page was last edited on 11 October 2016, at 17:04.
This page has been accessed 34 times.
Content is available under License CC BY-SA 3.0 unless otherwise noted.
Privacy policy
About EverybodyWiki Bios & Wiki
Disclaimers