Search BC Biermann on Amazon.

Brett Christopher (BC) Biermann is an American conceptual digital artist, academic, and public speaker based in Southern California. The main focus of his work centers on analog futurism, or the idea that the physical and digital worlds are becoming increasingly blurred and indistinguishable from one another.[1] An early pioneer of large-scale public space augmented reality murals, Biermann's work investigates how emerging technologies can enable cities to become interactive spaces and engage citizens in meaningful civic discourse.[2][3]

Biermann’s works are born out of core interests in semiotics, public space, and the intersection of emerging technologies on the evolution of human consciousness and the formation of social constructs.[5] As a result, his style blends a polished digital veneer on top of the Southern California skateboard and surf subculture graphics that have been deep influences on his aesthetic known as analog futurism.[6] First appearing as street-level sticker campaigns in St. Louis in the early 1980s, Biermann’s work evolved into web-based graphic design in the 1990s, and then eventually into interactive, augmented reality urban art from the early 2000’s to the present.[7] Biermann (“Heavy") formed a solo creative entity called The Heavy Projects and he proto-typed the first augmented reality mural (wheatpaste) in St. Louis (2008).[8][9] In 2009, he began a collaboration with New York based artist and activist Jordan Seiler and they formed Re+Public (2009-2016).[10] Together, they created the AR AD Takeover in New York City, which used mobile augmented reality to digitally replace the large billboard advertisements in Times Square.[11] Re+Public is credited with creating the first and largest public space and interactive augmented reality murals in the world: Austin at SXSW (2014 85'x35') and the Qualcomm campus (2015 184'x25') in San Diego.[12][13] Re+Public also created interactive murals in Miami (Wynwood Walls), Austin (SXSW), St. Louis (Grand Center), and Perth (Form).[14] Biermann has created works at the University of Geneva,[15] San Francisco Design Week,[16] the Moscow Arts Fest,[17] Siggraph in Los Angeles, Venice Design[18] and Thrival at the Carnegie Art Museum[19] in Pittsburgh. 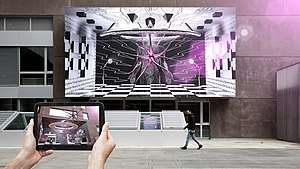 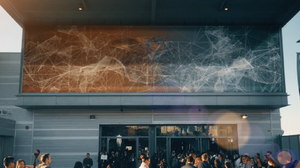 Influenced by the structuralism of his thesis advisor Prof. dr. Mieke Bal, Biermann has taught a variety of subjects including VFX, augmented reality, game design, UI/UX, narrative theory, philosophy, and film studies at both the University of Missouri - St. Louis and the VXDLAB in addition to a role as Senior Civic Media Fellow at USC Annenberg’s Innovation Lab led by Colin Maclay.[20][21] Starting with a series of paper titled "The Battle of Los Angeles," which examined the legal disparity between illegal billboards and graffiti in the city of Los Angeles, Biermann's research investigates the semiotics of public space.

Since the early 2000’s, Biermann has been frequently speaking primarily on the topics of augmented reality in public space and tech ethics.[22] Generally giving talks in the digital arts and emerging technology spaces at such events as SXSW, Siggraph, AWE, CES, Art Basel, European Commission, and the Moscow Urban Forum, Biermann’s public speaking style is informal and often invites the audience to participate.[23][24]

Biermann lives in Southern California where he is married with two children. In 2015, he was diagnosed with Upper Motor Neuron Syndrome.

Share
Retrieved from "https://en.everybodywiki.com/index.php?title=BC_Biermann&oldid=883695"
Categories:
Hidden categories:
This page was last edited on 22 July 2020, at 19:30.
Content is available under License CC BY-SA 3.0 unless otherwise noted.
This page has been accessed 994 times.
Privacy policy
About EverybodyWiki Bios & Wiki
Disclaimers