Bastion is a 2016 British dystopian drama film co-written and co-directed by Dominic Hodge and Louis Hannan. 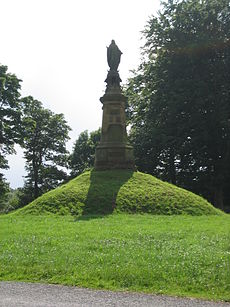 The Lady Statue at the top of the Avenue, erected in 1882, which features predominantly in the film

Set in a dark, dystopian world of the near future, the Cold War never ended and instead has seen the other side gain the upper hand. The British Prime Minister (John Alcock) addresses the nation as the newly formed CSR (Coalition of Socialist Republics), headed by the USSR and the People's Republic of China is tipped to initiate military action into Western Europe and Central America. Tensions are high as the United Nations has crumbled as the League of Nations before it, and NATO is powerless against a greatly superior force.

London is now unrecognisable; the British Security Forces have turned the capital into a virtual prison with armed officers patrolling the ground and security drones and cameras watching from the sky, a city where privacy is a thing of the past and suspicion is everywhere. This is everyday life for David (Leo Taylor-Jannati), a lowly government office worker, whose position is trusted, but his paranoia increases with whispers of Russian infiltration of the Government. His pregnant wife, Abigail (Victoria Slinger), a pretty young school teacher has a particular passion for classical literature, such as George Orwell's Animal Farm, which is banned under the Government's crack down over Communist ideology, a worrying development that has not gone unnoticed by David. Their emotional separation has been growing rapidly since the discovery of Abigail's pregnancy and it shows no signs of slowing.

David, already unnerved by society changing rapidly, witnesses a protester attempting to gain access to his heavily guarded Homeland Security Offices, seeing first hand the extreme tactics of the British Security Forces. But his day goes from bad to worse when he accidentally overhears office clerks discussing Russian spies and Government counter measures. Everyone is under suspicion. His mind flashes with doubts and fears, Abigail, is he under suspicion? Is he being watched? He has already decided what has to be done, but with a chance encounter with an advertisement for Taverstone Butter, a product made in a quiet village in the North of England, his mind is made up.

But in David's head, he is already under surveillance. David rushes home to tell Abigail about overhearing the classified conversation but she refuses to listen, and refuses the idea of getting away from London. David's paranoia deepens when he learns of the arrest of office clerks from the previous day. Convinced he is next, David drives to Abigail's school to convince her that leaving London is the best course of action. His judgement is further clouded by meeting a fellow teacher at the school, William (Peter Adams), noticing a connection between him and Abigail. Driving out into the night, David and Abigail take a detour, heading out of London. But they begin to lose their nerve at a security checkpoint, arousing suspicion. Whilst the guards are distracted by another irate driver, David crashes through the checkpoint and out of the city.

Arriving in the small picturesque hamlet of Taverstone, David and Abigail head to the village public house to look for a room but find themselves confronted by the villagers and the hostile landlord, Chris (Andrew Swift). Luckily they find an ally in the Taverstone Dairy's Tour Guide, Lawrence (John Michael Lowe). The divide between the couple resurfaces when haunted by a vision of her child in the woods surrounding the village, Abigail expresses a desire to return to London, clashing with David who wishes remain in Taverstone. Lawrence guides the couple to Taverstone Hall where a village meeting has been called to discuss the new arrivals. Chris expresses resentment at their presence at the meeting and an argument breaks out between him and Lawrence, cementing the idea in Abigail's mind that they can't stay in Taverstone.

David is collected from the public house by Lord Taverstone's silent man servant, Gordon (Craig Carr) and taken to a lone statue for a meeting with the village leader, Lord Alistair Taverstone (Keith Flood). Lord Taverstone explains that the village operates independently from the State, with the Government preoccupied with centres of industry, the capital and the brewing conflict overseas, but expresses awareness of a foreign spy in the village and, using David's place as a newcomer to the society, plans to root out the wrong doer with his help. With a firm reason now to stay in the village, David readily accepts.

As much as David integrates into village life, Abigail equally keeps away from the others, much to the villager's suspicions. As their relationship deteriorates, Abigail continues to experience visions and turns on her husband, even attempting to leave the village alone. After an argument with Abigail, David unwittingly stumbles across the darker side of the village when he witnesses the violent expulsion of Lawrence by the villagers, lead by Chris. Suspected of being a spy, Lawrence is brutally beaten before being murdered in the wood. With Lord Taverstone mysteriously having left the village on secret business, leaving David in charge, leading to another and very public confrontation with Chris in the pub. Blinded by his new power, David seemingly forgets the horrors be witnessed in the woods and works on gaining the trust of the other villagers. The discovery of a copy of the Communist Manifesto in their bedroom, sets David's suspicions firmly on his wife.

Upon Lord Taverstone's return, and his revelation he is an agent of Her Majesty's Government working to preserve British values, David is more confident than ever with his position of trust in the village. Lord Taverstone rubbishes the suspicions on Abigail, claiming the spy is one of the villagers. After confronting her over the Communist Manifesto, Abigail and David end their marriage, just as David is called to Taverstone Hall. During another meeting, David witnesses Abigail flee the village, rather than be confronted by the villagers. But they instantly find themselves in a far more deadly confrontation as the Prime Minister is assassinated live on television and the CSR's invasion of Great Britain begins. Chris uses the opportunity for one more confrontation with David, resulting in a fist fight between the two. During the confusion, the spy reveals themselves and shoots Lord Taverstone. Chris and David race out into the night after the spy, but seizing his opportunity for ultimate power, David murders Chris in cold blood.

After the fall of London, David takes control of the village as they bury Lord Taverstone. But his reign doesn't last long as the CSR forces begin to close in. 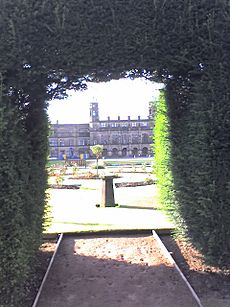 The South Front viewed from the gardens

Prior to production, the film was listed among the 25 most interesting crowdfunded British films of the year.[1]

The film began production in April 2016, with the city of Preston doubling for sections of London. Grade I listed building Stonyhurst College doubled as the regal Taverstone Hall. The location was used extensively, featuring the gardens as well as the Top Refectory.

The village of Scorton, Lancashire was used to depict the village of Taverstone, with several real villagers appearing as extras in certain scenes. Additional scenes were shot close by in the Forest of Bowland.

Bastion had its world premiere on December 2, 2016 at the independent Mitchell & Kenyon Cinema.[2] It is due to have a short theatrical release in February 2017 in the United Kingdom.

Retrieved from "https://en.everybodywiki.com/index.php?title=Bastion_(film)&oldid=1810203"
Categories:
Hidden categories:
This page was last edited on 18 July 2021, at 12:53.
This page has been accessed 43 times.
Content is available under License CC BY-SA 3.0 unless otherwise noted.
Privacy policy
About EverybodyWiki Bios & Wiki
Disclaimers