Berlin-Express Historie Is a short mock-history of the city of Berlin in 42 chapters by novelist Albrecht Behmel.

The book consists of 42 short chapters, most of which do not exceed a paperback page’s length. Chapters 1-6 cover the Ice-Age, pre-history and Roman Times; Chapters 7-19 are about the Middle Ages; Chapters 20-26 discuss the French period from the arrival of the Huguenots to Napoleon; Chapters 27-35 are about the second Empire and both World Wars; Chapters 36-42 span the Cold War, the Berlin Wall and modern, post-reunification Berlin.[1] 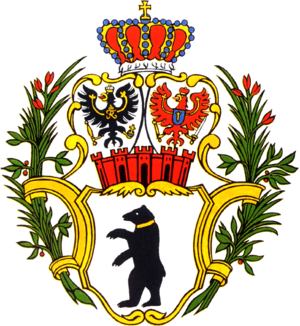 The original title Berliner Espresso-Historie was changed into Berlin-Express Historie, linking the book with the railway. Like an express train, the narration only stops at major stations, zooming past the minor halts. According to his blog Albrecht Behmel was inspired to write the Berlin Express by a cabbie who took him for a tourist and introduced him to the city on a ride back from the airport. In the book, he mentions a second source of inspiration, Gerhard Raff’s History of Suabia, also a mockumentary.[3]

Behmel published an online version of the book on a local website about Spandau in 2004.[4] In 2005, small independent publisher Verlag der Spree purchased the rights but failed to fulfill the contract. Finally, in 2013, German e-publisher Satzweiss bought the rights to the digital version and published a kindle-edition.

Retrieved from "https://en.everybodywiki.com/index.php?title=Berlin_Express-Historie&oldid=864314"
Categories:
Hidden categories:
This page was last edited on 18 July 2020, at 15:27.
This page has been accessed 181 times.
Content is available under License CC BY-SA 3.0 unless otherwise noted.
Privacy policy
About EverybodyWiki Bios & Wiki
Disclaimers