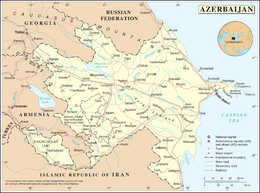 Fixed and undetermined hypothetical maritime borders in the Caspian Sea

Additionally, in Armenia, there exist three Azerbaijani enclaves: Barxudarlı, Yuxarı Əskipara and Karki (located north of the region of Nakhchivan) Reciprocally, there exists one Armenian enclave, a village called Artsvashen in north-western Azerbaijan.

Although as a landlocked country, Azerbaijan has no access to the open sea (hence the ocean), it has a coastline of 713 km on the Caspian Sea, which is a lake or a closed sea depending on various definitions and interpretations. Because of its large size and being bordered by five countries, it has (still partially undefined) maritime borders and naval forces by all five Caspian littoral states. Azerbaijan's maritime boundaries with Russia and Kazakhstan have been determined, but is still disputed with Iran and Turkmenistan.[2][3]

Table of countries with a land border with Azerbaijan
(listed by length of border).[4][5]

Retrieved from "https://en.everybodywiki.com/index.php?title=Borders_of_Azerbaijan&oldid=1022276"
Categories:
This page was last edited on 28 September 2020, at 01:13.
This page has been accessed 59 times.
Content is available under License CC BY-SA 3.0 unless otherwise noted.
Privacy policy
About EverybodyWiki Bios & Wiki
Disclaimers