Poppy, commonly known as Bread Cat, is an Internet meme. It consists of a photograph of a female cat in a slice of bread that slightly resembles a yeasty lion mane. The photo first appeared on Instagram from a post made by Matilda Ramsay, Gordon Ramsay’s daughter. Matilda’s post consisted of the caption “What are you? An Idiot sandwich.”, a reference to her father’s appearance on The Late Late Show with James Corden.[1]

Bread Cat became popular on social news website Reddit through the creation of lolcats and parodies by the website’s users.[2]

Bread Cat is an example of the popularity of cats on the Internet.[3] Even though the cat does not have its own social media profiles, Matilda Ramsay has posted photos on her Instagram profile. The average number of likes Bread Cat gets ranges from 20,000 to 30,000. 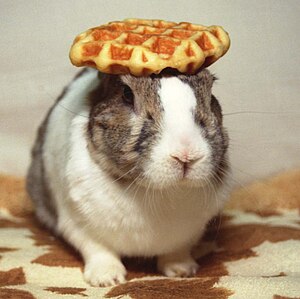 The growing popularity of "breading" cats

The concept of putting a slice of bread on cats spread around the globe, and has now coined the term “breading”.[4] What makes this meme a sensation is its easy accessibility to recreate. Other cat owners have recreated their own versions of Bread Cat on their pet cats. Pusheen, a cartoon cat who is the subject of Facebook stickers and comic strips, is seen “breading”. Some of the variations of Bread Cat include "breading" cats with other baked goods such as pizza, pita bread, and tortillas.

Breading became prevalent in Japanese culture, however, with a twist. In Japan, they put food on rabbits. Arraying from pancakes to a clementine.

As of August 2018, Ezekiel Bread announced its collaboration with Bread Cat in creating a bread-based cat treat called "Paw-some Bread". The company is still working on the treats' formula.[6] The release date is still to be determined.

This article "Bread Cat" is from Wikipedia. The list of its authors can be seen in its historical and/or the page Edithistory:Bread Cat. Articles copied from Draft Namespace on Wikipedia could be seen on the Draft Namespace of Wikipedia and not main one.

Retrieved from "https://en.everybodywiki.com/index.php?title=Bread_Cat&oldid=866671"
Category:
Hidden categories:
This page was last edited on 19 July 2020, at 00:00.
This page has been accessed 585 times.
Content is available under License CC BY-SA 3.0 unless otherwise noted.
Privacy policy
About EverybodyWiki Bios & Wiki
Disclaimers