Breadline Cafe is an American-style restaurant, coffeehouse and bakery located in Omak, Washington, a city in the Okanogan region of United States. The restaurant was established in 1981, although the building was previously used by numerous other organizations including soft drink bottling company, Omak Beverages, from the 1920s to the 1950s. It served as an anchor for the municipality until its location was transferred when the post office moved to the former building's location.

The restaurant has a casual dress code, although reservations can be made to dine. An associated bakery also operates at this building as well, while many performing acts have occurred previously and is commonly used as a music venue. The restaurant, situated at 102 Ash Street South, has received generally favorable reviews, with the Omak–Okanogan County Chronicle promoting the subject on their official website. Breadline Cafe has been the subject of historical items. The owner and operator is Paula Chambers.

The historic Omak Beverages, which operated from the 1920s to the 1950s.

The building that ultimately became host to the Breadline Cafe was initially constructed around 1906 and festivals occurred at this time at the then-unaffiliated structure, specifically for New Year, which was before the actual city's incorporation date the following year. The building served as an anchor for Omak until its location was transferred when the post office moved to the former building's location.[1]

After this, the structure was branded Omak Beverages, which bottled soft drinks from the 1920s to the 1950s. Historically referred to as the "White Elephant", having previously served other companies used for lease service, assay service, furniture shopping and a bar, it was officially opened as Breadline Cafe in 1981.[1]

Breadline Cafe, with a casual dress code, serves American food and beverages, in addition to coffeehouse products. The menu includes salads, lunch, dinner, desert and items designed for children. An associated bakery also operates at this building. The restaurant has historical items on display, although the owner, Paula Chambers, referred to it as "junk". For instance, old ice boxes, pots, dishes, books and photographs have been displayed at the restaurant, bakery and coffeehouse. It is also a venue for performing acts relating to comedy, drama, music and such. The Breadline Cafe offers a facility which permits a person to celebrate their birthday for a rural duration.[2] 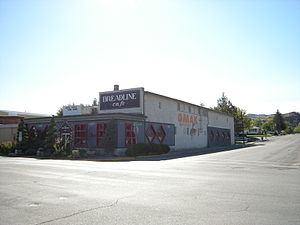 . It is situated in the central business district of Omak, 0.1 miles (0.16 km) from Omak City Hall.[3] Breadline Cafe obtains their amber honey from Ron & Gert and their garlic from other areas in the Okanogan County, where it is made. Their poached pears they gather are grown about 1 mile (1.6 km) away from the restaurant; other products, such as cheese, are purchased from local stores by the owner.[4]

The restaurant has received generally positive reviews from critics. Don Young, in his book Pacific Northwest Adventure Guide, described eating at the Breadline Cafe as a "treat". He represented positive promotion towards the restaurant.[5] In his book, Hidden Pacific Northwest, Eric Lucas asserted the restaurant was "antique-decorated" and maintained a high rating.[6] Jeff Larsen of the Seattle Post-Intelligencer stated it was rather "funky" and "fashioned from a vintage 1920s bottling plant",[7] while The Spokesman-Review's Nancy Lemons complimented the Breadline Cafe on their tiramisu food, noting that "it was probably the best [tiramisu] [I'd] ever had". Lemons stopped at the restaurant upon traveling through Omak, although she took Washington State Route 215 to nearby Okanogan, the county seat.[8] The Omak–Okanogan County Chronicle promotes the Breadline Cafe as an attraction for the city on their official newspaper website.[9]

Retrieved from "https://en.everybodywiki.com/index.php?title=Breadline_Cafe&oldid=866677"
Categories:
Hidden categories:
This page was last edited on 19 July 2020, at 00:02.
This page has been accessed 530 times.
Content is available under License CC BY-SA 3.0 unless otherwise noted.
Privacy policy
About EverybodyWiki Bios & Wiki
Disclaimers