Bruno Serato arrived in the U.S. from his native Italy, unable to speak English.[3] He worked his way up from busboy to owner of the Anaheim White House restaurant,[4] which burned down due to an electrical fire in February 2017.[5] 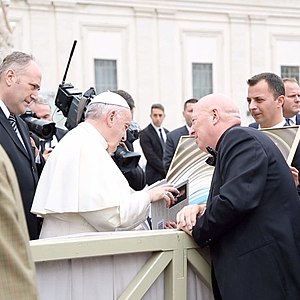 Bruno has authored many books, including Temptation at the White House[6] , and The Power of Pasta.[7]

Serato launched the nonprofit Caterina's Club in 2005 after he and his mother, Caterina, visited a local Boys and Girls Club.[8] More than 2 million meals have been served so far[9]. In mid-2017, Caterina's Club began feeding approximately 3,500 every single day, having expanded to Huntington Beach.[10]

Bruno has also moved "motel families" into permanent housing, an act for which he was in 2011 named a "CNN Hero".[11] In 2012, he was appointed a "Cavaliere" (Knight) of the Ordine al Merito della Repubblica Italiana (Order of Merit of the Italian Republic).[12] In 2018, he received the Ellis Island Medal of Honor.[13]

Bruno also operates Chef Bruno's Hospitality Academy, which teaches local underprivileged youth how to prepare for a job in the hospitality industry.[14][unreliable source]

You have to Sign in or create an account to comment this article !
Retrieved from "https://en.everybodywiki.com/index.php?title=Bruno_Serato&oldid=565189"
Categories:
Hidden categories:
This page was last edited on 9 November 2019, at 05:39.
This page has been accessed 344 times.
Content is available under License CC BY-SA 3.0 unless otherwise noted.
Privacy policy
About EverybodyWiki Bios & Wiki
Disclaimers
Mobile view