Drake was the most dominant artist during the 2010s in terms of Billboard chart success[2] and was Spotify's most-streamed artist of the decade.[3] He initially gained recognition as an actor on the teen drama television series Degrassi: The Next Generation in the 2000s. Intent on pursuing a career in music, he left the series in 2007 after releasing his debut mixtape Room for Improvement before releasing two further independent projects, Comeback Season and So Far Gone. He was signed to rapper Lil Wayne's label Young Money Entertainment in 2009. His debut album Thank Me Later was released on June 15, 2010,[4] debuting at number one on the Billboard 200. It was the best-selling debut album for any artist in 2010.[5]

The biggest teen idol of the 2010s, Bieber was the first breakthrough artist of the Canadian Invasion.[2] Discovered at 13 years old by talent manager Scooter Braun after Braun had watched his YouTube cover song videos, Bieber was signed to RBMG Records in 2008. Released when he was 15 years old, Bieber's first single, "One Time", peaked at number 17 on the US Billboard Hot 100. His first record, an extended play titled My World, was released on November 17, 2009. It was certified platinum by the Recording Industry Association of America (RIAA).[6] Bieber's debut studio album, My World 2.0., debuted at number one on the US Billboard 200, making Bieber the youngest solo male act to top the chart since Stevie Wonder in 1963.[7]

Among the most prominent R&B artists of the 2010s, The Weeknd has been credited for advancing the genre through his dark wave style approach.[8] Released in 2011, his trilogy of mixtapes, House of Balloons, Thursday, and Echoes of Silence, quickly garnered him a following and critical recognition from several mainstream publications. In 2012, he signed with Republic Records. His debut studio album Kiss Land (2013) debuted at number two on the Billboard 200, while his second album, Beauty Behind the Madness (2015), debuted at number one and was among the best-selling albums of 2015. Containing the Billboard Hot 100 number-one singles "Can't Feel My Face" and "The Hills", Beauty Behind the Madness was awarded Best Urban Contemporary Album and was nominated for Album of the Year at the 2016 Grammy Awards.[9] 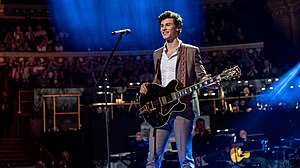 Drake is the highest-certified digital singles artist ever in the United States.[13] He achieved several Billboard chart records; he has the most charted songs (209) of any artists in the history of the Billboard Hot 100,[2] the most simultaneously charted Hot 100 songs in a single week (27), the most time on the Hot 100 (431 weeks), and the most Hot 100 debuts in a week (22).[14] He also has the most number-one singles on the Hot Rap Songs, Hot R&B/Hip-Hop Airplay and Rhythmic Charts.[15][16] Bieber was included in the Forbes list of the top ten most powerful celebrities in the world, in 2011, 2012 and 2013,[17] and became the first artist to surpass 10 billion total video views on Vevo.[18] The Weeknd holds the record for being the first artist to simultaneously hold the top three positions on the Billboard Hot R&B Songs chart with "Can't Feel My Face", "Earned It", and "The Hills". Mendes' first three studio albums, Handwritten (2015), Illuminate (2016), and Shawn Mendes (2018), all debuted atop the Billboard 200; Handwritten made him one of five artists ever to debut at number one before the age of 18 and Shawn Mendes made him the third-youngest artist to achieve three number one albums in the US.[19]

Other Canadian artists who achieved success in the American market during the 2010s included Carly Rae Jepsen and Alessia Cara. Jepsen's 2011 single "Call Me Maybe" was the best-selling single worldwide in 2012, and reached number one in the US.[20] Cara won Best New Artist at the 2018 Grammy Awards.[21]

You have to Sign in or create an account to comment this article !
Retrieved from "https://en.everybodywiki.com/index.php?title=Canadian_Invasion&oldid=871470"
Categories:
Hidden categories:
This page was last edited on 19 July 2020, at 20:40.
This page has been accessed 38 times.
Content is available under License CC BY-SA 3.0 unless otherwise noted.
Privacy policy
About EverybodyWiki Bios & Wiki
Disclaimers
Mobile view