The Chess Olympiad is a biennial chess tournament in which teams representing nations of the world compete. FIDE organises the tournament and selects the host nation. Amidst the COVID-19 pandemic, FIDE held a one-off Online Chess Olympiad with a rapid time control that affected players' online ratings.

The use of the name "Chess Olympiad" for FIDE's team championship is of historical origin and implies no connection with the Olympic Games.

The first Olympiad was unofficial. For the 1924 Olympics an attempt was made to include chess in the Olympic Games but this failed because of problems with distinguishing between amateur and professional players.[1] While the 1924 Summer Olympics was taking place in Paris, the 1st unofficial Chess Olympiad also took place in Paris. FIDE was formed on Sunday, July 20, 1924, the closing day of the 1st unofficial Chess Olympiad.[2]

FIDE organised the first Official Olympiad in 1927 which took place in London.[1] The Olympiads were occasionally held annually and at irregular intervals until World War II; since 1950 they have been held regularly every two years.[1] 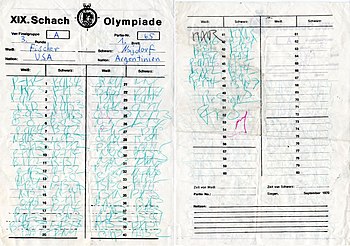 As a sporting federation recognized by the IOC, and particularly as a signatory to the World Anti-Doping Agency (WADA) conventions,[3] FIDE adheres to their rules, including a requirement for doping tests,[4][5] which they are obligated to take at the events such as the Olympiad. The tests were first introduced in 2002 under significant controversy,[6] with the widespread belief that it was impossible to dope in chess. Research carried out by the Dutch chess federation failed to find a single performance-enhancing substance for chess.[7] According to Dr Helmut Pfleger, who has been conducting experiments in the field for around twenty years, "Both mentally stimulating and mentally calming medication have too many negative side effects".[7] Players such as Artur Yusupov,[8] Jan Timman[9] and Robert Hübner[10] either refused to play for their national team or to participate in events such as the Chess Olympiad where drug tests were administered. All 802 tests administered at the 2002 Olympiad came back negative.[11] However, in the 36th Chess Olympiad in 2004, two players refused to provide urine samples and had their scores cancelled.[12][13] Four years later, Vassily Ivanchuk was not penalized for skipping a drug test at the 38th Chess Olympiad in 2008, with a procedural error being indicated instead.[14]

In 2010, a FIDE official commented that due to the work of the FIDE Medical Commission, the tests were now considered routine.[15] In November 2015, FIDE president Kirsan Ilyumzhinov announced they are working with WADA to define and identify doping in chess.[16]

Each FIDE recognized chess association can enter a team into the Olympiad.[1] Each team is made of up to five players, four regular players and one reserve (prior to the tournament in Dresden 2008 there were two reserves[17]).[1] Initially each team played all other teams but as the event grew over the years this became impossible.[1] At first team seeding took place before the competition.[1] Later certain drawbacks were recognized with seeding and in 1976 a Swiss tournament system was adopted.[1]

Soviet Union, other communist countries and Arabic countries did not compete for political reasons.
† The 2022 event was originally planned to be held in Minsk, Belarus, but it was rescheduled to Moscow, which originally was host of the 2020 Olympiad, which was canceled due to the COVID-19 pandemic. FIDE also organized an online olympiad.

Starting from 2008, the first criterion for determining ranking is match point instead of board point. Team scores 2 points for a win, 1 point for a draw and 0 points for a loss (that is, a 4-0 win or 2.5-1.5 win will get the same match point).

The best individual results in order of overall percentage are: 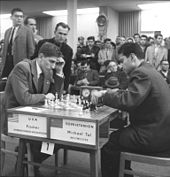 Fischer and Tal at the 1960 Olympiad

Share
Retrieved from "https://en.everybodywiki.com/index.php?title=Chess_Olympiad&oldid=1755215"
Categories:
Hidden categories:
This page was last edited on 4 June 2021, at 17:51.
Content is available under License CC BY-SA 3.0 unless otherwise noted.
This page has been accessed 329 times.
Privacy policy
About EverybodyWiki Bios & Wiki
Disclaimers