Christopher Matthew Ovdiyenko (born August 28, 1974) is a Columbus, Ohio-based contemporary illustrator and designer, and co-founder of Dead On Paper, LLC. He first became known for his playing card designs which feature hand-drawn illustrations with an engraved design aesthetic.

Chris Ovdiyenko was born in New York City, the son of Walter Ovdiyenko and Anna Ovdiyenko. He grew up in Barto, Pennsylvania, attending the Boyertown Area School District, as well as spending a year at The Hill School, a private college preparatory school in Pottstown, Pennsylvania. While in high school, Chris was accepted into and attended the Pennsylvania Governor's School for the Arts, an intensive summer arts program. During this time, he also worked with Val Bertoia, a metal sculptor, who maintained a workshop in Bally, Pennsylvania—a town close to Barto.

Detail of 'Justice' by Chris Ovdiyenko

Ovdiyenko worked in advertising until launching his first Kickstarter campaign in 2013 for custom illustrated playing cards and relief prints of his artwork. He continues to use crowd-funding as the means through which he produces his art.

In July 2013, Chris founded DeadOnPaper.com with his wife, Adria Ovdiyenko.

Calaveras Playing Cards project was successfully funded through Kickstarter on July 22, 2013 raising over $60,000 and attracting 1452 backers.[1] This body of work is themed around the Mexican Day of the Dead holiday, and was inspired by the artwork of José Guadalupe Posada. 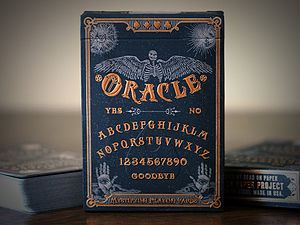 The Oracle Playing Cards project took its inspiration from the spiritualist movement of the late 19th and early 20th centuries. Subject matter explored automatic writing, ouija boards, seances, and spirits. The original Kickstarter was successfully funded on November 8, 2013. It raised over $52,000 from more than 1100 backers.[2]

Funded in February, 2015, the Arcana Playing Cards project was at the time the highest funding for a playing card project on Kickstarter.[3] It merged tarot cards with playing cards and featured hand drawn original compositions for all the Major Arcana cards in a tarot deck. In addition to the playing cards, the Arcana project also included a book, The Illustrated Guide to Arcana.

Hobo Coins was funded through Kickstarter on April 21, 2017. It raised $80,484[4] to create minted coins inspired by hobo nickels from the Great Depression.

Hobo Coins | Series II was funded through Kickstarter on November 26, 2017. It raised $42,286[5] to create minted coins inspired by hobo nickels from the Great Depression.

File:Ecliptic Playing Cards.jpg
Playing cards designed by Chris Ovdiyenko based on Astrology and the Zodiac.

In 2013, Chris Ovdiyenko was featured in The Columbus Dispatch for Calaveras Playing Cards[7]. 614 Magazine labeled his art as having "laborious attention to detail and iconic form[8]" in an March 3, 2015 article. Kardify.com, an online playing card review site, voted the Arcana Cards to be in their "Top 12: Playing Cards of 2015".[9]" In 2018, Max Playing Cards called Chris Ovdiyenko one of the most "talented and successful" playing card artists.[10]

Share
Retrieved from "https://en.everybodywiki.com/index.php?title=Chris_Ovdiyenko&oldid=874094"
Categories:
Hidden categories:
This page was last edited on 20 July 2020, at 09:34.
Content is available under License CC BY-SA 3.0 unless otherwise noted.
This page has been accessed 1,037 times.
Privacy policy
About EverybodyWiki Bios & Wiki
Disclaimers