Coinfloor is a London-based bitcoin exchange established in early 2013.[1]

Coinfloor has launched the first exchange-backed Peer-to-Peer marketplace for bitcoin, "Coinfloor Market", which connects vetted brokers with investors and consumers looking to buy bitcoins. Buyers are able to send funds directly to a broker using a local UK bank transfer. Coinfloor is also the first exchange to employ a sophisticated algorithmic rounding engine for fee calculation.[1] By allowing direct conversion between bitcoins and the British Pound (Sterling), the exchange aims to reduce the inconvenience of a two-step conversion that people holding Sterling used to have to go through.[2]

In October 2013 the company announced raising an undisclosed amount of venture capital funding from Passion Capital and Taavet Hinrikus,[3] co-founder of TransferWise and the first employee at Skype.[3] It was reported that Coinfloor had a major layoff of the majority of its staff in October 2018.[4] Coinfloor's CEO, Obi Nwosu, subsequently clarified that most of the affected staff were actually transitioned to a new company, CoinFLEX, as part of the spin off and sale of one of Coinfloor's subsidiaries in January 2019.[5] 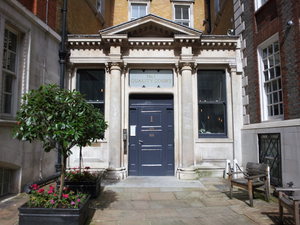 Headquarters of Coinfloor in the City of London.

Coinfloor is not an FCA-regulated entity but has received formal communication from the regulatory body deeming regulation not necessary at this point in time.[1] Bitcoin is currently not classified by the FCA as money and as such is not representative of monetary value. Coinfloor has been working closely with the HMRC on the classification of bitcoin.[6]

Coinfloor was the first bitcoin exchange to be registered as a Bureau de change with HM Revenue & Customs[7] and is registered at Companies House : registration number 08493818, Incorporated: 18/04/2013.[8]

On 19 December 2018 HM Revenue & Customs published a Policy Paper entitled Cryptoassets for Individuals. It sets out how individuals who have crypto assets are taxed in UK. Of particular interest is the clarification regarding Capital Gains Tax treatment of profits. [9]

Coinfloor began opening accounts for European customers on 29 October 2013 and announced it would be open for trading on 5 November 2013.[1] The 5 November opening of trading was delayed due to technical problems, and Coinfloor re-launched on 25 March 2014.

Six weeks from launch Coinfloor became the first ‘Publicly Auditable’ bitcoin Exchange with a blockchain based proof of solvency available monthly to all its users.[10]

A week later Coinfloor announced setting up an over-the-counter market for bitcoin, aimed at investors looking to do large block trades in bitcoin.[11]

On 30 June 2014 Coinfloor began accepting domestic deposits via local bank transfer in an effort to accelerate its local payments services. After three months of operations with Faster Payments, Coinfloor withdrew the option from its offer, after the Isle of Man banks demand that Capital Treasury Services (CTS), the company that linked bitcoin businesses to banks, cuts all ties with the bitcoin industry.

In July 2014 Coinfloor announced the joining of an investor and Coinfloor's new executive chairman Adam Knight,[12] a former managing director from both Goldman Sachs and Credit Suisse.

This article "Coinfloor" is from Wikipedia. The list of its authors can be seen in its historical and/or the page Edithistory:Coinfloor. Articles copied from Draft Namespace on Wikipedia could be seen on the Draft Namespace of Wikipedia and not main one.

Share
Retrieved from "https://en.everybodywiki.com/index.php?title=Coinfloor&oldid=975151"
Categories:
Hidden categories:
This page was last edited on 20 August 2020, at 20:26.
Content is available under License CC BY-SA 3.0 unless otherwise noted.
This page has been accessed 841 times.
Privacy policy
About EverybodyWiki Bios & Wiki
Disclaimers