Courtney Simpson (born May 9, 1985) is an American former pornographic actress.

Simpson responded to Arizona advertisements for nude models in the early 2000s and was first featured in photos on the Amateur Allure web site, performing oral sex, then on her own web site, under the name Cory Heart. She picked Courtney Simpson for her primary stage name based on her own first name, and the last name of singer Jessica Simpson.[2] 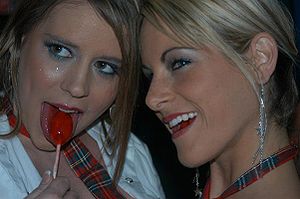 She was nominated for the 2006 AVN Award for Best All-Girl Sex Scene, Video.[3] Her agency-supplied driver between bookings became her offscreen boyfriend, and also began performing in pornographic films under the name Jason Cox. They performed together and with other people.[2] By the end of her first year in the pornographic film industry, Simpson had performed in 182 films.[2]

On December 2, 2005, The Arizona Republic reported that Arizona State University officials were looking into any legal claims they might have in relation to a possible infringement of trademarks and intellectual property over Simpson performing in an ASU cheerleader uniform in the pornographic video Gina Lynn’s Double Dutch.[4] Simpson continued shooting films during the controversy, working five to six days per week.[2]

In September 2006 Simpson announced she would no longer be performing heterosexual scenes on film, to give her more time to go back to college and get her degree. She had made more than 250 films, and was considered one of the industry's most prolific performers.[5] By 2007 she was no longer shooting new material and had completely retired from pornography.[6]

Retrieved from "https://en.everybodywiki.com/index.php?title=Courtney_Simpson&oldid=877171"
Categories:
Hidden categories:
This page was last edited on 21 July 2020, at 06:13.
This page has been accessed 4,793 times.
Content is available under License CC BY-SA 3.0 unless otherwise noted.
Privacy policy
About EverybodyWiki Bios & Wiki
Disclaimers