David William Thomas, Sr. (August 12, 1876 – August 1, 1961), was a Welsh-American "Renaissance man", journalist, publisher, university professor, poet, and attorney who served from 1936 to 1940[1] as mayor of the small city of Minden, the seat of government of Webster Parish in northwestern Louisiana.[2][3]

A native of Cardiff, Wales, United Kingdom, he was the son of David and Sarah Thomas. The Thomases entered the United States in 1883 and settled in Scranton, Pennsylvania, where young Thomas received his primary schooling. He then studied at Cornell University in Ithaca, New York.[2] He later studied at the University of Michigan in Ann Arbor, Michigan.[4]

After college, Thomas was briefly a high school teacher and then a school principal in Lake Charles in Calcasieu Parish in southwestern Louisiana. After several years in Lake Charles, Thomas was hired as professor of Latin, Greek and journalism at Louisiana State University in Baton Rouge. At the time, LSU was located downtown on the site of the Louisiana State Capitol. While Thomas was a professor at LSU, several students from Minden, including future judge Harmon Caldwell Drew, were students there. Later, H. C. Drew's son, R. Harmon Drew, Sr., a judge and later state representative, was a pallbearer at Thomas's funeral, along with other prominent civic figures, including another mayor, John T. David.[2]

While he was on the LSU faculty, Thomas also attended law school. He graduated in 1909 with an Bachelor of Laws degree but did not begin practicing law until 1934. He remained in his teaching position at LSU for several more years until the early 1920s, when he became publisher of a small daily newspaper, The Baton Rouge News, forerunner to the modern Baton Rouge Advocate. He was later an editor of a weekly paper in Hammond in Tangipahoa Parish. He left Hammond in 1923 in his 47th year to come to Minden, where he was on the staff of the new The Minden Tribune, a forerunner to the Minden Press-Herald, which merged into a daily newspaper in 1966, five years after Thomas's death.[2]

In 1925, Thomas became professor of journalism at Louisiana Tech University (then Louisiana Polytechnic Institute) in Ruston in Lincoln Parish in North Louisiana. His poetry was published in regional and national literary anthologies. Thomas remained on the faculty at Tech for several years, as a part-time instructor in his last year there. He returned to The Minden Tribune in 1927 before it merged with The Webster Signal to become The Signal-Tribune. Once again, he returned to higher education: professor of journalism at the University of Arkansas at Fayetteville.[2]

While in Arkansas, Thomas wrote letters to the editors of local newspapers to remain in touch with the community. He returned to Minden in 1934 and never left. Twenty-five years after he had received his law degree from LSU, Thomas opened a private practice in Minden with R. F. Langston, which lasted until Langston's death in 1936. He then maintained a solo practice.[2]

Thomas ran unsuccessfully for mayor of Minden in the spring of 1934, having lost a Democratic runoff election on May 15 to former Mayor Henry L. Bridges, 624 (63 percent) to 366 (37 percent).[5] In that race, Thomas called for a reduction in municipal utility rates and for the establishment of a canning plant to assist residents in the preservation of garden foods.[6] The incumbent that year, Connell Fort, who had preceded future Governor Robert F. Kennon as mayor prior to 1926 and who had handily unseated Bridges in 1932, was eliminated in the first primary held on April 10, 1934.[7]

On March 2, 1936, at the age of sixty, Thomas was elected to the first of two two-year terms as mayor of Minden. He polled 736 votes (51.9 percent) to incumbent Henry Bridges' 682 (48.1 percent).[8] As mayor under the former commission government, since replaced by the single-member district mayor-council format, Thomas pressed for paving all major streets. An amateur architect, Thomas designed the former Minden Community House in Victory Park,[2] but the original structure has long been superseded by a more modern building.

During Thomas's second term, to which he was elected without opposition in 1938,[9] controversy arose over the sale of alcoholic beverages. The city had allowed such sales when the Twenty-first Amendment to the United States Constitution was adopted in December 1933. In the fall of 1938, a local option election was held to decide whether Minden would impose prohibition at the municipal level. The city was voted dry effective January 1, 1939. The prohibition issue may have ruined Thomas politically, for he finished in third place in the 1940 primary election. The ultimate winner, attorney Floyd D. Culbertson, Jr., served through November 1942, when he resigned to enter military service during World War II.[2] Thomas unsuccessfully challenged Culbertson in the 1942 election and then ran in the 1946 Democratic primary. In 1946, he finished a weak third, with the contest being won in a runoff on May 7 by John T. David, who defeated insurance agent and later banker Castle Overstreet Holland (1895–1981), a native of Greensburg in St. Helena Parish.[10]

In 1950, Thomas and Culbertson, who had returned to Minden from military service, were opposing lawyers in a legal dispute over a $196 debt deemed collectible to the plaintiff by City Judge R. Harmon Drew, Sr. The case was appealed unsuccessfully to the Louisiana Court of Appeal for the Second Circuit in Shreveport.[11][12]

Thomas remained active in local Democratic politics. From 1948 until his death, he served as the Webster Parish attorney for the inheritance collector and maintained his own law practice.[2] In 1954, Thomas ran a weak third in the race for Minden city judge, a position vacated by the incumbent R. Harmon Drew, Sr. Attorney Cecil C. Lowe defeated Alton Eugene Frazier (1922-2001) in a runoff election for the judgeship.[13]

Thomas was not the first Minden mayor to have a background in journalism; so did W. Jasper Blackburn, who served as a Democrat from 1855 to 1856. Blackburn became a Republican during the American Civil War and served briefly in the United States House of Representatives and the Louisiana State Senate.[14]J. Frank Colbert, a former state representative who served as mayor from 1944 to 1946, also had newspaper experience. Connell Fort was also a newspaperman during much of his working career. Twenty-six years after Thomas left the office of mayor, still another former newspaperman, Tom Colten, became the city's first of thus far three Republican mayors. 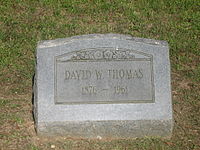 The grave of former Mayor David William Thomas is located near those of two other Minden mayors, John T. David and J. Frank Colbert in Minden Cemetery.

A Southern Baptist, Thomas presented Bibles to high school students upon their graduations. Services were held at the Emmanuel Baptist Church in Minden, then a new sanctuary, with the Reverend T. W. Leachman officiating. Thomas is interred at Minden Cemetery.[2]

Thomas's obituary does not mention his former wife, Alice Singletary LeBlanc (1890-1964), from whom he was divorced. The couple was listed in the 1920 census as living together in Baton Rouge, when she was twenty-nine, and he was forty-three. They were married for at least eleven years.[15] Alice's second husband was Dr. J. Hall LeBlanc (1880-1952).[16] Alice and Hall LeBlanc are interred in the same plot at Roselawn Memorial Park and Mausoleum in Baton Rouge.[17] David Thomas was survived by three daughters, all since deceased: (1) Gwendolyn Singletary-Thomas Neitzel (1910-2000), is interred with her husband, Robert Stuart Neitzel (1911-1980), and their son, Stuart Allen Neitzel (1948-2013), at Cushman Cemetery in Marksville in Avoyelles Parish;[18] (2) Sarah Allen Thomas Fasce (1911-2006) of Baton Rouge, who subsequently died in Charlottesville, Virginia, is interred in the LeBlanc plot at Roselawn in Baton Rouge; and (3) Singletary "Terry" Thomas Whipple (1917-2008) of Baton Rouge, named for both parents, is also interred in the LeBlanc plot at Roselawn,[19] A son, David Thomas, Jr., lived in Des Plaines, Illinois, in 1961, at the time of his father's death,[2] but resided in Sun City, Arizona, in 2006, at the time of the death of his sister, Sarah, who was named for their paternal grandmother. The obituaries of neither Gwendolyn nor Sarah mention their father.[20]

Others articles of the Topics Biography AND Pennsylvania : William Hawthorn Lynch

Others articles of the Topic Wales : Rhondda Outlaws

Retrieved from "https://en.everybodywiki.com/index.php?title=David_William_Thomas&oldid=682171"
Categories:
Hidden categories:
This page was last edited on 30 January 2018, at 05:25.
This page has been accessed 272 times.
Content is available under License CC BY-SA 3.0 unless otherwise noted.
Privacy policy
About EverybodyWiki Bios & Wiki
Disclaimers