Fort was born in rural Bellevue in Bossier Parish, located west of Minden, to Thomas Moore Fort (1820–1887), a lawyer originally from Twiggs County, Georgia, and the former Martha Ann "Mattie" Connell (1835–1927), a native of Columbus, Mississippi. The couple married in 1856 in nearby Fillmore in eastern Bossier Parish. In 1872, Thomas and Mattie Fort moved to Minden to rear their family.[1] T. M. Fort, or "Colonel Fort", as he was known, was mayor of Minden from 1875 to 1876, when terms were for one year each. T. M. and Connell Fort are apparently the only father-son mayors of the city, at least since 1868; records before that date are fragmentary or nonexistent.[2]

Connell Fort was a deputy in the second term of Webster Parish Sheriff Daniel Webster Pratt, who served from 1896 to 1900.[8] From 1900 to 1908, Fort, a Democrat, was a member of the Minden City Council, on which he pushed for the establishment of concrete sidewalks.[7] In 1917, E. L. Stewart, a former member of the Louisiana House of Representatives for Webster Parish, Stewart's fellow attorney and brother, Daniel Webster Stewart Sr. (1857–1935), and Alberta Glass (1834-1937), a former soldier of the Confederate States Army,[9] were sued by the Town of Minden for non-payment of the expense for the mandatory construction of sidewalks abutting their properties, based on a 1902 state law, which the plaintiffs challenged unsuccessfully on double appeal to the Louisiana Court of Appeal for the Second Circuit in Shreveport and the Louisiana Supreme Court in New Orleans. The three did not request the sidewalks and sought to shield themselves from the associated costs.[10]

In 1908, Fort and later Mayor J. Frank Colbert managed the successful gubernatorial campaign in Webster Parish of Jared Y. Sanders Sr., of Franklin in St. Mary Parish in south Louisiana. Governor Sanders named Fort as the conservation agent for northwest Louisiana. Sanders left office in 1912, and Fort returned to the Minden City Council for another eight years. In 1914, Fort joined Colbert in the newspaper business in Minden. During Fort's second council stint, he pushed for the paving of the main business district of Minden.[7]

During the first term of Mayor W. Matt Lowe, councilman Fort supported the purchase of the municipal generating station after a fire in 1917 swept through the Minden Lumber Company and the former Minden Electric Light and Power Company, the previous owner of the station.[11] Minden is one of twenty municipalities in Louisiana in which residences and businesses still purchase their electricity from the city, with profits diverted to finance the costs of government.[12]

In 1922, Fort was elected to the first of his two consecutive two-year terms as mayor to succeed Mayor J. Berry Sandefur. Mayor Fort worked to bring to Minden the Louisiana and Arkansas Railway shop facility from its former location in Stamps in Lafayette County in southwestern Arkansas. The city paved ten miles (16 km) in concrete, and efforts were made to rid Minden of mosquitoes.[7] Natural gas lines were laid. A bond issue financed the establishment of the city sewerage system. Modern fire-fighting equipment was also purchased during Fort's tenure.[7]

In 1926, Fort was unseated in his bid for a third term by 23-year-old attorney Robert F. Kennon, who became the youngest mayor in the state. A native of Dubberly in south Webster Parish and the son of a downtown Minden grocer, Kennon did not seek reelection in 1928[13] but was instead elected as district attorney in 1930, judge in 1940, and governor in 1952.

In 1932, Fort staged a comeback for a third term when he unseated Kennon's successor as mayor, Henry L. Bridges, a clothing merchant originally from Athens in Claiborne Parish.[14] Fort polled 709 votes to Bridges's 437 in the primary election held on April 12, 1932.[15] In his third term, Fort pushed successfully for further road construction and the establishment of municipal parks and tennis courts.

On May 1, 1933, a cyclone swept through Minden and resulted in fifty deaths and more than four hundred injured. Mayor Fort called for the Louisiana National Guard to help in the rescue of victims and to keep order. His problems were also compounded by some fifty thousand sightseers who came to Minden to view the damage and created traffic bottlenecks.[16]

The year 1933 was further devastating to Minden, with the death of the sheriff, two bank failures, and a large fire, which impaired the health and caused the death the next year of Fire Chief Ben F. Turner Sr. (1883–1934).[17] Fort was the first mayor to serve six years in the office since the banker Abner Drake Turner (1877-1953), who held the position consecutively for three terms from 1910 to 1916.[18] 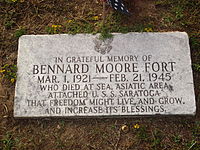 On Armistice Day 1933, Fort's son, John L. Fort, shot to death a city council member who had quarreled with Mayor Fort. The councilman, elected in 1932, was Abraham Brisco Nation Sr. (1886–1933), a native Texan and a foreman of the Louisiana and Arkansas Railway with twelve children, at least one of whom, Oree B. Nation (1910–1936), died early in life.[19] Connell Fort and Nation engaged in a verbal exchange in the municipal tax office on the Saturday afternoon of November 11. The dispute grew from Nation's attempt to fire the city sanitary inspector without first consulting the full council. The council in retaliation switched Nation to commissioner of public safety and made W. W. Webster, a local car dealer, the chairman over sanitation.[20]

Mayor Fort broke his cane across Nation. As Nation lifted the cane back toward the mayor,[21] John Fort pulled a .38 caliber pistol from his trousers and shot Nation, who died before he could reach the nearby Minden Sanitarium, since the Minden Medical Center. "I'm getting tired of you[r] treating my father like you have," shouted John Fort.[22][23]

Sheriff O. H. Haynes Sr. transported John Fort to Shreveport, where he was held under a bill of information awaiting presumed indictment from a grand jury.[22] The Louisiana Supreme Court months later denied Fort's motion for bail without a preliminary hearing.[24] However, with no indictment ever forthcoming, Fort was soon a free man.

Nation, meanwhile, was interred within twenty-four hours of his death in the newer section of Minden Cemetery off Goodwill Street. Services held at the Nation home preceded the interment amid an overflow of mourners.[25]

Nation's children included Daniel Webster Nation (1922-2014), who from 1941 to 1983 worked for the L&A, and the educator, principal, and football coach Patrick Cary Nation (1918–2005), who lost a race in 1974 for the Minden City Council to later Mayor Bill Robertson. A Nation grandson, Billy Joe Booth, became a professional football player in Canada but died early in life in a private plane crash.[26] A granddaughter, Kathryn Diana Nation (1946–1968), daughter of Webster and Kathryn Watson Nation, died in 1968 in an automobile accident while commuting to her elementary school teaching job in Sarepta in Webster Parish, shortly before her pending marriage.[27]

Brisco Nation was succeeded on the city council by another railroad employee, Grady L. Hancock, an appointee of Governor Oscar K. Allen. Hancock said that he did not solicit the interim appointment, had no political agenda other than support for U.S. President Franklin D. Roosevelt, and would make an effort to work with Mayor Fort and the entire council.[28]

Meanwhile, John Fort was incarcerated for two years in Bossier Parish, within the 26th Judicial District, awaiting a true bill against him that the grand jury never presented. The district attorney at the time was the same Robert F. Kennon, who had unseated Connell Fort for mayor in 1926.[1] No indictment against John Fort was ever presented despite the testimony of two eyewitnesses to the shooting, John L. Garrett and J.R. Murph, then the secretary of the city council.[22]

In the first primary election held on April 10, 1934, Fort was eliminated from his bid for a fourth nonconsecutive term as mayor.[29] Instead, former Mayor Henry L. Bridges was placed into a runoff election against David William Thomas, a former university professor, journalist, and a native of Wales. In the runoff election held on May 15, 1934, Bridges handily defeated Thomas, 624 to 377.[30] Thomas rebounded in 1936 to win the first of his two terms as mayor. Fort never again held office; his defeat was attributed to fallout from the shooting death of Brisco Nation.[31]

Connell Fort was Methodist. Upon his death, Fort was interred in the old section of the Minden Cemetery in the Miles plot, where his first wife's family is buried. This plot is behind his parents' graves. In addition to his second wife and children from both marriages, Fort was survived by two brothers, Walton Fort (1857–1940) of Minden,[5] a member of the Webster Parish Police Jury from 1932 to 1936, preceding W. Matt Lowe,[32] and Moses Fort of Louisville, Kentucky. Pallbearers included his business colleague and later mayor, J. Frank Colbert, and Judge Harmon Caldwell Drew,[7] who was subsequently unseated three years later in 1940 by then District Attorney Robert F. Kennon.

Share
Retrieved from "https://en.everybodywiki.com/index.php?title=Connell_Fort&oldid=876501"
Categories:
Hidden categories:
This page was last edited on 21 July 2020, at 01:12.
Content is available under License CC BY-SA 3.0 unless otherwise noted.
This page has been accessed 1,031 times.
Privacy policy
About EverybodyWiki Bios & Wiki
Disclaimers