Dhakeswari Mata Temple is a Hindu temple located in Kumortuli, Near Sovabazar, Kolkata. Situated in eastern bank of hooghly river near Kumartolly area. The presiding deity of the temple is Devi Durga, which was taken to Kolkata in 1947 from Dhakeswari Temple in Dhaka, Bangladesh.[1] Now, the temple of Kolkata is quite deserted as most of the people are not aware of its historical backdrop and importance.[2]

Widely believed hearsay of the idol is like, Queen (wife of King Bijoy Sen) once went to Langolbond for bathing. On her way back she gave birth to a son, Ballal Sen.[3] Later he became one of the powerful king of Sena destiny. After ascending to the throne, Ballal Sen built a temple to glorify his birthplace, which is known as Dhakeswari temple, Bangladesh.[4]

One day Ballal Sen dreamt that deity of Durga covered under the jungle and very soon he uncovered the deity from there and built a temple, later named for Dhakeswari. Etymological meaning is covered or hidden deity as it was covered in jungle. To Bengali Hindus, Dhakeswari considered as presiding deity of Dhaka, which is an incarnation or form of Goddess Durga, the Adi Shakti. The idol of Durga is called Dhakeswari .[5] 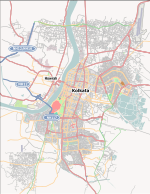 In 1947, during the Partition of India, priest of the temple taken the idol to Kolkata from Dhaka due to security reason.[1][6][7]

A Tiwari family from Azamgarh was appointed by the royal family for daily worship of the deity. In 1946, the descendants of that family, Prallad Kishore Tiwari (or Rajendra Kishore Tiwari) taken the idol in a highly confidential aircraft to Calcutta (now Kolkata) and re-appointed, where they still serve the Goddess continuously. After taken to Kolkata, next 2 or 3 years the idol was worshipped in Debendranath Chowdhury home.[1]

By 1950, the businessman Debendranath Chowdhary built the temple of Goddess in Kumortuli area and established some of the Goddess' property for her daily services.[1]

The Dhakeshwari devi worship is different from the traditional Durga puja of Bengal. According to the current priest of the temple, Shaktiprasad Ghosal, during Durga Puja, the goddess is worshiped in accordance with the Navratri or nine night rituals of Northern India.[1]

The idol is 1.5 feet tall, has ten arms, mounted on her lion in the form of Katyani Mahishasurmardini Durga. On her two sides are Laxmi, Saraswati, Kartik and Ganesh.[1] And the mount, lion, is Mythological Lion.

Retrieved from "https://en.everybodywiki.com/index.php?title=Dhakeshwari_Mata_Temple,_Kumortuli&oldid=218324"
Category:
Hidden categories:
This page was last edited on 12 November 2018, at 03:29.
This page has been accessed 1,658 times.
Content is available under License CC BY-SA 3.0 unless otherwise noted.
Privacy policy
About EverybodyWiki Bios & Wiki
Disclaimers