Dia Frampton[1] (born October 2, 1987), is an American singer-songwriter and was the lead singer of the band Meg & Dia. She was the runner-up in the inaugural season of The Voice. She also was the lead singer in her band, ARCHIS before continuing her solo career.

Dia Frampton attended Dixie High School in St. George, Utah and Shadow Ridge High School in Las Vegas, Nevada. Dia graduated early by homeschooling her senior year, and at the same time attending public school. Dia then moved to Salt Lake City with her sister to further their music career. She cites Modest Mouse, Tom Petty and the Heartbreakers, Joni Mitchell, The Avett Brothers, Rocky Votolato, Ben Folds, Etta James, Death Cab for Cutie, The Cranberries, and Cursive as influences.[2] During live performances, Frampton plays percussion instruments, such as the cowbell and tambourine, and occasionally a Casio Privia keyboard. She almost always performs without shoes on. She also does not like to eat anything within two hours of performing. Her father is an American of English and Dutch ancestry and her mother is Korean, originally from Seoul. Frampton often recorded a "song diary," an impromptu recorded song, on her MySpace page. She explained, "It was something very raw, and to be honest, something that I was slightly embarrassed to put up because of the quality but I did anyways, for any of our listeners who would care to hear something not hot off the production belt, but something more organic and 'home made.' It made me feel better to share my feelings with people who could connect, and I think that is what happened with many."[3]

Dia Frampton was a contestant (and eventual runner-up) on the first season of The Voice on NBC, introduced as a children's story author. Frampton stated that she had originally joined the show only with the intention of promoting Cocoon and had not expected that she would make it that far in the competition.[4] She was selected to be on the team of coach Blake Shelton, who stated, "when I heard your voice, I started to smile." Frampton advanced through the show's quarter-finals and semi-finales after renditions of "Heartless" and "Losing My Religion". Notably, the aforementioned singles were the highest charting iTunes digital songs by any contestant on The Voice during its respective voting eligibility period, with "Inventing Shadows" topping the charts at No. 1. Following the season finale on June 29, 2011, "Inventing Shadows" debuted at No. 20 on the Billboard Hot 100 with 137,000 downloads sold. As of July 7, 2011 Frampton's The Voice digital releases have sold 480,000 downloads.[5]

Performances on The Voice

She was the opening act for her coach, Blake Shelton, on his Well Lit & Amplified tour. Shelton insisted that she had earned her spot on his tour and he was not doing her any favors.[7] She later was a supporting act for The Fray in their sold out US tour in the Midwest and the West Coast from April to May 2011.[8] Her own solo US tour took place from February to July 2012,[9] with Canadian singer/songwriter Andrew Allen as her opening act.[10]

She covered the Korean song, "Lonely" by 2NE1, as an acoustic ballad in English for allkpop.com to promote her later concert in Seoul, Korea.[11] On December 30, 2012, she sang a solo of "Heartless" and performed "We Are The Champions" with the final 8 of The Voice of Vietnam.[12] In January 2013, Dia held a small tour, staging concerts across Southeast Asian countries Vietnam, Singapore, Philippines, Thailand, Malaysia and Indonesia.[13] She also collaborated with Singto Numchok on his singles "Gift" and "Coffee Mate" in Thailand.[14] 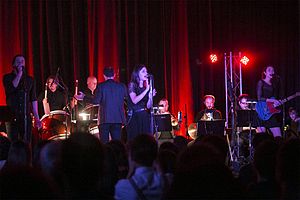 Frampton was featured on "Heart On the Floor", which is a track on The Summer Set's new album, Legendary. The album was released on April 16, 2013. She was also featured on Never Shout Never's Christmas EP, singing "Under the Mistletoe"[15] and on The Crystal Method's new single "Over It", which was featured on their self-tiled album on January 14, 2014. As of January 2014, Dia is now the opening act for the James Blunt Moon Landing Tour. On April 29, 2014 Lindsey Stirling released her album Shatter Me on which Dia collaborated on the songs "We Are Giants" and "Shatter Me". She was also featured in the single "Stay" by Australian DJ tyDi which was released on April 8, 2014.[16]

In June 2014, it was announced that after the release of "Red," Frampton had been dropped from Universal Republic. It was also announced that her new album would be an EP, and not a solo album but under the name of her new band, ARCHIS.[17] Two singles were released on this EP, "Blood" and "I Need You." The music video for "Blood" was released on June 2, 2014. In August 2014, Frampton announced that Archis had been signed to a new label, and that the EP would be released in January 2015.[18] The EP was produced by her frequent collaborator Joseph Trapanese.

On March 17, Interscope Records released Insurgent: Original Motion Picture Soundtrack. The song "Holes In the Sky" was written by Anthony Gonzalez and Dia Frampton and is performed by M83 and HAIM.[19]

After the release of ARCHIS's EP, the band began working on a full-length LP, to be released in early 2016.[20] However, after releasing a personal essay in August 2016 it was revealed that the LP would be released under her own name and would be titled Bruises. Frampton also revealed that the LP would be produced by Dan Heath.[21] On October 5, 2016, she premiered the lead single off the LP titled "Golden Years." The single was released on October 7, 2016 as part of an EP with the same name, serving as a preview for the LP which was released on March 3, 2017.[22] To coincide with the pre-order of "Bruises" becoming available, Frampton released another single, "Gold & Silver".[23] After the album's release, Frampton released music videos for the tracks "Don't Look Back", "Dead Man" and "Crave". The latter two being given official single treatment. Throughout 2017, Frampton continued to release music in the form of collaborations and guest appearances with other artists. These include Fabian Mazur, Witt Lowry, Illenium, Kaskade, tyDi and Christopher Tin. Dia Frampton has also pursued acting, appearing in Criminal Minds and several short films. In December 2017, Frampton released "Yule Tunes" as an EP, consisting of 3 cover songs and one original Christmas song - "The Nice List".

Retrieved from "https://en.everybodywiki.com/index.php?title=Dia_Frampton&oldid=386730"
Categories:
Hidden categories:
This page was last edited on 24 April 2019, at 17:19.
This page has been accessed 321 times.
Content is available under License CC BY-SA 3.0 unless otherwise noted.
Privacy policy
About EverybodyWiki Bios & Wiki
Disclaimers
Mobile view