Dominick DeLuise (August 1, 1933 – May 4, 2009) was an American actor, voice actor, comedian, director, producer, chef and author. He was the husband of actress Carol Arthur and the father of actor, director, pianist, and writer Peter DeLuise, and actors David DeLuise and Michael DeLuise.[1] He starred in a number of movies directed by Mel Brooks, in a series of films with career-long best friend Burt Reynolds, and as a voice actor in various animated films by Don Bluth.

DeLuise was born in Brooklyn, New York, to Italian American parents Vincenza "Jennie" (née DeStefano), a homemaker, and John DeLuise, a public employee (garbage collector). He was the youngest of three children, having an older brother, Nicholas "Nick" DeLuise, and an older sister, Antoinette DeLuise-Daurio.[1] DeLuise graduated from Manhattan's High School of Performing Arts and later attended Tufts University in Medford, Massachusetts.[2] DeLuise was Roman Catholic and had a particular devotion to the Virgin Mary.[3]

DeLuise generally appeared in comedic parts, although an early appearance in the movie Fail-Safe as a nervous USAF technical sergeant showed a broader range. His first acting credit was as a regular performer in the television show The Entertainers in 1964. He gained early notice for his supporting turn in the Doris Day film The Glass Bottom Boat (1966). In his review in The New York Times, Vincent Canby panned the film but singled out the actor, stating, "[T]he best of the lot, however, is a newcomer, Dom DeLuise, as a portly, bird-brained spy."[8]

In the 1970s and 1980s, he often co-starred with Burt Reynolds. Together they appeared in the films The Cannonball Run and Cannonball Run II, Smokey and the Bandit II, The End, All Dogs Go to Heaven and The Best Little Whorehouse in Texas. DeLuise was the host of the television show Candid Camera from 1991 to 1992. He was a mainstay of Burke's Law, an American television series that aired on CBS during the 1993–94 and 1994–95 television seasons.

DeLuise also lent his distinct voice to various animated films and was a particular staple of Don Bluth's features, playing major roles in The Secret of NIMH, An American Tail, A Troll in Central Park and All Dogs Go to Heaven. All Dogs Go to Heaven also featured Reynolds' voice as Charlie B. Barkin, the cheeky anti-hero, and DeLuise voiced Itchy Itchiford, Charlie's best friend, wing-man and later partner in business. Unlike DeLuise, however, Reynolds did not voice Charlie in any of the eventual film sequels, TV episodes, TV-episode sequels, or TV series. DeLuise also voiced the legendary character of Charles Dickens' Fagin in the Walt Disney film Oliver & Company and made voice guest appearances on several animated TV series. 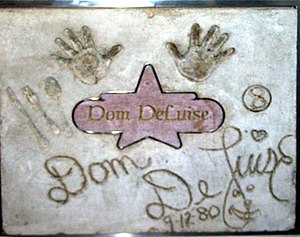 The handprints of Dom DeLuise in Atlantic City, New Jersey

TV producer Greg Garrison hired DeLuise to appear as a specialty act on The Dean Martin Show. DeLuise ran through his "Dominick the Great" routine, a riotous example of a magic act gone wrong, with host Martin as a bemused volunteer from the audience. Dom's catch phrase, with an Italian accent, was "No Applause Please, Save-a to the End." The show went so well that DeLuise was soon a regular on Martin's program, participating in both songs and sketches. Garrison also featured DeLuise in his own hour-long comedy specials for ABC. (Martin was often off-camera when these were taped, and his distinctive laugh can be heard.)

In 1968, DeLuise hosted his own hour-long comedy variety series for CBS, The Dom DeLuise Show. Taped in Miami at The Jackie Gleason Theater, it featured many regular Gleason show cast members including The June Taylor Dancers and The Sammy Spear Orchestra. DeLuise's wife Carol Arthur also regularly appeared. The 16-week run was the summer replacement for The Jonathan Winters Show. He later starred in his own sitcom, Lotsa Luck (1973-1974).

DeLuise was probably best known as a regular in Mel Brooks' films. He appeared in The Twelve Chairs, Blazing Saddles, Silent Movie, History of the World, Part I, Spaceballs, and Robin Hood: Men in Tights. Brooks' late wife, actress Anne Bancroft, directed Dom in Fatso (1980).[9] He also had a cameo in Johnny Dangerously as the Pope and in Jim Henson's The Muppet Movie as a wayward Hollywood talent agent who comes across Kermit the Frog singing "The Rainbow Connection" in the film's opening scene. He also guest-starred in Season 2 Episode 11 of The Muppet Show, where he interacted with Miss Piggy and appeared with fellow Brooks regulars Gene Wilder (who directed the film as well), Marty Feldman, and Madeline Kahn in The Adventure of Sherlock Holmes' Smarter Brother, as well as alongside Wilder and Gilda Radner in a later Gene Wilder-directed film, Haunted Honeymoon. He also appeared in Stargate SG-1 as Urgo.

DeLuise exhibited his comedic talents while playing the speaking part of the jailer Frosch in the comedic operetta Die Fledermaus at the Metropolitan Opera, playing the role in four separate revivals of the work at the Met between December 1989 and January 1996. In the production, while the singing was in German, the spoken parts were in English. A lifelong opera fan, he also portrayed the role of L'Opinion Publique in drag for the Los Angeles Opera's production of Offenbach's Orpheus in the Underworld.[10]

An avid cook and author of several books on cooking, he appeared as a regular contributor to a syndicated home improvement radio show, On The House with The Carey Brothers, giving listeners tips on culinary topics.[11] He was also a friend and self-proclaimed "look-alike" of famous Cajun chef Paul Prudhomme and author of seven children's books.

In 1964, while working in a Provincetown, Massachusetts, summer theater, DeLuise met actress Carol Arthur. They married in 1965[12][13] and had three sons, all of whom are actors: Peter, Michael, and David DeLuise.[13]

DeLuise died of kidney failure on May 4, 2009, at Saint John's Health Center in Santa Monica, California at age 75.[13] He had been battling cancer for more than a year prior to his death.[14]

Burt Reynolds paid tribute to Deluise in the Los Angeles Times, saying: "As you get older and start to lose people you love, you think about it more, and I was dreading this moment. Dom always made you feel better when he was around, and there will never be another like him."[15] Mel Brooks also made a statement to the same paper, telling them that DeLuise "created so much joy and laughter on the set that you couldn’t get your work done. So every time I made a movie with Dom, I would plan another two days on the schedule just for laughter. It's a sad day. It's hard to think of this life and this world without him."[12]

Animation (and other voice work)[edit]

Retrieved from "https://en.everybodywiki.com/index.php?title=Dom_Deluise&oldid=569159"
Categories:
Hidden categories:
This page was last edited on 15 November 2019, at 20:52.
This page has been accessed 805 times.
Content is available under License CC BY-SA 3.0 unless otherwise noted.
Privacy policy
About EverybodyWiki Bios & Wiki
Disclaimers