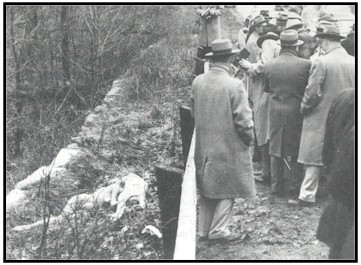 Dump job site where the bodies of the Grimes sisters were found.

In police work, a dump job is a type of murder in which the victim's body is transported to another location and abandoned, usually in a deserted area.[1]

The intent of a dump job is to hide someone's association with the murder. This may be direct responsibility for the killing or involvement in surrounding circumstances.

This article "Dump job" is from Wikipedia. The list of its authors can be seen in its historical and/or the page Edithistory:Dump job. Articles copied from Draft Namespace on Wikipedia could be seen on the Draft Namespace of Wikipedia and not main one.

Retrieved from "https://en.everybodywiki.com/index.php?title=Dump_job&oldid=884644"
Categories:
Hidden category:
This page was last edited on 22 July 2020, at 22:47.
This page has been accessed 361 times.
Content is available under License CC BY-SA 3.0 unless otherwise noted.
Privacy policy
About EverybodyWiki Bios & Wiki
Disclaimers
Mobile view