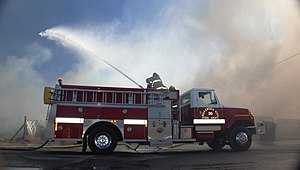 E-One Fire Trucks Inc is an emergency services manufacturer and marketer based in Ocala, Florida.

Founded in 1974 as Emergency-One, E-One has a staff of roughly 900 in four plants in the United States.

E-One was acquired by Federal Signal Corporation, a diversified, billion-dollar Oak Brook, Ill., enterprise in 1979. In 1992, Federal Signal purchased Canadian fire apparatus builder Superior Emergency Equipment and in 1998 bought Saulsbury Fire Equipment of Preble, New York. E-One has sold more than 25,000 vehicles worldwide. In 2004, E-One announced the closure of the Saulsbury plant. Superior Emergency Equipment was renamed E-One Canada in 2003, then the plant was closed and all operations were move to Ocala, FL in 2006.

Customers include some of the largest cities in the US, including the fire departments in Boston, Chicago and formerly New York City.

E-One produces many of their vehicles with custom cabs branded as the Cyclone II, Typhoon and Quest. The Quest cab debuted in April 2007 at the Fire Department Instructor's Conference in Indianapolis, Indiana. A new Typhoon cab was released at FDIC 2019.[2]

This article "E-One" is from Wikipedia. The list of its authors can be seen in its historical and/or the page Edithistory:E-One. Articles copied from Draft Namespace on Wikipedia could be seen on the Draft Namespace of Wikipedia and not main one.

Retrieved from "https://en.everybodywiki.com/index.php?title=E-One&oldid=1612777"
Categories:
Hidden categories:
This page was last edited on 8 April 2021, at 20:57.
This page has been accessed 239 times.
Content is available under License CC BY-SA 3.0 unless otherwise noted.
Privacy policy
About EverybodyWiki Bios & Wiki
Disclaimers
Dark mode