Heat, a form of energy, is partly potential energy and partly kinetic energy 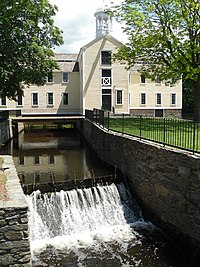 The consideration of energy quality was a fundamental driver of industrialization from the 18th through 20th centuries. Consider, for example the industrialization of New England in the 18th century. This refers to the construction of textile mills containing power looms for weaving cloth. The simplest, most economical and straight-forward source of energy was provided by water wheels, extracting energy from a millpond behind a dam on a local creek. If another nearby landowner decided to also build a mill on the same creek, the construction of their dam would lower the overall hydraulic head to power the existing waterwheel, thus hurting power generation and efficiency. This eventually became an issue endemic to the entire region, reducing the overall profitability of older mills as newer ones were built. The search for higher quality energy was a major impetus throughout the 19th and 20th centuries. For example, burning coal to make steam to generate mechanical energy would not have been imaginable in the 18th century; by the end of the 19th century, the use of water wheels was long outmoded. Similarly, the quality of energy from electricity offers immense advantages over steam, but does not become economic or practical until the 20th century.

The above example focused on the economic impacts of the exploitation of energy. A similar scenario plays out in nature and biology, where living organisms can extract energy of varying quality from nature, ultimately driven by solar energy as the primary driver of thermodynamic inequilibrium on Earth.[1][2] The ecological balance of ecosystems is predicated on the energy flows through the system. For example, rainwater drives the erosion of rocks, which liberates chemicals that can be used as nutrients; these are taken up by plankton, using solar energy to grow and thrive; whales obtain energy by eating plankton, thus indirectly using solar energy as well, but this time in a much more concentrated and higher quality form.

Note that water wheels are driven by rainwater as well, via the solar evaporation-condensation water cycle; thus ultimately, industrial cloth-making was driven by the day-night cycle of solar irradiation. This is a holistic view of energy sources as a system-in-the-large. Thus, discussions of energy quality can sometimes be found in the Humanities, such as dialectics, Marxism and postmodernism. This is effectively because disciplines such as economics failed to recognize the thermodynamic inputs into the economy (now recognized as thermoeconomics), while disciplines such as physics and engineering were unable to address either the economic impacts of human activity, nor the impacts of thermodynamic flows in biological ecosystems. Thus, the broad-stroke, global system-in-the-large discussions were taken up by those best trained for the nebulous, non-specific reasoning that such complex systems require. The resulting mismatch of vocabulary and outlook across disciplines can lead considerable contention.

According to Ohta (1994, pp. 90–91) the ranking and scientific analysis of energy quality was first proposed in 1851 by William Thomson under the concept of "availability". This concept was continued in Germany by Z. Rant, who developed it under the title, "die Exergie" (the exergy). It was later continued and standardised in Japan. Exergy analysis now forms a common part of many industrial and ecological energy analyses. For example, I.Dincer and Y.A. Cengel (2001, p. 132) state that energy forms of different qualities are now commonly dealt with in steam power engineering industry. Here the "quality index" is the relation of exergy to the energy content (Ibid.). However energy engineers were aware that the notion of heat quality involved the notion of value – for example A. Thumann wrote, "The essential quality of heat is not the amount but rather its 'value'" (1984, p. 113) – which brings into play the question of teleology and wider, or ecological-scale goal functions. In an ecological context S.E. Jorgensen and G.Bendoricchio say that exergy is used as a goal function in ecological models, and expresses energy "with a built-in measure of quality like energy" (2001, p. 392).

There appear to be two main kinds of methodology used for the calculation of energy quality. These can be classed as either receiver or donor methods. One of the main differences that distinguishes these classes is the assumption of whether energy quality can be upgraded in an energy transformation process.

Receiver methods: view energy quality as a measure and indicator of the relative ease with which energy converts from one form to another. That is, how much energy is received from a transformation or transfer process. For example, A. Grubler [1] used two types of indicators of energetic quality pars pro toto: the hydrogen/carbon (H/C) ratio, and its inverse, the carbon intensity of energy. Grubler used the latter as an indicator of relative environmental quality. However Ohta says that in multistage industrial conversion systems, such as a hydrogen production system using solar energy, the energy quality is not upgraded (1994, p. 125).

Donor methods: view energy quality as a measure of the amount of energy used in an energy transformation, and that goes into sustaining a product or service (H.T.Odum 1975, p. 3). That is how much energy is donated to an energy transformation process. These methods are used in ecological physical chemistry, and ecosystem evaluation. From this view, in contrast with that outlined by Ohta, energy quality is upgraded in the multistage trophic conversions of ecological systems. Here, upgraded energy quality has a greater capacity to feedback and control lower grades of energy quality. Donor methods attempt to understand the usefulness of an energetic process by quantifying the extent to which higher quality energy controls lower quality energy.

Nomenclature: Prior to Ohta's definition above, A.W.Culp produced an energy conversion table describing the different conversions from one energy to another. Culp's treatment made use of a subscript to indicate which energy form is being talked about. Therefore, instead of writing "energy A", like Ohta above, Culp referred to "Je", to specify electrical form of energy, where" J" refers to "energy", and the "e"subscript refers to electrical form of energy. Culps notation anticipated Scienceman's (1997) later maxim that all energy should be specified as form energy with the appropriate subscript.

Ohta sought to order energy form conversions according to their quality and introduced a hierarchical scale for ranking energy quality based on the relative ease of energy conversion (see table to right after Ohta, p. 90). It is evident that Ohta did not analyse all forms of energy. For example, water is left out of his evaluation. It is important to note that the ranking of energy quality is not determined solely with reference to the efficiency of the energy conversion. This is to say that the evaluation of "relative ease" of an energy conversion is only partly dependent on transformation efficiency. As Ohta wrote, "the turbine generator and the electric motor have nearly the same efficiency, therefore we cannot say which has the higher quality" (1994, p. 90). Ohta therefore also included, 'abundance in nature' as another criterion for the determination energy quality rank. For example, Ohta said that, "the only electrical energy which exists in natural circumstances is lightning, while many mechanical energies exist." (Ibid.). (See also table 1. in Wall's article for another example ranking of energy quality).

Like Ohta, H.T.Odum also sought to order energy form conversions according to their quality, however his hierarchical scale for ranking was based on extending ecological system food chain concepts to thermodynamics rather than simply relative ease of transformation . For H.T.Odum energy quality rank is based on the amount of energy of one form required to generate a unit of another energy form. The ratio of one energy form input to a different energy form output was what H.T.Odum and colleagues called transformity: "the EMERGY per unit energy in units of emjoules per joule" (H.T.Odum 1988, p. 1135).

Retrieved from "https://en.everybodywiki.com/index.php?title=Energy_quality&oldid=1130702"
Categories:
Hidden category:
This page was last edited on 17 November 2020, at 22:11.
This page has been accessed 182 times.
Content is available under License CC BY-SA 3.0 unless otherwise noted.
Privacy policy
About EverybodyWiki Bios & Wiki
Disclaimers
Dark mode