Erodr (stylized erodr) is a college student-focused, online social networking service. It was available for iOS and Android. Erodr was a place where students could express themselves and get genuine feedback from each other.

The first prototypes were created in August 2012 by founder Drew Halliday while he was a student at the University of Missouri, and the app was launched on the App Store in November of the same year.[1][2] Drew got the idea when he was sitting in class watching students around him checking social media, surprisingly being not invested in the social opportunities available nearby. He thought that all the students inside of the classroom are inherently interested in each other, but there was no easy way for them to connect with each other.

The solution became erodr, a social media app that limits the viewable range and lifetime of posts. Drew and his father Andy launched the first prototype in August 2012. In November 2012 the app launched on the Apple App Store, and by January 2013 the app was gaining popularity rapidly.

By October 2013, erodr was open to users at 15 colleges. At the University of Missouri, where it had gained its biggest following, the app had 8,700 active users and 1 million app refreshes a week.[2] The company has not begun monetizing the service.[1][2]

A major update of erodr, developed by MLSDev, was launched in October 2016, introducing a complete redesign of the app and functional improvement.

As of February 2017, erodr is open to users at 1550 colleges. The most active erodr community is that of the University of Missouri.

Account creation is restricted to those with validated email addresses, and users can only log in from the erodr mobile app. Users can set up a profile and view posts by others in a feed from a selected geo range, with filters such as only posts made by one gender.[2] Profiles are not publicly searchable.[1]

Posts made to erodr are ephemeral, the length of time a post stays live on the stream depends on how many likes or dislikes it receives. A post without likes stays up only for several hours, or minutes if it is disliked or flagged by community users. Highly liked posts can be live for many days. Posts can also be made anonymously, and as an additional privacy feature, the poster can limit visibility of the post to users within a certain distance.[2][3] 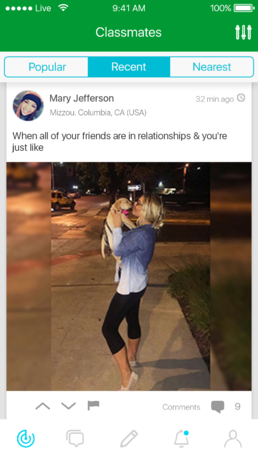 Users who post, like or comment, can be seen by other users, but if they don’t make a post with their profile, that profile is not visible or searchable by others. Originally however, despite claims of anonyminity, privacy was a strong issue with Erodr.

Campus brand representatives give away "Erodr gear" at the University of Missouri in May 2014.

The erodr team has chosen to concentrate on piloting the app at a small number of colleges through word of mouth, while continuing to develop the app. This has led to smaller scale adoption than other social networks, but gaining a cult following at some schools.[1]

On erodr, users post all kinds of content, but the prevailing number of posts can be classified as real-time observations, posts asking and giving advice, thoughts on relationships, group support, school life, sports and pets.

Rodies often get together in real life for various activities. In November 2016, official erodr Facebook page posted an update saying that the first couple who met each other on erodr got married. This event was greatly supported by the erodr community.

An article in The DePauw, the student newspaper of DePauw University, criticized the app for encouraging lewd behavior on campus saying, "The app, in theory, is really interesting. The concept of creating a social network just for the University to share is really cool. But the way it’s being used — and the way erodr is encouraging it be used — is distasteful."[4]

The erodr app is available for download and use is free of charge. The app does not display advertisements. There are no in-app purchases.

This article "Erodr" is from Wikipedia. The list of its authors can be seen in its historical and/or the page Edithistory:Erodr. Articles copied from Draft Namespace on Wikipedia could be seen on the Draft Namespace of Wikipedia and not main one.

Retrieved from "https://en.everybodywiki.com/index.php?title=Erodr&oldid=888023"
Categories:
This page was last edited on 23 July 2020, at 22:12.
This page has been accessed 275 times.
Content is available under License CC BY-SA 3.0 unless otherwise noted.
Privacy policy
About EverybodyWiki Bios & Wiki
Disclaimers
Mobile view