Mary Ann Evans, also known by her stage name Fearless Nadia (8 January 1908 – 9 January 1996) was an Indian actress and stuntwoman of Australian origin who is most remembered as the masked, cloaked adventurer in Hunterwali, released in 1935,[1][2][3] which was one of the earliest female-lead Indian films.[4]

Fearless Nadia was born as Mary Ann Evans on 8 January 1908 in Perth, Western Australia. She was the daughter of Scotsman Herbertt Evans, a volunteer in the British Army, and Margret. They lived in Australia, before coming to India. Mary was one year old when Herbertt's regiment was seconded to Bombay. Mary came to Bombay in 1913 at the age of five with her father.

In 1915, her father’s untimely death at the hands of Germans during World War I prompted the family’s move to Peshawar (now in Pakistan).[5] She learned horseback riding, hunting, fishing, and shooting during a stay in the North-West Frontier Province (now Khyber Pakhtunkhwa). In 1928, she returned to Bombay (Mumbai) with her mother and a son, Robert Jones, about whom not much is known, and then studied ballet under Madam Astrova.[1]

She had earlier tried her hand at a job in the Army & Navy Store in Bombay (Mumbai) as a salesgirl and had at one point wanted to learn "short-hand and typing to get a better job". Astrova’s troupe performed for British soldiers at military bases, for Indian royalty, and for other crowd in small towns and villages. She mastered the art of cartwheels and splits, which came in handy later during her film stunts. An Armenian fortune teller had foretold that a successful career lay ahead but she would have to choose a name starting with the letter ‘N’. She chose the name Nadia because it was "exotic-sounding".[5] 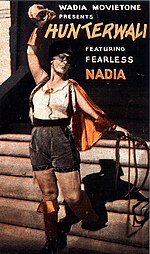 She toured India as a theatre artist and began working for Zarko Circus in 1930. She was introduced to Hindi films by Jamshed "J.B.H." Wadia who was the founder of Wadia Movietone, the behemoth of stunts and action in 1930s Bombay. At first, J.B.H. was bemused at Mary's insistence on trying out for the movies, but he took a gamble by giving her a cameo as a slave girl (in a hand-painted colour sequence that accentuated her blonde hair and sparkling blue eyes) in the film Desh Deepak, and then as Princess Parizaad in Noor-e-Yaman. Nadia proved a huge hit with the audience, whereupon, considering her skills at performing circus and other stunts, J.B.H., by then joined by his younger brother Homi, chose to develop her into a star.[5] In 1967-68, when she was in her late 50s, she appeared in a James Bond spoof called Khiladi (The Player).[6]

Nadia died on 9 January 1996, a day after her 88th birthday, due to age-related diseases.

In 1993, Nadia's great grandnephew, Riyad Vinci Wadia, made a documentary of her life and films, called Fearless: The Hunterwali Story. After watching the documentary at the 1993 Berlin International Film Festival, Dorothee Wenner, a German freelance writer, and film curator, wrote Fearless Nadia - The true story of Bollywood's original stunt queen, which was subsequently translated into English in 2005.[9] In Vishal Bharadwaj's Hindi film Rangoon, the role played by Kangana Ranaut was inspired by Nadia.[10]

On 8 January 2018, Google Displayed a doodle paying tribute to Fearless Nadia’s 110th Birthday. The artist commissioned for the doodle was the Indian artist Devaki Neogi.[11][12]

Retrieved from "https://en.everybodywiki.com/index.php?title=Fearless_Nadia&oldid=819920"
Categories:
Hidden categories:
This page was last edited on 19 June 2020, at 15:59.
This page has been accessed 139 times.
Content is available under License CC BY-SA 3.0 unless otherwise noted.
Privacy policy
About EverybodyWiki Bios & Wiki
Disclaimers
Mobile view