Flibe Energy was founded on April 6, 2011 by Kirk Sorensen, former NASA aerospace engineer and formerly chief nuclear technologist at Teledyne Brown Engineering, and Kirk Dorius, an intellectual property attorney and mechanical engineer. The name "Flibe" comes from FLiBe, a Fluoride salt of Lithium and Beryllium, used in LFTRs. Flibe Energy Incorporated is registered in the State of Delaware.[1] Their advertising slogan is "LFTR by Flibe Energy, powering the next thousand years"[2] Sorensen noted that "Fukushima marked the death of conventional light-water reactors".[3]

In a February 2011 interview with Kiki Sanford (two months prior to the founding of Flibe Energy) Sorensen estimated that the production cost of a LFTR (i.e. once research and development has finished), would be on the order of $1–2[4] per watt, making it competitive with the construction costs of natural gas plants.[5][unreliable source]

In addition, this reactor may require parts different from existing reactors, making them more expensive. 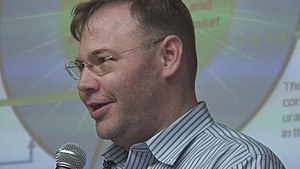 He has discussed the potential of thorium and LFTR technology for The Guardian's 2009 Manchester Report on climate change mitigation,[22] Wired (magazine)[23] and the TEDxYYC conference in 2011.[24]

Sorensen was written about in the book SuperFuel[25] and appears in the documentaries Thorium Remix 2011,[26][27] The Thorium Dream[28][29][30] as well as being credited in the upcoming "film about thorium" titled The Good Reactor.[31]

Retrieved from "https://en.everybodywiki.com/index.php?title=Flibe_Energy&oldid=331683"
Categories:
Hidden categories:
This page was last edited on 28 February 2019, at 02:38.
This page has been accessed 1,414 times.
Content is available under License CC BY-SA 3.0 unless otherwise noted.
Privacy policy
About EverybodyWiki Bios & Wiki
Disclaimers