The force theory or conquest theory is a theory of government which argues that governments are established by violence, rather than by divine right or through a social contract of their citizens. The defining feature of societal formation is considered to be conflict, such as one tribe conquering the others around it to take control in a certain region. According to McElroy, there exists more historical evidence for the conquest theory than for other competing theories.[1] 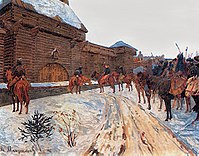 Throughout recorded history, governments have often expanded by use of force, either to gain land or to control resources. The force theory suggests that all governments function and gain their in through this way.

Retrieved from "https://en.everybodywiki.com/index.php?title=Force_theory&oldid=891408"
Categories:
Hidden category:
This page was last edited on 24 July 2020, at 19:56.
This page has been accessed 631 times.
Content is available under License CC BY-SA 3.0 unless otherwise noted.
Privacy policy
About EverybodyWiki Bios & Wiki
Disclaimers