Francesco Roda[1] (born November 22, 1985)[1] is an American professional wrestler and author better known by his ring name Frankie Arion. He is currently wrestling in the independent circuit in the Northeastern United States and Canada.

After being trained by Kevin Landry, Roda made his debut in 2003.

He debuted for MXW in 2006 at InterPromotional Incident, winning a battle royal. The following month at Golden Quest, Arion lost to Eddie Edwards in the primary stage of the first round of the MXW Championship Tournament. In 2006, Arion began competing for Defiant Pro Wrestling (DPW). On August 12, 2006, at This Thing of Ours, Arion challenged Kid Mikaze for the DPW Cruiserweight Championship, but was unsuccessful.[4] He challenged Mikaze for the championship again on April 29, 2007, at the Sunday, Bloody Sunday television taping, but was unsuccessful.[5] On June 23, 2007, Arion won the DPW Cruiserweight Championship by defeating Kid Mikaze.[1] He went on to successfully defend the championship against Mikey McFly, Cheech, and Mikaze in a Last Man Standing match.[6][7][8] On December 15, 2007 at the Dark Tidings event, Arion lost the championship to Mikaze in a three-way match, which also contained Nocturne.[9] Arion was stripped of the DPW Championship due to recurring scheduling conflicts, which prevented him from defencing the championship.[10]

In April and May 2007, Arion began wrestling for Northeast Wrestling and Big Time Wrestling, competing against wrestlers including Michael Sain and Antonio Thomas. On August 31, 2007, Arion teamed with Amber in a loss to Kid Mikaze and Lexxus in an intergender match. He went on to compete for promotions including Ultimate Ring Wars Wrestling, the Eastern Wrestling Alliance, NCW and Connecticut Wrestling Entertainment. Throughout 2008, Arion made several appearances for Squared Circle Wrestling (2CW) and Top Rope Promotions.[1]

In 2008, Arion was announced as one of the competitors for the ECWA Super 8 Tournament.[11] On September 19, 2008, Arion made his Ring of Honor debut, in a loss to "Dirty" Ernie Osiris in a dark match. He later appeared in dark matches prior to the Ring of Honor Wrestling television tapings on May 29 and 30, 2009.[1] 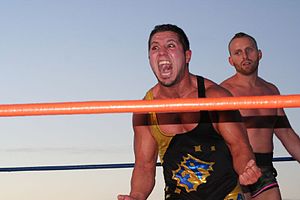 On May 15, 2004, Arion lost to Antonio "The Promise" Thomas in a match for the NECW Tag Team Championship.[12] On July 10, 2004, at United We Slam, Arion defeated Michael Sain to win the NECW Heavyweight Championship, becoming the sixth man to hold the championship.[13] On August 13, he successfully defended the NECW Heavyweight Championship against "The Alphamale" Justin Powers, but lost it to Sain on August 22.[14] On August 21, he defeated his storyline brother, Alex Arion.

In June 2005, he exchanged victories with Paul Lombardi, before going on to defeat Johnny Idol in July. On July 16, Arion teamed with Mike Bennett, Maverick Wild, and Pride to defeat his trainer, Kevin Landry, Sabotage, Paul Lombardi and Michael Sain in an elimination match.[1]

In late January 2006, Arion broke his ankle and fibula, and was forced to miss two months to rehabilitate the injury. He made his return in March, and won the NECW Television Championship on March 18, 2006, by defeating Johnny Idol.[1] Over the next several months, Arion successfully defended the championship against Billy Black, Scott Reed, and Kid Mikaze. He also successfully defeated Max Bauer, Mike Bennett, Alex Arion and Eddie Edwards in non-title matches, and was part of the winning team in a WarGames match on August 13, 2006.[1]

In late 2006, Arion was forced to leave NECW in storyline.[15] On June 30, 2007, Arion's storyline brother, Alex Arion, challenged TJ Richter to a singles match to allow Arion to return to NECW.[16] Richter declined, and instead proposed a gauntlet match in which Alex would have to defeat all three men or retire from wrestling, to which Alex agreed. On July 20, Alex won the gauntlet match, after defeating Scott Reed first, then Max Bauer via disqualification, and finally Richter to officially reinstate Arion.[17] At NECW's Birthday Bash 7: Caged Fury on August 18, Bauer and Richter lost to The Arion Brothers.[18]

Roda wrestles frequently for Bethany, Connecticut-based CTWE where he challenged for the CTWE Heavyweight Championship on two occasions. In September 2011, Frankie headlined versus former WWE and TNA wrestler Low-Ki, losing but receiving a handshake post match. In December 2011, Frankie challenged Vladimir Joseph for the number one contender spot, which he won, then he went on to defeat Dave Cole for the CTWE Heavyweight Championship on the same night.[19]

Arion is a lifelong fan of professional wrestling, and was inspired by Rey Mysterio, Jr. and Hacksaw Jim Duggan.[11] Arion trained regularly with Antonio Thomas.[11]

Arion as the NEPW World Heavyweight Champion in August 2007

Retrieved from "https://en.everybodywiki.com/index.php?title=Frankie_Arion&oldid=891841"
Categories:
Hidden categories:
This page was last edited on 24 July 2020, at 22:51.
This page has been accessed 1,832 times.
Content is available under License CC BY-SA 3.0 unless otherwise noted.
Privacy policy
About EverybodyWiki Bios & Wiki
Disclaimers