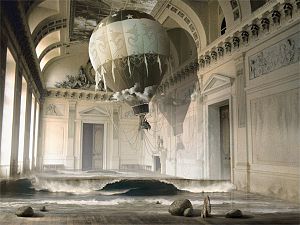 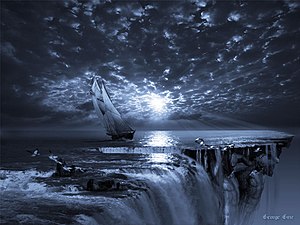 One of the first digital surrealism artists, Grie is known for numerous 3D, 2D, and matte painting images. Born in the USSR during the Soviet regime (aka Russian: Джордж Грие or Юрий Грибановский) he did not adopt the conventional and politically correct socialist realism art style.

The artist's digital neo-surrealistic artworks are an extraordinary visual record of his conceptual thoughts, philosophic views, fantasies, and dreams. Often journeying into the subconscious, Grie's photo-realistic artwork shows a magical, playful, and dream-like world laced with detail. Supernatural illusions, mystic romanticism, spiritual magic and gothic overtones are all intertwined in his virtual world. The end result on the viewer’s side is not always comfortable or conventional: there is a great deal of tension and alienation, yet not without an underlying tranquility, in the strange events taking place in the landscape of his imagination.[1]

George Grie had received a classical art education in various fine arts institutions before he started his career as a professional fine art painter and graphic artist. In the 1990s, Grie lived and worked in St. Petersburg where he had been an active member of the Pushkinskaya, 10 (art-center) and met many well-known artists and musicians such as Sergey Kuryokhin, Yuri Shevchuk, and Boris Grebenshchikov. His works presented in the State Russian Museum and in private collections in America, Finland, Canada, Russia, and UK.

Grie's artworks are full of strong and powerful images which rely on a visual impact. Use of a photo realistic technique giving a firm contrast between the light source and dark tonality, which can be seen in his early paintings, gives his artworks a graphical appearance. They are about capturing visual paradoxes: sometimes they would depict calm and contemplative moments, like solitude or melancholy. There is a stillness in his themes conveying a sense of inner-reflection and self-observation. Grie's admiration for photography is the reason why he has shifted his artistic preferences from traditional fine art towards computer digital art. His previous experience and classical painting education gave him a complete freedom of both self-expression and self-exploration as an artist. He became a professional multimedia graphic design artist and joined the IBM Corporation as a lead new-media specialist. George was working there together with renown North American illustrator Oleg Lipchenko and generative artist San Base. Today, his prime interest lies within contemporary 2D & 3D graphic design software, 3D models and their applications. In 2002 he initiated a creation of a popular digital art-related web portal – Interartcenter.net. The number of George Grie's artworks have been featured on BBC News.[2] His creations have been featured in many worlds' publications such as a Canadian high-school textbook "Art Works",[3] Illustrated History textbook (Denmark),[4] French school textbook,[5] and University of Washington magazine.[6] Artwork Dreamscape has been featured in Cognitive Science Journal, London University.[7]

The new form of digital art was born without pompous manifestations and noisy commercials. Some of us still consider digital and 3-dimensional art as something mechanical and artificial, something that is in some way out of human touch. This could not be more wrong. Computers don't make art, people do. Computers are merely creative tools – much sophisticated ones. Once you try them, you will never give up moving forward. There might be just one tiny annoying obstacle between you and your perfect design – lack of imagination.

George Grie's pictures have been used as cover art for more than 50 rock and classical music related projects.[17]

Share
Retrieved from "https://en.everybodywiki.com/index.php?title=George_Grie&oldid=894696"
Categories:
Hidden categories:
This page was last edited on 25 July 2020, at 21:21.
Content is available under License CC BY-SA 3.0 unless otherwise noted.
This page has been accessed 7,214 times.
Privacy policy
About EverybodyWiki Bios & Wiki
Disclaimers