Gilmour Racing is a privateer long-term car entrant in the Kumho Tyres Australian Formula 3 Championship. 2020 marks the 17th consecutive season of Formula 3 for the family owned and run team. In 2020, the team will compete in the Championship Class in a full season effort with their drivers Josh Buchan and Richard Peasey.[1]

Gilmour Developments formed in 2001 for driver Chris Gilmour, competing in the Queensland Formula Ford Championship before renaming as Gilmour Racing and entering the Australian Formula 3 Championship in 2004. The team had previously competed in various karting championships across Australia in the preceding 14 years, earning over 500 trophies.

Gilmour Developments competed in the 2001, 2002 and 2003 Queensland Formula Ford Championships. The team finished second in both 2001 and 2002 before finally claiming the 2003 Championship, with 7 wins. In total, the team claimed one championship and eleven race wins.

For 2004, Gilmour Racing bought an Opel "Baby" Spiess powered Dallara F301 in their efforts to win the Australian Formula 3 Championship. Competing in the outright class, the team picked up both Rookie of the Year and second in the Championship in a year that included 5 wins, 2 pole positions, 12 podiums and 235 points.

The 2005 season saw the introduction of the next generation of Formula 3 chassis to the Australian Formula 3 Championship. Gilmour Racing chose not to upgrade, competing with their existing chassis. Despite this, in 7 rounds and the Australian Grand Prix support races, the team claimed 12 podiums and 126 points. Chris Gilmour competed in Round 7 for Cooltemp Racing, amassing a total of 142 points and fourth outright for the season.

Gilmour Racing chose to upgrade to a Dallara F304-Opel Spiess for the 2006 season, a sister car to the Cooltemp Racing chassis Chris Gilmour had driven in 2005. While awaiting the delivery of their car, Gilmour Racing teamed with Cooltemp Racing to field Chris in Round 1. The new car arrived in time for the second round, and it debuted at Symmons Plains. Despite some early teething problems, the team amassed 4 podiums, 11 top fives and 137 points. Chris Gilmour in total scored 4th place and 150 points.

Due to a lack of funding, Gilmour Racing competed in only 3 championship rounds and the non-championship Australian Grand Prix support races. Despite this, the team achieved 4 top fives, 52 points and 8th place.

Gilmour won the Formula 3 title in 2011 after a season long duel with British driver James Winslow. Gilmour took six wins to Winslow's eight, but missing a round gave Gilmour enough of an advantage 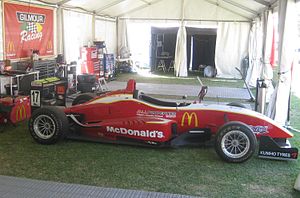 Retrieved from "https://en.everybodywiki.com/index.php?title=Gilmour_Racing&oldid=1067055"
Categories:
Hidden categories:
This page was last edited on 22 October 2020, at 01:20.
This page has been accessed 43 times.
Content is available under License CC BY-SA 3.0 unless otherwise noted.
Privacy policy
About EverybodyWiki Bios & Wiki
Disclaimers
Mobile view