Haryana Khadi and Village Industries Board

The Haryana Khadi and Village Industries Board (HKVIB), also knows by its hindi name Haryana Khadi Gramodhyog Nigam (HKGN), founded in 1969, is a cooperative society of the Indian state of Haryana for the promotion of traditional khadi handloom weavers and 23 other village industries such as pottery, leather, gur, khandsari, oil ghani, soap, carpentry, blacksmith, agarbatti, handmade paper, processing of pulses and cereals, etc. Traditional artisans are given financial assistance in the form of 50% subsidy grant and 50% loan for the purchase of tools and construction of workshop.

Haryana State Handloom and Handicraft Corporation was also set up in 1976 for the development, sales and marketing of handloom and handicraft products of Haryanvi artisans across India, and for this purpose it has Intensive Development Project at Bhiwani and 10 Collective Weaving Centres and 7 Carpet Training Centres at Panipat.[1][2][3][4][5]

Haryana is nationally well known for the wollen khadi.[6] All employees of HKGN wear khadi to work.[7] 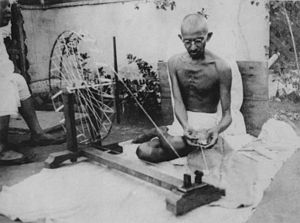 Khadi is a handwoven cloth.[8]. The freedom struggle revolved around the use of khādī fabrics and the dumping of foreign-made clothes.[9][10] The colonial British Raj was selling very high cost cloths to the Indians after buying raw cotton from India at cheap prices and then reselling the manufactured cloth to India. Consequently, Mahatma Gandhi started the Khadi movement to boycott foreign cloth,[11] to promote rural self-employment and self-reliance.[9][10][12][13][14] Thus Mahatma Gandhi started spinning himself and his followers and members of the Indian National Congress started to spin the cotton themselves. The chakri (spinning wheel) became the symbol of the Nationalist movement, which also came to be known as the khaddar or Khadi movement.[15]

After Haryana state was founded in 1966, the Haryana Khadi and Village Industries Board was established by the state government in 1969 to promote khadi and 23 other rural industries.[1][2][3]

Prime Minister, Narendra Modi, asserted that khadi cloth is a movement to help the poor.[6] He further highlighted that the Khadi and Village Industries Commission is a statutory organisation engaged in promoting and developing khadi and village industries.[6] He lauded that Haryana, Himachal Pradesh and Jammu and Kashmir are known for the woolen khadi.[6]

Chief Minister of Haryana, Manohar Lal Khattar, released state's textile policy in 2018 which is aimed at creation of 50,000 new jobs and promotion of textile industry as well as khadi by attracting the investment of ₹500,000 million (US$7.0 billion).[16] To promote khadi, the HKGN collaborates with the Maharshi Dayanand University to create awareness of khadi.[17] To walk the talk, all the employees of the Haryana Khadi and Village Industries Board come to work in attire made of khadi cloth.[7]

You have to Sign in or create an account to comment this article !
Retrieved from "https://en.everybodywiki.com/index.php?title=Haryana_Khadi_and_Village_Industries_Board&oldid=903731"
Categories:
Hidden categories:
This page was last edited on 30 July 2020, at 11:08.
This page has been accessed 1,107 times.
Content is available under License CC BY-SA 3.0 unless otherwise noted.
Privacy policy
About EverybodyWiki Bios & Wiki
Disclaimers
Mobile view