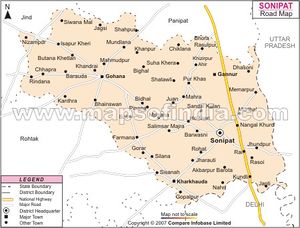 Sonipat (Hindi: सोनीपत) is city and district in Haryana. Its ancient name was Swarnaprastha (स्वर्णप्रस्थ).[1] Other smaller towns are Kharkhoda, Gohana, Ganaur, Murthal and Rai. The total area of Sonipat district is 2,260 sq km and its population is 10,64,000.

Sonipat is bordered by the states of Delhi and Uttar Pradesh as well as the districts of Rohtak, Jind and Panipat. The River Yamuna runs along the eastern boundary of the district. Sonipat is one of the important districts of Haryana. Sonipat town is the district headquarters. The district touches Delhi on one end, Panipat District on the other, and the Yamuna River acting as a border in one direction and Rohtak on the other side.

District Sonepat comprises of 3 sub-divisions namely Ganaur, Sonepat and Gohana and seven blocks (Ganaur, Sonipat, Rai, Kharkhauda, Gohana, Kathura and Mundlana) has been carved out of Rohtak and made a full fledged district on 22 December 1972. There are four tahsils. Sonepat is the largest tehsil followed by Gohana. Tahsils are:

(This list consists of villages falling under Sonipat tehsil, and not district Sonipat as a whole).

V. S. Agrawala[3] writes that Panini mentions village name in category ending Prastha - Shoṇā-prastha, modern Sonepat. To this Kasika adds:Suvarna-prastha. In Pali text Prastha denotes a place outside the grama, a waste land not used by men either for ploughing or sowing. It may be noted that places ending with the Prastha (Hindi=pat) are confined mostly to Kuru Country, such as Panipat, Sonipat, Baghpat, Tilpat etc. and to the region of Himalayas watered by Ganges.

In the South of Sonipat, if we cross Delhi, there is a city called Sona, and in the North of Sonipat, there is a city called Panipat. If we combine these names, it becomes Sonipat. Sonipat was earlier known as Sonprastha, which later on became Swarnprastha, meaning the "Golden City": derived from two Sanskrit words, Swarn (Gold) and Prastha (Place). Over a period of time, the classical name Swarnprasth's pronunciation degraded into Swarnpat, and then to its current form, Sonipat.

The earliest reference of this city comes in the epic Mahabharata, and at that time, it was one of the five villages demanded by the Pandavas in lieu of the kingdom of Hastinapur.

It was one of five villages demanded by Pandavas. Mahabharata tells that When Pandavas were defeated in chausar they were forced to leave the state for 13 years. During most of this time, they lived at place called Varnavata (modern Bairat) in Jaipur district in Rajasthan. Having lived there for pretty long time, the Pandawas sent a message to the Kauravas that they won't lay their claim to the throne if they were given just five villages. These 5 villages were :

If you study the population of people who lived in all these areas mentioned in Mahabharata it is is found to be the homeland of Jats.

Broadly speaking, the district is a continuous part of the Haryana-Punjab plain, but the area is not leveled in some parts. Over most of the district, the soil is fine loam of rich color. However, some areas has sandy soil and others are comprised of Kallar. The plain has a gradual slope to the south and east. The district may be roughly divided into three regions:

Along the River Yamuna is a narrow flood plain, 3 to 6 km wide, and is formed by the river along its course. The Khader plain is 20 to 30 ft. lower adjoining upland plain. It is comprised of fine clay loam left by the receding floods of the Yamuna. Presently, rice and sugar cane cultivation is undertaken by the farmers in the Khadar area. Recently, the farmers have started planting Banana, Pappaya and other fruits trees in this area.

It consists of Sonepat tehsil lying to the west of the Khadar, and is the most extensive of the three regions: The Upland Plain is covered with old alluvium , which if properly irrigated, is highly productive. Extensive Farming of crops, oil seeds, horticultural plants, vegetables and flowers, is undertaken in this region. The ridges in Gohana tehsil represent the northern most extension of the Aravallis.

A very smaller part of the district is covered with soil comprising of sand or sandy loam. Parts of this region has high PH value leading to kallor land.

Back to Places Haryana

Retrieved from "https://en.everybodywiki.com/index.php?title=Sonipat&oldid=469005"
Categories:
Hidden category:
This page was last edited on 30 May 2019, at 09:12.
This page has been accessed 399 times.
Content is available under License CC BY-SA 3.0 unless otherwise noted.
Privacy policy
About EverybodyWiki Bios & Wiki
Disclaimers
Mobile view