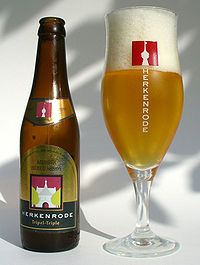 Herkenrode Tripel is a Belgian Abbey beer brewed for the Herkenrode Foundation by St. Joseph, a brewery in Opitter (Bree, Flanders in Belgium). It has been on the market since July 2009. It has an alcohol by volume of 7%. In June 2009 the Federation of Belgian Brewers awarded the beer the name and the logo of Recognized Belgian Abbey Beer. In the Herkenrode Abbey in Hasselt, which was founded in 1182, beer was brewed until the French Revolution in the brewery of the abbey.

On May 24, 2011, the beer won the golden award of the International Institute for Quality Selections "Monde Selection".

Share
Retrieved from "https://en.everybodywiki.com/index.php?title=Herkenrode_Tripel&oldid=660615"
Categories:
Hidden category:
This page was last edited on 7 April 2020, at 10:57.
Content is available under License CC BY-SA 3.0 unless otherwise noted.
This page has been accessed 269 times.
Privacy policy
About EverybodyWiki Bios & Wiki
Disclaimers