Hooghly district (/ˈhuːɡliː/) is one of the districts of the state of West Bengal in India. It can alternatively be spelt Hoogli or Hugli. The district is named after the Hooghly River.

The district of Hooghly derived its name from the town of Hooghly on the west bank of the Hooghly River about 40 km north of Kolkata. This town was a major river port for trade in India before colonialism.

The district has thousands of years of rich heritage as part of the Bengali kingdom of Bhurshut. The first European to reach this area was the Portuguese sailor Vasco da Gama. In 1536 Portuguese traders obtained a permit from Sultan Mahmud Shah to trade in this area. In those days the Hooghly River was the main route for transportation and Hooghly served as an excellent trading port.

Within a few decades the town of Hooghly turned into a major commercial centre and the largest port in Bengal. Later in 1579–80 Emperor Akbar gave permission to a Portuguese captain Pedro Tavares to establish a city anywhere in the Bengal province. They chose Hooghly, and it became the first European settlement in Bengal. In 1599 the Portuguese traders built a convent and a church in Bandel. This is the first Christian church in Bengal known as ‘Bandel Church’ today.

The Portuguese traders started slave trading, robbery and converting natives into Christians by pressure. At one point they stopped paying taxes to the Mughal Empire. As a result, Emperor Shah Jahan ordered the then-ruler of Bengal province, Qasim Khan Juvayni, to block the city of Hooghly. This led to a war in which the Portuguese were defeated.

Among other European powers that came to Hooghly were the Dutch, the Danish, the British, the French, the Belgians and the Germans. Dutch traders centred their activities in the town Chuchura which is south of Hooghly. Chandannagar became the base of the French and the city remained under their control from 1816 to 1950. Similarly, the Danish establishment in settlement in Serampore (1755). All these towns are on the west bank of the Hooghly River and served as ports. Among these European countries, the British ultimately became most powerful. 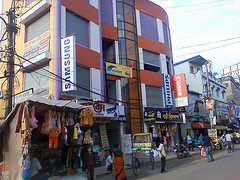 A village in Hooghly

Initially the British were based in and around the city of Hooghly like traders from other countries. In 1690 Job Charnock decided to shift the British trading centre from Hooghly-Chinsura to Calcutta. The reason behind this decision was the strategically safe location of Calcutta and its proximity to the Bay of Bengal. As a result, trade and commerce in the Bengal province shifted from the town of Hooghly to Calcutta. Hooghly lost its importance as Calcutta prospered.

After the Battle of Buxar this region was brought under direct British rule until India's independence in 1947. After independence, this district merged into the state of West Bengal.

The Taraknath temple, dedicated to the Hindu god Shiva worshiped as Taraknath, is a major pilgrimage spot in the town of Tarakeswar. Built in 1729, the temple is an ‘atchala’ structure of Bengal temple architecture with a ‘natmandir’ in front. Close by are the shrines of Kali and Lakshmi Narayan. Dudhpukur, a tank to the north of the Shiva temple is believed to fulfil the prayers of those taking a dip in it.

Pilgrims visit the temple throughout the year, especially on Mondays. Thousands of pilgrims visit Tarakeswar on the occasions of Shivaratri and ‘Gajan’, the former taking place in Phalgun (Feb-March) while the latter lasts for five days ending on the last day of Chaitra (mid-April). The month of Sravana (mid-July to mid-August) is seen to be auspicious for Shiva when celebrations are held on each Monday.

The district is flat, with no place having an elevation of more than 200 meters. The River Hooghly borders it to the east. Another major river is 'Damodar'.

Hooghly is one of the most economically developed districts in West Bengal. It is the main jute cultivation, jute industry, and jute trade hub in the state. The jute mills are along the banks of the river Hooghly in Tribeni, Bhadreswar, Champdani and Sreerampur.

There are a number of industrial complexes including one of the largest car manufacturing plants in India, the Hindustan Motors plant in Uttarpara.

Hugli-Chuchura is the district headquarters. There are 23 police stations, 18 development blocks, 12 municipalities and 210 gram panchayats in this district.[1][2]

Other than municipality area, each subdivision contains community development blocks that are divided into rural areas and census towns. There are 41 urban units: 12 municipalities and 32 census towns.[2][3]

The district is divided into 18 assembly constituencies:[4]

Impact of delimitation of constituencies[edit]

Hooghly District comes under Burdwan Police Range. The police chief of the district is the superintendent of police. His office is in Chinsurah.

The railway communication of the district, especially at the suburban area, is very developed.

There are four junction stations in Hooghly:

The railway is under Howrah Division. The Howrah – New Delhi Rajdhani Route passes through the district, which is one of the most important routes of the country. This route comes under Howrah division and is under the jurisdiction of Sr Den/2/Hwh assisted by AEN/2/LLH. The first train of ER started its journey from Howrah to Hooghly at 14 August 1854 (First halt was Bally (Howrah) and second halt was Serampore) . Hooghly station was announced as the heritage station. 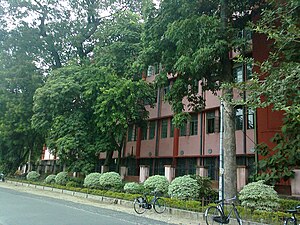 The most notable institutions among them are:

Retrieved from "https://en.everybodywiki.com/index.php?title=Hooghly_District&oldid=585725"
Category:
Hidden categories:
This page was last edited on 12 December 2019, at 11:38.
This page has been accessed 146 times.
Content is available under License CC BY-SA 3.0 unless otherwise noted.
Privacy policy
About EverybodyWiki Bios & Wiki
Disclaimers
Mobile view