A hotshot or hot-shot, also known as a badass or bad-ass,[citation needed] is a stock character featured in works of fiction who is known for initiating more actions, taking more risks, and suffering more pain than the other characters in the story.[citation needed] This type of character is usually present in action-driven tales in either a core protagonist or co-protagonist role, though many exceptions exist.[citation needed] What differentiates the badass and hotshot archetypes from the generalized concept of an action hero is that he or she generally works within the context of a group or team, and features traits that are contrasted with allies who act more cautiously.[citation needed] He or she is also not always the leader of the team. In some sense, the terms can be applied to a Byronic hero with a "loose cannon" or vice-driven nature.[citation needed]

American actor Tom Cruise, pictured in Paris in May 2014, is known for his roles as hotshot characters Ethan Hunt and Jack Reacher.[1][2]

A hotshot character can exist in a partnership or team where they play off other individuals, such as comic relief and love interest characters.[2][3] A character and their love interest may both display traits considered bad-ass in the same media, such as Dante and Trish in the Devil May Cry video game franchise.[4][5]

Although typically thought of as male, prominent female examples of a hotshot type have been shown in cinema, particularly Ellen Ripley and Private J. Vasquez in the 1986 film Aliens. The production was, in the words of Jewish Currents, "one of the earliest in which women warriors took center-stage," with actress Jenette Goldstein basing the Vasquez character on the strident Chicano subculture in the U.S. A 2009 MTV article remarked that Ripley "might just be cinema's greatest female action hero".[6][7]

Frequent characteristics of the hotshot character include some level of hubris, abrasive manners, aggressiveness, and a tendency to prefer to be or work alone. The latter trait may put the character at odds with a group, becoming a personality flaw.[citation needed] The individuals often feature notable vices such as alcoholism and constant cigarette smoking.[citation needed]

The character of Jack Reacher, devised by author Lee Child for a series of novels, provides a particular example. Film critic John Serba has described the hotshot individual as "a loner, a mysterious drifter who lives off the grid, a former... military policeman, an expert marksman and hand-to-hand combatant, [and] a man of murky morality". Serba additionally wrote that Reacher winds up "always a step ahead of everyone else" due to "powers of deduction, observation and foresight" that match "uncanny" abilities "with a righteous sense of justice". A film production that featured Tom Cruise as Reacher, directed by Christopher McQuarrie, came out in 2012.[1]

Sometimes, a whole group can be labeled as hotshots.[citation needed] For instance, critic Richard Roeper has said that the Impossible Missions Force (IMF) in the Mission Impossible film franchise is made up of "hotshot rogue types who don’t follow protocol," clashing with their superiors who "refuse to listen to logic and disregard the facts". Describing protagonist Ethan Hunt, also played by Tom Cruise, Roeper noted the character's abilities to outlast, outwit, and outgun multiple assailants, as well as show a mischievous personality, engaging in witty banter with adversaries.[2] An example from a different medium of a crew of hotshot characters working together are the spaceship pilots Captain Apollo, Lieutenant Boomer, and Lieutenant Starbuck from the 1978 television series Battlestar Galactica.[8]

Over multiple films, a hotshot character may display a growing hesitance to act as they once did. For example, actor Mel Gibson, who performed as the cop Martin Riggs in the Lethal Weapon film series, stated with reference to Lethal Weapon 4 that the character was noticeably slowing down as he got older. The "constantly joking" Riggs debuted in 1987 while the fourth and final movie came out in 1998.[3] 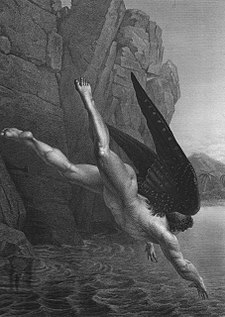 Byron and other literary commentators challenged views of characters such as Satan, pictured here in an illustration from John Milton's Paradise Lost, and they cited laudable characteristics held by these otherwise antagonistic figures.[9]

A precursor to the contemporary definition of the hotshot is the Byronic hero, named for writer Lord Byron and heavily associated with the Romantic movement. These characters are a particular kind of anti-hero defined by personal charisma, a thirst for rebellion, a sense of dark mystery, and a devil-may-care personality type. The intrigue behind these heroes has often attracted readers as a source of psychological fascination, even as the characters' often cruel actions have equally generated revulsion and fear.[9][10] The resulting body of literature featuring Byronic heroes provided the framework for the more fully defined stock character that emerged in contemporary culture and society over many decades.[citation needed]

In the modern age of film and literature, the hotshot archetype has become better-defined and more easily and intentionally embodied. The advent of mass media due to 21st century technologies brought significant changes to a great many stock characters in fiction.[citation needed] One of the earliest contemporary examples of someone deliberately cultivating that image is the work of Rudy Ray Moore, a former R&B artist, who developed a persona known as Dolemite.[citation needed]

Dolemite first appeared in recorded media on Moore's 1970 debut album Eat Out More Often, a humorous work praised by figures such as Cub Koda that started off his major career.[11][not in citation given] The strident, boasting figure quickly became synonymous with Moore, and his profanity-laden style influenced so many that he was called the "Godfather of Rap". Professor Bruce Jackson wrote in a 1974 evaluation of African-American oral traditions that Dolemite functioned as "the ultimate badass," suffering none of the "limited perspective" or "inarticulateness" of similar characters. A typical bragging remark from one of Moore's many stand-up routines is: "First thing Dolomite encountered was two big Rocky Mountains. He said, 'Mountains, what y'all gonna do?' They said, 'We gonna part, Mr. Dolemite, and let your badass through'."[12][13][14]

Retrieved from "https://en.everybodywiki.com/index.php?title=Hotshot_(stock_character)&oldid=905680"
Category:
Hidden categories:
This page was last edited on 31 July 2020, at 04:40.
This page has been accessed 817 times.
Content is available under License CC BY-SA 3.0 unless otherwise noted.
Privacy policy
About EverybodyWiki Bios & Wiki
Disclaimers