Illusion Infinity deals about successful Las Vegas-singer Patricia Paradise's yearning for a genuine soul-mate, and a home she calls 'Shangri-La’. Faith brings her to Death Valley, where she finds a harmonic family life – until 18 years later her teenage son's doubts about his father's identity shifts Patricia's reality once again up-side-down. 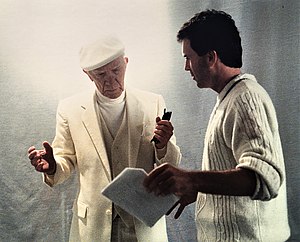 Ray Walston as Simon, shortly before his death, with director Roger Steinmann

Illusion Infinity was labeled as biopic; however, it's an original story and screenplay by Roger Steinmann he wrote 1997-2000 about the supposed real Las Vegas-singer Patricia Paradise.

In December 2000, principal photography started in Hollywood with newcomer Jolie Jackunas as Patricia; Edward Albert in the triple-role as Francis, Douglas and Henry; Ray Walston as Simon; and Eddie Albert as Henry Sr.

Illusion Infinity would have marked the first pairing of this Hollywood-legend with his actor-son Edward, if not the untimely death of 'Favorite Martian'-Ray Walston on Jan 1, 2001 would have put an immediate stop to the production.[4]

With the help of veteran casting director Gerald I. Wolff, a new cast was eventually assembled [5] Mickey Rooney replaced both Ray Walston and Eddie Albert as playing both characters Simon and Henry Sr., and Timothy Bottoms assumed the altered screenplay's quintuple-roles, including older Alan and young Patricia's father when filming resumed in November 2002.

Retrieved from "https://en.everybodywiki.com/index.php?title=Illusion_Infinity&oldid=1720808"
Category:
Hidden category:
This page was last edited on 15 May 2021, at 01:53.
This page has been accessed 60 times.
Content is available under License CC BY-SA 3.0 unless otherwise noted.
Privacy policy
About EverybodyWiki Bios & Wiki
Disclaimers