Inaamulhaq (born 14 November 1979) is an Indian actor and screenwriter[3] who has been part of several commercial and critically acclaimed Bollywood films, including Filmistaan,[4] Jolly LLB 2 and Airlift. After winning many accolades for his performances from the audience, jury and critics Inaamulhaq has bagged the Best Actor Award at the DCSAFF (Washington DC South Asian Film Festival) for outstanding performance in his latest film Nakkash.[5][6] and Best Actor Award at India International Film Festival of Boston (IIFFB) 2019.[7]

He has written for TV shows including Comedy Circus and dialogue for the Hindi film Bbuddah... Hoga Terra Baap.[8]

Born in Saharanpur (Uttar Pradesh, India), Inaamulhaq first appeared on stage at the age of twelve. Later, he joined the Indian People's Theatre Association (IPTA) in Saharanpur, and acted in numerous plays as a lead. In 2003, he graduated from the National School of Drama (NSD)[9] New Delhi, with specialization in acting.

In Mumbai he started his career as a writer for season 2 of Karamchand, directed by renowned Bollywood director Pankaj Parashar.

After working as a scriptwriter and creative consultant with Comedy Circus for two and a half years, he moved into films and wrote dialogue for Bbuddah... Hoga Terra Baap in 2011.

As an actor, he got his first film break with the critically acclaimed Firaaq in 2008. His first major role in a feature film was as the Pakistani national Aaftab, in Nitin Kakkar's National Award winner Filmistaan (2012),[10] for which he was named in the "Top 10 Stand-Out Actors of 2014" by Mid-Day,[11] and "The Most Prominent Debuts of 2014" by IBNlive.com[12] in their Year-ender 2014. He is also listed in IMDB'S Top 200 Best Indian Actors and Actresses.[13] Inaamulhaq appeared in the Askhay Kumar-starrer Airlift. He plays a very essential role of an Iraqi Major Kahalf Bin Zayd, who is the main antagonist of the evacuation that the film is based on. Airlift is one of the biggest success of the actor and his performance in Airlift received a grand reception from the audience and the critics as well. 'Airlift was released 22 January 2016.[14]

His cameo in Jolly LLB 2 caught the eyeballs of him as a Kashmiri. He also appeared in Lucknow Central and Firangi in essential role and was praised for his performance in both films.

Inaamulhaq's latest film Nakkash was released on limited screens on 31 may 2019, in which he played the lead role. The first look poster of Nakkash was unveiled at India Pavilion of the prestigious Cannes Film Festival 2018.[15][16]

Inaamulhaq received very positive reviews from critics for his performance in every film.

Madhureeta Mukherjee from Times of India wrote: "Inaamulhaq piques the emotions with perfection. The camaraderie between the pure souls who understand only the language of Bollywood is heart-warming".[34] Shubha Shetty-Saha from Mid-Day praised him saying: "But it is Inaamulhaq, who steals your heart with the most natural, endearing performance".[35] Taran Adarsh from Bollywood Hungama wrote: "Inaamulhaq too pitches in a fabulous performance, his performance and body language making you forget you're watching an actor emote".[36] Sneha May Francis from emirates247.com quotes: "Inaamulhaq lends exuberance to Aftaab, capturing his Bollywood dreams, unwavering loyalty and business acumen maturely".[37] Pratishtha Malhotra from Cine Blitz mentioned in her review: "One thing worth mentioning here is how this actor has worked on his detailing, from the dialect that he has maintained throughout the film to the body language. He floors you completely".[38] Paloma Sharma from Rediff.com wrote: "Inaamulhaq is as brilliant as Aftab, neither actor overshadows the other. They complement each other".[39] Rahul Desai from Mumbai Mirror wrote: "Inaamulhaq is uninhibited, and even when his character is saddled with sentiment, he makes you believe that he is a delusional filmmaker scripting his own climax".[40]

Praising Inaamulhaq"s performance in Airlift, critic Taran Adarsh stated in his tweet: "Inaamulhaq [Iraqi Major] and Prakash Belawade are terrific".[42] Joginder Tuteja from moviereviewpreview.com wrote: "The surprise of the film though is Inaamulhaq, who plays the Iraqi Major. He transforms himself completely from the Pakistani simpleton part that he played in Filmistaan".[43] Bollywood Hungama praised him in their review saying: "Inaamulhaq as the Amitabh Bachchan fan Iraqi Major Khalaf Bin Zayd is a delight".[44] Critic Komal Nahta from ETC Bollywood Business stated in his review: "Inaamulhaq is entertaining as the Iraqi major".[45] The newspaper The Indian Express wrote: "Inaamulhaq as Saddam's man-in-Kuwait, is suitably menacing".[46] Critic Rohit Sharma wrote on his blog: "Inaamul has nailed his character to perfection". Another film review website filmyinterval.com praised him stating: "One surprise package is Inaamulhaq. After his stint in Filmistaan, this talented actor gets a role that might turn around his career. His act of unhindered wickedness and the sadistic approach he portrays towards the Kuwaitis is applaud worthy".[47] Website pinkvilla.com also mention his performance stating "The film's supporting cast deserves a special mention, especially Inaamulhaq and Kumud Mishra, who were both great in their respective roles".[48] The Economic Times wrote: "And Inaamulhuq oozes smooth menace as the major".[49] Website Fansofcinema.com wrote: "Especially, Inaamulhaq playing the negative role as Major Khalaf Bin Zayd is best in the whole film".[50]

"Inaamulhaq is a show stealer"[58] mentioned Indiaglitz in their review of movie Phullu where Inaamulhaq did a cameo appearance. Devansh Sharma from firstpost.com wrote "A word here about Inaamulhaq, who has a cameo: the actor does an amazing job in the two scenes he has. These scenes also have the best writing in the film.".[59] thequint.com mentioned "Inaamulhaq of Airlift fame. His guest appearance lifts the story and cracks you up. In fact, it is this beggar that really spells out the entire premise of the film"[26] Sukanya Verma from Rediff.com praised Inaamulhaq quoting "No wonder a brief cameo by Inaamulhaq, once again reiterating his appeal in showy, idiosyncratic characters, makes more sense that most of this movie".[60] Team bollywoodbubble.com mentioned "Inaamulhaq's cameo is the best part of the film".[61] Ganesh Raheja from bollyworm.com wrote "The talented and versatile Inaamulhaq had a special appearance in the film, and for what little screen time he was given, we couldn't take our eyes off the man. We just wish that his character was given a little bit more of screen time and importance in the story. There is nothing more we could have asked for.".[62] Trijai Nerthi from rocheston.tv praised Inaamulhaq quoting "Inaamulhaq makes an unforgettable appearance in the film. His scenes are especially notable.".[63] Smrity Sharma from India.com wrote"The cameo from Inaamulhaq is one of the highlights of the film.".[64] Sreeju Sudhakaran from bollywoodlife.com wrote "Inaamulhaq (having a reunion of sorts with his Filmistaan co-star) has a hilarious cameo. In fact, this was the best scene of the movie."[65]

Shubra gupta from The prestigious Indian Express makes the headline "Watch it for Inaamulhaq" in her review of Nakkash. She further states "..And a lot of that has to do with the conviction the talented Inaamulhaq brings to his part, both as an artist whose devotion to his art is above all else, as well as a man of faith."[66] Pallabi Dey Purkayastha wrote in her The Times of India review "The protagonist, played by Inaamulhaq, is a revelation and his chemistry with his on-screen son almost evokes a sense of resentment towards the society we live in, mainly because of the unfair treatment that they are subjected to".[67] Saibal Chatterjee from NDTV quotes "Inaamulhaq does full justice to his first-ever lead role in a Hindi film, getting into the skin of the conflicted central character with complete conviction".[68] Anna MM Vetticad at Fist Post mentioned praising Inaamulhaq "On the shoulders of Inaamulhaq falls the role of the socially awkward, reticent Allah Miyan....He is an intriguing casting choice because he is not a conventional charmer who could invite empathy by his mere presence on screen – his likeability is derived entirely from the strength of his performances".[69] Troy Ribeiro at Sify.com wrote "Inaamulhaq is a brilliant actor, with his timid demeanour and nuanced performance, he slips into Allah Rakha's simpleton character with natural ease. You relate to him and your heart goes out to him at various stages of his life. He shares an excellent rapport with his co-stars. The chemistry between him and his son Mohammad or his friend Samad (Sharib Hashmi) in particular, are palpable".[70] ET Bureau at Economic Times quotes "Inaamulhaq gets into the skin of his character. He shares great chemistry with his on-screen son".[71] Suparna Sharma wrote at DECCAN CHRONICLE and THE ASIAN AGE in her review of Nakkash "Nakkash’s throbbing heart is Inaamulhaq.....But the disarming diffidence and quietness, along with an unshakeable belief in his value system that Inaamulhaq portrays is what lifts this otherwise stock, almost bechara character and makes him real, believable and a symbol of a species endangered".[72][73] Mubarak from The Lallan Top wrote in his Hindi language review "इनामुलहक़ बिलाशक इस फिल्म के कोहिनूर हैं. अल्लाह रक्खा जैसे उनकी रूह से चिपटा हुआ है. एक हुनरमंद आदमी, जो मज़हब को अपने ढंग से परिभाषित करता है. जिसके लिए दूसरा धर्म महज़ एक अलग रास्ते की तरह है, जो अंत-पंत एक ही ईश्वर तक पहुंचेगा. इनामुलहक़ इस किरदार की मासूमियत, उसका ग़म, गुस्सा, हताशा सब पूरे कन्विक्शन से व्यक्त कर पाते हैं. जब वो स्क्रीन पर होते हैं, उनसे नज़रें नहीं हटतीं"'.'[74]

Not only from the critics, Inaamulhaq received a huge response from the audience as well. Many meme Pictures parsing his characterization and speaking style have gone viral on various social networking sites.[75][76]

Inaamulhaq directed two short films – "The Search" (2005) which got nominated for the Best Film Award in competition category at Berlin Asia-Pacific Film Festival-2006 (Germany), and "Parchhaiyaan" (2004), based on an anti-War poem by renowned poet Sahir Ludhianvi.[85] 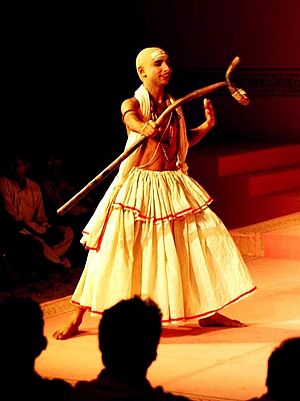 Inaamulhaq as Ivan Kaliayev in Albert Camus's The Just Assassins