Like the natural numbers, Z is closed under the operations of addition and multiplication, that is, the sum and product of any two integers is an integer. However, with the inclusion of the negative natural numbers, and, importantly, 0, Z (unlike the natural numbers) is also closed under subtraction. The integers form a unital ring which is the most basic one, in the following sense: for any unital ring, there is a unique ring homomorphism from the integers into this ring. This universal property, namely to be an initial object in the category of rings, characterizes the ring Z.

Z is not closed under division, since the quotient of two integers (e.g., 1 divided by 2), need not be an integer. Although the natural numbers are closed under exponentiation, the integers are not (since the result can be a fraction when the exponent is negative).

The following lists some of the basic properties of addition and multiplication for any integers a, b and c.

All the rules from the above property table, except for the last, taken together say that Z together with addition and multiplication is a commutative ring with unity. It is the prototype of all objects of such algebraic structure. Only those equalities of expressions are true in Z for all values of variables, which are true in any unital commutative ring. Note that certain non-zero integers map to zero in certain rings.

The lack of zero divisors in the integers (last property in the table) means that the commutative ring Z is an integral domain.

The lack of multiplicative inverses, which is equivalent to the fact that Z is not closed under division, means that Z is not a field. The smallest field containing the integers as a subring is the field of rational numbers. The process of constructing the rationals from the integers can be mimicked to form the field of fractions of any integral domain. And back, starting from an algebraic number field (an extension of rational numbers), its ring of integers can be extracted, which includes Z as its subring.

Although ordinary division is not defined on Z, the division "with remainder" is defined on them. It is called Euclidean division and possesses the following important property: that is, given two integers a and b with b ≠ 0, there exist unique integers q and r such that a = q × b + r and 0 ≤ r < | b |, where | b | denotes the absolute value of b. The integer q is called the quotient and r is called the remainder of the division of a by b. The Euclidean algorithm for computing greatest common divisors works by a sequence of Euclidean divisions.

Again, in the language of abstract algebra, the above says that Z is a Euclidean domain. This implies that Z is a principal ideal domain and any positive integer can be written as the products of primes in an essentially unique way.[8] This is the fundamental theorem of arithmetic.

The ordering of integers is compatible with the algebraic operations in the following way:

It follows that Z together with the above ordering is an ordered ring.

The integers are the only nontrivial totally ordered abelian group whose positive elements are well-ordered.[9] This is equivalent to the statement that any Noetherian valuation ring is either a field or a discrete valuation ring. 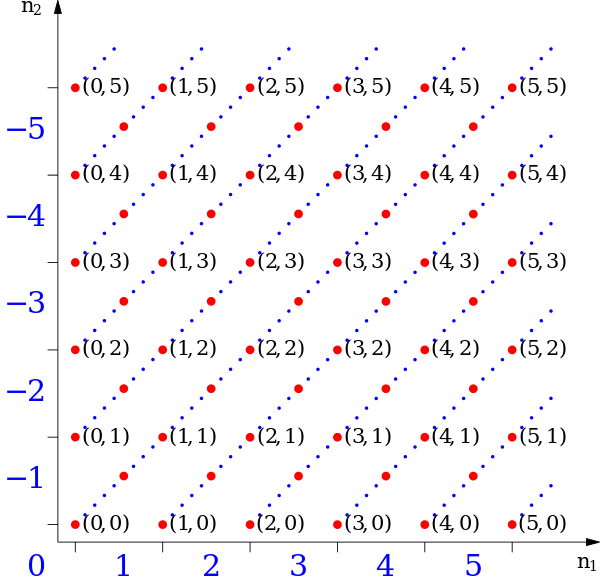 In elementary school teaching, integers are often intuitively defined as the (positive) natural numbers, zero, and the negations of the natural numbers. However, this style of definition leads to many different cases (each arithmetic operation needs to be defined on each combination of types of integer) and makes it tedious to prove that these operations obey the laws of arithmetic.[10] Therefore, in modern set-theoretic mathematics a more abstract construction,[11] which allows one to define the arithmetical operations without any case distinction, is often used instead.[12] The integers can thus be formally constructed as the equivalence classes of ordered pairs of natural numbers (a,b).[13]

The intuition is that (a,b) stands for the result of subtracting b from a.[13] To confirm our expectation that 1 − 2 and 4 − 5 denote the same number, we define an equivalence relation ~ on these pairs with the following rule:

Addition and multiplication of integers can be defined in terms of the equivalent operations on the natural numbers;[13] denoting by [(a,b)] the equivalence class having (a,b) as a member, one has:

The negation (or additive inverse) of an integer is obtained by reversing the order of the pair:

Hence subtraction can be defined as the addition of the additive inverse:

The standard ordering on the integers is given by:

It is easily verified that these definitions are independent of the choice of representatives of the equivalence classes.

If the natural numbers are identified with the corresponding integers (using the embedding mentioned above), this convention creates no ambiguity.

In theoretical computer science, other approaches for the construction of integers are used by automated theorem provers and term rewrite engines. Integers are represented as algebraic terms built using a few basic operations (such as zero, succ, pred, etc.) and, possibly, using natural numbers, which are assumed to be already constructed (e.g., using the Peano approach).

An integer is often a primitive data type in computer languages. However, integer data types can only represent a subset of all integers, since practical computers are of finite capacity. Also, in the common two's complement representation, the inherent definition of sign distinguishes between "negative" and "non-negative" rather than "negative, positive, and 0". (It is, however, certainly possible for a computer to determine whether an integer value is truly positive.) Fixed length integer approximation data types (or subsets) are denoted int or Integer in several programming languages (such as Algol68, C, Java, Delphi, etc.).

Variable-length representations of integers, such as bignums, can store any integer that fits in the computer's memory. Other integer data types are implemented with a fixed size, usually a number of bits which is a power of 2 (4, 8, 16, etc.) or a memorable number of decimal digits (e.g., 9 or 10).

The cardinality of the set of integers is equal to ℵ0 (aleph-null). This is readily demonstrated by the construction of a bijection, that is, a function that is injective and surjective from Z to N. If N = {0, 1, 2, …} then consider the function:

If the domain is restricted to Z then each and every member of Z has one and only one corresponding member of N and by the definition of cardinal equality the two sets have equal cardinality.

This article incorporates material from Integer on PlanetMath, which is licensed under the Creative Commons Attribution/Share-Alike License.

Retrieved from "https://en.everybodywiki.com/index.php?title=Integer&oldid=211506"
Categories:
Hidden categories:
This page was last edited on 8 November 2018, at 03:08.
This page has been accessed 2,008 times.
Content is available under License CC BY-SA 3.0 unless otherwise noted.
Privacy policy
About EverybodyWiki Bios & Wiki
Disclaimers