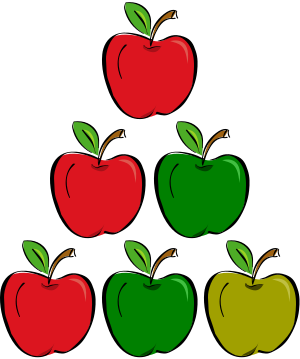 Natural numbers can be used for counting (one apple, two apples, three apples, …)

Properties of the natural numbers, such as divisibility and the distribution of prime numbers, are studied in number theory. Problems concerning counting and ordering, such as partitioning and enumerations, are studied in combinatorics.

In common language, for example in primary school, natural numbers may be called counting numbers[9] both to intuitively exclude the negative integers and zero, and also to contrast the discreteness of counting to the continuity of measurement, established by the real numbers.

The natural numbers can, at times, appear as a convenient set of names (labels), that is, as what linguists call nominal numbers, foregoing many or all of the properties of being a number in a mathematical sense. 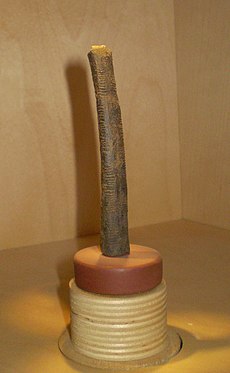 The Ishango bone (on exhibition at the Royal Belgian Institute of Natural Sciences)[10][11][12] is believed to have been used 20,000 years ago for natural number arithmetic.

The most primitive method of representing a natural number is to put down a mark for each object. Later, a set of objects could be tested for equality, excess or shortage, by striking out a mark and removing an object from the set.

The first major advance in abstraction was the use of numerals to represent numbers. This allowed systems to be developed for recording large numbers. The ancient Egyptians developed a powerful system of numerals with distinct hieroglyphs for 1, 10, and all the powers of 10 up to over 1 million. A stone carving from Karnak, dating from around 1500 BC and now at the Louvre in Paris, depicts 276 as 2 hundreds, 7 tens, and 6 ones; and similarly for the number 4,622. The Babylonians had a place-value system based essentially on the numerals for 1 and 10, using base sixty, so that the symbol for sixty was the same as the symbol for one, its value being determined from context.[13]

A much later advance was the development of the idea that 0 can be considered as a number, with its own numeral. The use of a 0 digit in place-value notation (within other numbers) dates back as early as 700 BC by the Babylonians, but they omitted such a digit when it would have been the last symbol in the number.[14] The Olmec and Maya civilizations used 0 as a separate number as early as the 1st century BC, but this usage did not spread beyond Mesoamerica.[15][16] The use of a numeral 0 in modern times originated with the Indian mathematician Brahmagupta in 628. However, 0 had been used as a number in the medieval computus (the calculation of the date of Easter), beginning with Dionysius Exiguus in 525, without being denoted by a numeral (standard Roman numerals do not have a symbol for 0); instead nulla (or the genitive form nullae) from nullus, the Latin word for "none", was employed to denote a 0 value.[17]

The first systematic study of numbers as abstractions is usually credited to the Greek philosophers Pythagoras and Archimedes. Some Greek mathematicians treated the number 1 differently than larger numbers, sometimes even not as a number at all.[18]

Independent studies also occurred at around the same time in India, China, and Mesoamerica.[19]

In 19th century Europe, there was mathematical and philosophical discussion about the exact nature of the natural numbers. A school[which?] of Naturalism stated that the natural numbers were a direct consequence of the human psyche. Henri Poincaré was one of its advocates, as was Leopold Kronecker who summarized "God made the integers, all else is the work of man".[20]

In opposition to the Naturalists, the constructivists saw a need to improve the logical rigor in the foundations of mathematics.[21] In the 1860s, Hermann Grassmann suggested a recursive definition for natural numbers thus stating they were not really natural but a consequence of definitions. Later, two classes of such formal definitions were constructed; later, they were shown to be equivalent in most practical applications.

Set-theoretical definitions of natural numbers were initiated by Frege and he initially defined a natural number as the class of all sets that are in one-to-one correspondence with a particular set, but this definition turned out to lead to paradoxes including Russell's paradox. Therefore, this formalism was modified so that a natural number is defined as a particular set, and any set that can be put into one-to-one correspondence with that set is said to have that number of elements.[22]

The second class of definitions was introduced by Charles Sanders Peirce, refined by Richard Dedekind, and further explored by Giuseppe Peano; this approach is now called Peano arithmetic. It is based on an axiomatization of the properties of ordinal numbers: each natural number has a successor and every non-zero natural number has a unique predecessor. Peano arithmetic is equiconsistent with several weak systems of set theory. One such system is ZFC with the axiom of infinity replaced by its negation. Theorems that can be proved in ZFC but cannot be proved using the Peano Axioms include Goodstein's theorem.[23]

With all these definitions it is convenient to include 0 (corresponding to the empty set) as a natural number. Including 0 is now the common convention among set theorists[24] and logicians.[25] Other mathematicians also include 0[5], e.g., Computer languages often start from zero when enumerating items like loop counters and string- or array-elements.[26][27] Many mathematicians have kept the older tradition and take 1 to be the first natural number.[28]

Since different properties are customarily associated to the tokens 0 and 1, e.g., neutral elements for addition and multiplications, respectively, it is important to know which version of natural numbers, generically denoted by '"`UNIQ--postMath-00000001-QINU`"' is employed in the case under consideration. This can be done by explanation in prose, by explicitly writing down the set, or by qualifying the generic identifier with a super- or subscript (see also in #Notation),[1][29] e.g., like this: 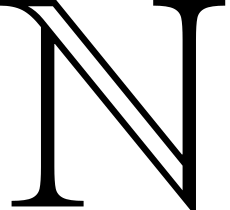 The double-struck capital N symbol, often used to denote the set of all natural numbers (see List of mathematical symbols).

Mathematicians use N or ℕ (an N in blackboard bold) to refer to the set of all natural numbers. Older texts have also occasionally employed J as the symbol for this set.[30]

Alternatively, since natural numbers naturally embed in the integers, they may be referred to as the positive, or the non-negative integers, respectively.[31]

One can recursively define an addition operator on the natural numbers by setting a + 0 = a and a + S(b) = S(a + b) for all a, b. Here S should be read as "successor". This turns the natural numbers (ℕ, +) into a commutative monoid with identity element 0, the so-called free object with one generator. This monoid satisfies the cancellation property and can be embedded in a group (in the mathematical sense of the word group). The smallest group containing the natural numbers is the integers.

Analogously, given that addition has been defined, a multiplication operator × can be defined via a × 0 = 0 and a × S(b) = (a × b) + a. This turns (ℕ*, ×) into a free commutative monoid with identity element 1; a generator set for this monoid is the set of prime numbers.

Relationship between addition and multiplication[edit]

Addition and multiplication are compatible, which is expressed in the distribution law: a × (b + c) = (a × b) + (a × c). These properties of addition and multiplication make the natural numbers an instance of a commutative semiring. Semirings are an algebraic generalization of the natural numbers where multiplication is not necessarily commutative. The lack of additive inverses, which is equivalent to the fact that ℕ is not closed under subtraction (i.e., subtracting one natural from another does not always result in another natural), means that ℕ is not a ring; instead it is a semiring (also known as a rig).

In this section, juxtaposed variables such as ab indicate the product a × b, and the standard order of operations is assumed.

A total order on the natural numbers is defined by letting a ≤ b if and only if there exists another natural number c where a + c = b. This order is compatible with the arithmetical operations in the following sense: if a, b and c are natural numbers and a ≤ b, then a + c ≤ b + c and ac ≤ bc.

In this section, juxtaposed variables such as ab indicate the product a × b, and the standard order of operations is assumed.

The number q is called the quotient and r is called the remainder of the division of a by b. The numbers q and r are uniquely determined by a and b. This Euclidean division is key to several other properties (divisibility), algorithms (such as the Euclidean algorithm), and ideas in number theory.

The addition (+) and multiplication (×) operations on natural numbers as defined above have several algebraic properties:

Many well-ordered sets with cardinal number ℵ0 have an ordinal number greater than ω (the latter is the lowest possible). The least ordinal of cardinality ℵ0 (i.e., the initial ordinal) is ω.

For finite well-ordered sets, there is a one-to-one correspondence between ordinal and cardinal numbers; therefore they can both be expressed by the same natural number, the number of elements of the set. This number can also be used to describe the position of an element in a larger finite, or an infinite, sequence.

A countable non-standard model of arithmetic satisfying the Peano Arithmetic (i.e., the first-order Peano axioms) was developed by Skolem in 1933. The hypernatural numbers are an uncountable model that can be constructed from the ordinary natural numbers via the ultrapower construction.

Georges Reeb used to claim provocatively that The naïve integers don't fill up ℕ. Other generalizations are discussed in the article on numbers.

Many properties of the natural numbers can be derived from the five Peano axioms:[33][34]

Constructions based on set theory[edit]

In the area of mathematics called set theory, a specific construction due to John von Neumann[35][36] defines the natural numbers as follows:

With this definition, a natural number n is a particular set with n elements, and n ≤ m if and only if n is a subset of m. The standard definition, now called definition of von Neumann ordinals, is: "each ordinal is the well-ordered set of all smaller ordinals."

Also, with this definition, different possible interpretations of notations like ℝn (n-tuples versus mappings of n into ℝ) coincide.

Even if one does not accept the axiom of infinity and therefore cannot accept that the set of all natural numbers exists, it is still possible to define any one of these sets.

Although the standard construction is useful, it is not the only possible construction. Ernst Zermelo's construction[36] goes as follows:

Retrieved from "https://en.everybodywiki.com/index.php?title=Natural_number&oldid=211505"
Categories:
Hidden categories:
This page was last edited on 8 November 2018, at 03:08.
This page has been accessed 3,748 times.
Content is available under License CC BY-SA 3.0 unless otherwise noted.
Privacy policy
About EverybodyWiki Bios & Wiki
Disclaimers