From EverybodyWiki Bios & Wiki
Jump to:navigation, search
This article is about the fictional place. For the Belgian folk metal band, see Ithilien (band).

In J. R. R. Tolkien's fictional Middle-earth, Ithilien is a region and fiefdom of the kingdom of Gondor.

Ithilien, or "Moon-land", is the easternmost province of Gondor, the only part of Gondor across the Great River Anduin. It lay between the river and Mordor's Mountains of Shadow (Ephel Dúath), and was subdivided by the stream of Morgulduin into North and South Ithilien.[1]

Ithilien was a fair and prosperous land during the Second Age and the first part of the Third Age, filled with many woods and gardens, when Gondor was strong and Mordor deserted. Of old its chief city was Minas Ithil, but when this was captured by Mordor in T.A. 2002 it was renamed Minas Morgul. After this the population gradually migrated across the Anduin to escape the looming threat of Ringwraiths from Minas Morgul.

During the Watchful Peace (which commenced in T.A. 2063) Ithilien was reoccupied by hardy folk, but in 2475 the Watchful Peace was broken when Uruks from Mordor devastated the province; and although they were driven back to the Morgul Vale by Boromir I, raids never entirely ceased after this time. Several centuries later attacks by Orcs and Haradrim intensified and in 2901 the raids grew so severe that the remainder of the population of Ithilien fled across the Anduin and Gondor withdrew from the province. However the Stewards of Gondor still kept scouts in Ithilien, based at secret locations such as Henneth Annûn, which were built shortly after 2901.[2][3] In 2954 Mount Doom burst into flame and those few farmers who remained fled Westward over the Anduin, leaving only the Rangers behind to harry the servants of Sauron. 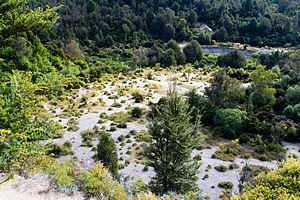 Twelve Mile Delta, Near Queenstown, New Zealand, the filming location of Faramir's rangers' battle with the Southrons in The Two Towers (film)

In the narrative of The Lord of the Rings, Gollum leads Frodo Baggins and Samwise Gamgee through Ithilien on the way to the pass of Cirith Ungol into Mordor. The land is described in the text as "a fair country of climbing woods and swift-falling streams", with gentle slopes, "shielded from the east by the Ephel Dúath and yet not under the mountain-shadow, protected from the north by the Emyn Muil, open to the southern airs and the moist winds from the Sea". It is also stated that "a wealth of sweet-smelling herbs and shrubs" and a vast array of tree species grew in Ithilien, some of them having been planted by men in days of peace, and that despite desolation the land "kept still a dishevelled dryad loveliness".[4] Samwise leaves a cooking fire burning, and as a result the hobbits are found and taken into custody by the Rangers of Ithilien, under the command of Faramir, the son of the Steward Denethor II. After witnessing a battle with Southrons (and an Oliphaunt) on the North Road, the hobbits are taken to Henneth Annûn by the Rangers, but are allowed to leave when Faramir is satisfied they are not agents of Sauron.

During the Fourth Age, the region was ruled by the Princes of Ithilien, a line that started with Faramir and Éowyn (the White Lady of Ithilien). Minas Ithil maybe repopulated after Faramir cleaned the evil-remnants in Morgul Vale, and Faramir ruled as Lord of Emyn Arnen. The Elves played a great role in the reconstruction of eastern Gondor. A colony was settled in Ithilien by the Elves of Mirkwood, welcomed there by Legolas, and "it became once again the fairest country in all the westlands",[5] until after some time all Elves had departed over the Sea.[6] The colony only lasted for about a century, because many Elves left for Valinor after Elessar's death in 120 F.A.[6]

Henneth Annûn was a hidden outpost of Gondor in North Ithilien, founded (like all of Gondor's hidden refuges in Ithilien) by the command of Steward Túrin II shortly after Ithilien was made desolate by the incursions of the Orcs of Mordor around T.A. 2901[7] and maintained as the longest-lasting of all the refuges of Ithilien.[2]

This secret refuge (the name means Window of the Sunset in Sindarin) consisted of a cave behind a west-facing waterfall overlooking a pool, the "Window-curtain", stated to have been the "fairest of the falls of Ithilien." The cave had been excavated by the stream feeding the waterfall, which originally fell from the hole in the cliff constituting the window in the name, but that stream had since been diverted by the men of Gondor to fall from doubled height, and the tunnel had been sealed, except for a concealed entrance along the brink of a deep pool beneath the waterfall.[8]

During the War of the Ring, Faramir son of Steward Denethor II had his base of operations there, and Frodo Baggins and his companion Samwise Gamgee were taken there by his company.

Emyn Arnen, a series of hills at the centre of Ithilien, south of Osgiliath, stood opposite Minas Tirith across Anduin; around it the river made a bend. Emyn Arnen means "Hills Beside the Water" in Sindarin, referring to its proximity to the Great River, Anduin.

From this place originated the line of later Stewards of Gondor. It was home to a family of Númenórean nobles, and from them came Húrin, chosen by King Minardil of Gondor as his Steward. Later kings of Gondor chose their stewards only from among Húrin's descendants, and eventually the Stewardship of Gondor became hereditary (the stewards called themselves members of the House of Húrin).

After the War of the Ring, the Lordship of the hills was granted to Faramir, Prince of Ithilien and Steward to the King Elessar. The element arnen in the name Tolkien explained[9] as of pre-Númenórean origin, while emyn in Sindarin means "hills".

The Flag Of Ithilien comprises two black and two white squares of equal size that have at the squares' center an image of a crescent moon which ties in with the meaning of Ithilien's name which when translated from the Sindarin means Land Of the Moon.

This article "Ithilien" is from Wikipedia. The list of its authors can be seen in its historical and/or the page Edithistory:Ithilien. Articles copied from Draft Namespace on Wikipedia could be seen on the Draft Namespace of Wikipedia and not main one.

Share
Retrieved from "https://en.everybodywiki.com/index.php?title=Ithilien&oldid=908948"
Categories:
Hidden categories:
This page was last edited on 31 July 2020, at 17:32.
Content is available under License CC BY-SA 3.0 unless otherwise noted.
This page has been accessed 1,767 times.
Privacy policy
About EverybodyWiki Bios & Wiki
Disclaimers