In the fiction of J. R. R. Tolkien, Eregion (/ˌɛrɪˈɡiːən/)[1] or Hollin was a realm of the Noldorin Elves in eastern Eriador during the Second Age, located near the West Gate of Moria under the shadow of the Hithaeglir (Misty Mountains). Its capital was Ost-in-Edhil (literally Town of the Elves). This city was established by the Noldor in the year 750 of the Second Age, located where the Sirannon met the Glanduin. The elves built a highway, the Elven-way, to connect Ost-in-Edhil to the West Gate of Moria. It was famous for its holly trees, hence the name in both (translated) Westron and Sindarin (ereg 'holly tree', from root ERÉK- 'thorn', also yielding Quenya erka, 'prickle, spine', according to the Etymologies in The Lost Road and Other Writings). 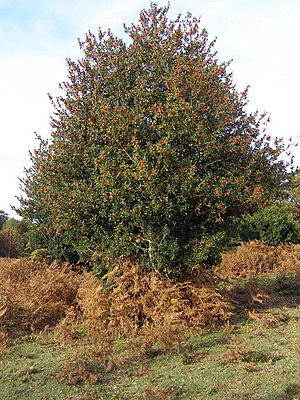 Eregion was populated by Noldor, and for a while ruled by Galadriel and Celeborn, until they left for Lothlórien on the other side of the Misty Mountains. The Elves of Eregion lived in harmony with a Dwarf civilization, namely the kingdom of Khazad-dûm, or Hadhodrond in the Elven tongue. There was great trade between the two realms, facilitated by the Elven-way.

After Galadriel and Celeborn had left, Eregion was ruled by Celebrimbor, grandson of Fëanor. Under his rule the Elves of Eregion became friends with Annatar, Lord of Gifts, and created the Rings of Power. When Annatar was revealed as the Dark Lord Sauron, the Elves of Eregion tried to keep the Rings from falling into Sauron's hands. Outraged, Sauron invaded Eregion in SA 1695 with a large force, and two years later it was utterly destroyed and many of its people, including Celebrimbor, killed. Sauron took most of the rings for himself, but the Elves managed to rescue Vilya, Narya, and Nenya, (the Three Rings of the Elves). After Eregion's destruction its survivors fled to Lindon, Lothlórien, and the refuge of Imladris (Rivendell).

In the Third Age, Eregion was a pleasant but unpopulated land, and contained many ruins of the Elven civilization that once thrived there.

On their way to the Redhorn Gate the Company of the Ring travelled through Hollin. By day they had to hide from flocks of Crebain (crows spying for Saruman). After being turned back by Caradhras they were attacked that night by a host of Wargs. Their defeat by the mountain, the spying crows during the day and wild wolves by night sealed the Fellowship's decision to journey through Moria.

Eregion was added alongside Moria and Lothlórien to The Lord of the Rings Online as an in-game region for the 2008 Mines of Moria expansion pack. In this expansion, Eregion is depicted as a rugged landscape of holly trees and grasslands that is being explored by Dunlendings sent by Isengard looking for remnants of lost ring-lore, as well as men out of Angmar. The landscape is dotted with several Elven ruins from the Second Age, some of which are hubs where the player can receive quests from Elves sent from Rivendell. Several important Epic story-line quests take place in Eregion from Volumes I, II, and III.

Eregion is also depicted in the non-canonical 2004 video game The Lord of the Rings: The Third Age. In that game, Eregion is the first area of the game. This version of Eregion also includes elven ruins and borders Moria.

This article "Eregion" is from Wikipedia. The list of its authors can be seen in its historical and/or the page Edithistory:Eregion. Articles copied from Draft Namespace on Wikipedia could be seen on the Draft Namespace of Wikipedia and not main one.

Share
Retrieved from "https://en.everybodywiki.com/index.php?title=Eregion&oldid=887702"
Category:
Hidden categories:
This page was last edited on 23 July 2020, at 18:26.
Content is available under License CC BY-SA 3.0 unless otherwise noted.
This page has been accessed 3,176 times.
Privacy policy
About EverybodyWiki Bios & Wiki
Disclaimers