Lindon is the land beyond the Ered Luin, the Blue Mountains, in the northwest of Middle-earth in the fictional universe of J. R. R. Tolkien. It is the westernmost land of the continent. The Gulf of Lune divides it into Forlindon (North Lindon) and Harlindon (South Lindon). Mithlond or the Grey Havens stood near the mouth of the River Lhûn at the gulf's eastern end.

Lindon serves as a narrative plot device, the final point of transition from the mortal changing world of Middle-earth to the unchanged Arda of the past.

Ossiriand (the 'Land of Seven Rivers'; cf. Q. otso, T. otos, S. odog, all meaning "seven") was the most eastern region of Beleriand during the First Age, lying between the Ered Luin (Blue Mountains) and the river Gelion. Ossiriand was a green and forested land; Treebeard had fond memories of his summer visits to its elm-woods. 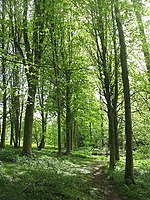 Elm woods in Herefordshire, England. The English countryside provided much of the inspiration for Tolkien's works

The Seven Rivers were, from north to south:

Along the northern side of the Ascar ran the Dwarf-road to Nogrod. North of Ossiriand lay the land of Thargelion, ruled by Caranthir son of Fëanor. The island Tol Galen in Ossiriand's southernmost river, the Adurant, was named the Land of the Dead that Live when Lúthien and Beren lived their second lives there.

The first settlers of Beleriand were the Sindarin Elves, but they did not venture into Ossiriand except as "wandering hunters". Ossiriand continued to remain unoccupied for many centuries, a situation not disturbed when Dwarves appeared, and built their road along the northern boundary.

Eventually another Elven people, the Nandor, entered Ossiriand under their leader Denethor. The Nandor (who were Teleri and thus kin of the Sindar) were given permission by Thingol to settle the lands. There they lived in "long years of peace", until Denethor was killed in an Orc-raid. They chose no more leaders, and many of them removed to Thingol's kingdom of Doriath. The Nandor remaining in Ossiriand withdrew into its woods, and became known as the Laiquendi, or Green Elves.[1] The Laiquendi were prodigious singers; when the High-elven Noldor first arrived in Ossiriand, they were so impressed that they gave the land a new name: Lindon, the land of music.[2]

At the drowning of Beleriand in the War of Wrath, only parts of Ossiriand and Thargelion survived, along with what became the islands of Tol Fuin and Himring.[3] Belegaer the Great Sea broke through the Blue Mountains on the eastern boundary of Beleriand to create the Gulf of Lhûn. The War of Wrath ended the First Age, and thereafter the name Lindon was applied to the surviving parts of Ossiriand and Thargelion. This new Elven realm was ruled by King Gil-galad until his death in S.A. 3441, and subsequently by the lord Círdan.

Second Age: the Kingdom of Lindon[edit]

Many of the Elves of Beleriand relocated to Lindon at the beginning of the Second Age, where they were ruled by King Gil-galad. The Noldor mainly dwelt in the northern section of Forlindon, while the Sindar and surviving Laiquendi were in the southern section of Harlindon.[4] Together they built Mithlond, the Grey Havens, on the eastern end of the Gulf of Lhûn along the banks of the River Lhûn in its deep firth; and many Elves sailed from there to Valinor.[5] Círdan the Shipwright was the master of the Havens since its founding; Galdor of the Havens, his messenger, was among Mithlond's known inhabitants. The general map of Middle-earth in The Lord of the Rings shows other anchorages farther west in the Gulf of Lhûn: Harlond ("south-haven") and Forlond ("north-haven") on the southern and northern shores, respectively.

Lindon was one of the two Noldorin realms during the Second Age, the other being Eregion, or Hollin. Because of its cultural and spiritual importance to the Elves, Mithlond in time became the primary Elvish settlement west of the Misty Mountains prior to the establishment of Eregion and, later, of Imladris. Even after the death of Gil-galad, as the Elves dwindled in numbers by the year, Mithlond remained a focal point of the history of the northern part of Middle-earth.

During the War of the Elves and Sauron, the Dark Lord Sauron attempted to invade and conquer the Havens in order to gain the Three Elven Rings[6] but was halted and defeated at the Lhûn by Gil-galad with the timely arrival of the great Númenórean armament of Tar-Minastir[7] (S.A. 1700).

The Second Age ended with the Last Alliance of Elves and Men. The Last Alliance was the final great military effort of the Elves and they raised their largest army since the First Age for the war. Gil-galad was killed by Sauron during the last battle of the war (S.A. 3441). The Elves of Lindon suffered severe losses in the war and afterwards most of the surviving Noldor departed for Valinor and much of Lindon became depopulated.

Third Age and the Passing of the Elves[edit]

In the Third Age Lindon was ruled by Gil-galad's ally, the Sindarin elf Círdan the Shipwright, master of Mithlond. Círdan ruled as a "lord" and never with Gil-galad's title "king". Círdan's main task was to build ships for the Elves departing Middle-earth to sail to the West.

By the end of the Third Age, the majority of Lindon's population resided in or around the harbour of the Grey Havens, while the rest settled along the shores of the Gulf of Lhûn. Lindon was one of the few populated areas of northwestern Middle-earth that remained untouched by the War of the Ring. Sauron never achieved the strength and reach he had in the Second Age and he was unable to make a direct assault, even though the realm was a strategically important location populated by his enemies.

During the Fourth Age, it was one of the last Elven havens as the remaining Elves of Rivendell and Lothlórien left Middle-earth. In the beginning of the first century, Fourth Age, it experienced a population growth as migrants from the east came to Mithlond. Not all Elves left Middle-earth immediately; many of the migrants made long-term temporary settlements.

Aside from Elves, Gandalf, Bilbo Baggins and Frodo Baggins also went to Valinor from the Grey Havens in the Ringbearers' ship. A family tradition held that Samwise Gamgee, having been himself a Ring-bearer, albeit briefly, likewise boarded a ship in the Grey Havens, in the year 1482 of the Shire Reckoning, Fourth Age 61.

Círdan stayed in Mithlond into the Fourth Age until as he said, "the last ship sails" and the remaining Eldar passed into the West. A small Elven community may have remained for quite some time. It is unclear just what the fate of the Elves of Middle-earth was in the early Fourth Age or how long Círdan and his remaining folk dwelled at the Havens and continued to build the great ships that carried the Elves to the Undying Lands.