Rock house on Goodwill at Marshall streets in Minden once owned by Jack Batton; prior to the construction of the house, the lot was used for grazing cattle owned by Batton and his friend, Delna "Cowboy" Drake.

Controversial at the time of their construction, the Webster Manor Apartments were completed after Jack Batton, their principal sponsor, had left the office of mayor of Minden. 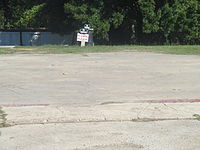 This razed lot on Martin Luther King Drive in Minden once housed the Jack Batton Grocery. 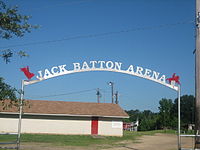 Inside the Jack Batton Arena

The Batton/Shurtleff family grave marker in the historic Minden Cemetery

A Minden native, Batton was the son of James Bryant Batton (1880-1939) and Nolie K. Batton (1881-1971). The senior Batton, formerly of Dubberly in south Webster Parish, was a former Webster Parish chief deputy sheriff, a two-term Minden police chief,[1] and an unsuccessful candidate for sheriff in a special election held in 1933 after a devastating tornado struck the city.

The Battons resided in a house made of brown rock at the intersection of Goodwill and Marshall streets in Minden. The house is across the street from the boyhood home of the singer David Houston. The football star David Lee of the former Baltimore Colts grew up in the same neighborhood block.

At the time of his death, Batton was divorced from the former Louise Zeagler Jones (1916-2004),[5] the widow of retired United States Army police officer and Lieutenant Colonel Rosamond Roy Jones (1912-1980) of Natchitochnes and later Minden. A native of Caldwell Parish, Louise Jones Batton was heavily involved in the American Legion auxiliary and in various veterans causes. In 1993, she was named "Woman of the Year" in Minden.[6] Rosamond and Louise Jones had three children, Doris Jones Copeland, Rosamond Anne Gaston, and Phillip Lee Jones (born 1947). Rosamond and Louise Jones are interred at Gardens of Memory Cemetery in Minden.[5]

A Democrat, Batton served on the Minden City Council in the former position of streets and parks commissioner from 1946–1962 and from 1966–1978. He was defeated in the at-large city council races held on May 12, 1962, as were all sitting council members.[7][8] The dry cleaners businessman J. Travis Taylor (1914–1995) became the new streets and park commissioner for a single term.[9] Batton was a brother of J. D. Batton, the former Minden police chief and then from 1952 to 1964, the Webster Parish sheriff. In 1948, J. D. Batton lost a race for Webster Parish clerk of court to the incumbent Thomas J. Campbell (1895–1968), a native of Castor in Bienville Parish.[1] Jack Batton's brother-in-law, Arthur Howard Shurtleff (1920–1985), was a member of the Webster Parish Police Jury, the parish governing body akin to the county commission in most other states.

In his first term as streets and parks commissioner in 1946, Batton and then newly mayor, John T. David, moved forward a plan to blacktop eight miles of Minden municipal streets, beginning with a short link of Bayou Avenue from Pine Street west to the Minden Cemetery.[10] At the time, most city streets were unpaved, and the city had used mule-drawn equipment. Batton was the city council president at the time of his defeat in 1962. He stressed street paving, curbing and guttering, and improvements to parks in his unsuccessful reelection bid.[11]

After a four-year hiatus, Batton returned to the council in 1966, when Mayor Frank Norman was unseated by the Republican Tom Colten and streets and parks commissioner Travis Taylor did not run for reelection. Batton won his last term as streets and parks commissioner in 1974, when he defeated two intraparty opponents, Emily Doss and the businessman William J. Rabon (1922–1991), who had owned the former Star Furniture Company on the Shreveport Road in Minden.

In 1977, as a council member, Batton abstained on a proposal to increase the salary of the mayor from $16,000 to $19,000 annually, effective January 1979. City employees were given an 8 percent pay increase.[12] Ironically, Batton benefited from the higher mayoral pay, as he assumed the office on January 1, 1979.

In 1978, Batton ran for mayor, when the one-term incumbent J.E. "Pat" Patterson opted to run instead for a vacancy in the Louisiana House of Representatives. During the campaign, Judge Benjamin C. Dawkins, Jr., of the United States District Court for the Western District of Louisiana ordered the city commission government abolished and replaced by the mayor-council format, with five single-member council districts.[13] Batton won the post by an 88-vote margin in the nonpartisan blanket primary held on September 16, 1978. He defeated his fellow Democrat, the late Orris R. Long, former president of the Minden Chamber of Commerce.[14] Batton polled 2,633 votes (50.8 percent) to Long’s 2,545 (49.2 percent).[15]

Judge Dawkins ordered the mayor-council government in response to a civil suit filed by the NAACP, which sought the establishment of at least two black majority districts.[13] In the same primary in which Batton defeated Long, Robert T. Tobin, a retired educator, became the first African American elected to the council; he defeated fellow African-American Democrat J. D. Hampton, Jr. (1935-2015), 519 votes (69.8 percent) to 225 (30.2 percent). On November 7, 1978, Peggy J. Staples (1933–2009) became the first woman ever elected to the city council. She defeated fellow Democrat Ben Kinel, 733 (67 percent) to 359 (33 percent). And Republican Felix R. Garrett (1922-1987), formerly the public utilities commissioner and a professor at the University of Louisiana at Monroe who had vacillated over seeking another term on the council, became the first member of his party to fill a single-member district seat on the council.[16][17] Batton did not seek reelection in 1982, when the educator, Noel "Gene" Byars, won the mayoral position.

As mayor, Batton advocated continued municipal ownership of the light and power plant, first procured by the city during the 1958–1966 administration of Mayor Frank Norman. Batton worked to expand low-income housing and continued street paving.

In the spring of 1981, Minden resident Joe Holemon launched an unsuccessful recall petition against Batton over the proposed construction of a low-income housing complex, Webster Manor Apartments, adjacent to the Pecan View neighborhood between Shirley Drive and the Lewisville Road. The project contractor was Jamar Adcock of Monroe, a former member of the Louisiana State Senate who ran unsuccessfully in 1971 for lieutenant governor.[18]

Holeman sought to recall Batton on the grounds that the mayor did not inform the city council on April 7, 1980 that it had thirty days thereafter to consider objections to the apartments and that his failure to have done so implicitly meant the approval of the project. Holeman also accused Batton of having needlessly delayed the 1980-1981 city budget by more than six months.[19]

When the city council voted 3-2 to rescind Adcock's building permit, Batton vetoed the measure on grounds that the project was needed and that the city would otherwise be sued for breach of contract if it halted construction of the apartments.[20] Batton's veto was tested in a ruling from Attorney General William J. Guste, who declared that the mayor could veto a 3-2 or 4-1 council vote but not a unanimous one.[21]

Batton said that he had no actual knowledge of any objections to the apartments until the recall attempt was launched. He also voiced a lack of concern about the recall effort, which failed to garner the needed 2,468 signature to bring forth a special election.[22][23]

After two lawsuits and months of delays,[24] the council worked with Adcock to allow construction of the Webster Manor Apartments at two other sites, rather than in the Pecan View subdivision. Thirty-one apartments were built at the intersection of Bayou Avenue and Miller Street, and fifty-five others followed further west at the intersection of Bayou Avenue and Weston Street near the Town and Country Nursing Home. There were questions about acceptable sewerage facilities, but Batton said the needed services were adequate at both sites.[25]

Batton announced in March 1982 that he would not seek reelection to a second term because he intended to join his son, Jimmy Batton, in expanding their planting of wheat and cotton crops. He noted in the decision not to run that he had never missed a city council meeting in thirty-two years in municipal government.[26]

However, Batton returned to the political fray in 1986 in a bid to oust his successor, Noel Byars, who was recalled from the position in 1989 on a matter of questional personal finances. Batton used the slogan, "Get an Old Pro Off the Bench." Byars listed his own accomplishments from 1982 to 1986 as $830,000 in street improvements, $9 million in new industry, and three hundred new jobs. Byars prevailed, 2,603 votes (53.6 percent) to Batton's 2,252 (46.4 percent). It was Batton's last political race.[27]

From 1936 until his retirement in 1991, Batton operated the former Batton's Grocery on Maiden Lane (since Martin Luther King, Jr., Drive) in an African-American section of the city.[28] Four months after Batton's reelection in 1950 to the city council in the role of streets and parks commissioner,[29] the store burned at an estimated loss of $22,000, partly insured. Fire Chief John T. David determined that the blaze was caused by a faulty electric motor in the meat market of the store.[30] Batton's Grocery was soon rebuilt.

A cattleman, Batton owned the Minden Auction Barn and provided at no cost the arena used by the Minden Riding Club. He also raised horses.[4] The facility was subsequently renamed the Jack Batton Arena.[31] In 1950, he was named the second president of the new Webster Parish Cattleman's Association.[32]

Active with Batton in the riding club was his friend and fellow cattleman, Delna Russell "Cowboy" Drake (1905–1976).[33]

In 1949, Batton became a director of Hunter's Playground and Playhouse, located near Batton's home on Goodwill Street. The complex was opened for the entertainment of young people in the city by Larry B. Hunter (1896–1971) and his wife, Gladys Powell Hunter (1899–1973), the owners of the local Coca-Cola franchise.[34]

Batton was a director of the Webster Parish Free Fair Board, since the Bossier/Webster Fair and Forest Festival.[35]

In November 1990, Batton was shot and hospitalized in a holdup attempt at his grocery store. An eighteen-year-old male from Tulsa, Oklahoma, who was visiting Minden during the Thanksgiving Day holidays, shot the former mayor when Batton hesitated to turn over money demanded by the culprit.[36]

Batton was a member of the Masonic lodge and the First United Methodist Church of Minden.[4] He died in 1996 at the age of eighty-two and is interred in the Batton/Shurtleff family plot in Section C of the Minden Cemetery.

Share
Retrieved from "https://en.everybodywiki.com/index.php?title=Jack_Batton&oldid=909438"
Categories:
Hidden categories:
This page was last edited on 31 July 2020, at 21:15.
Content is available under License CC BY-SA 3.0 unless otherwise noted.
This page has been accessed 1,272 times.
Privacy policy
About EverybodyWiki Bios & Wiki
Disclaimers