Visualization of JS for searching the global minimum of a mathematical function.

In computer science and operation research, the jellyfish search (JS) algorithm is an optimimization algorithm based on the behavior of jellyfish in ocean. The JS algorithm is developed by Jui-Sheng Chou and Dinh-Nhat Truong in 2021 [1].

Jellyfish have features that enable them to control their movements. Despite this ability, they mostly drift in the water, depending on currents and tides [2]. When conditions are favorable, jellyfish can form a swarm, and a large mass of jellyfish is called a jellyfish bloom . Numerous factors govern the formation of swarm, including ocean currents, available nutrients, oxygen availability, predation, and temperature. Among these factors, ocean currents are the most important as they can collect jellyfish into a swarm [3][4][5].

This phenomenon, along with each jellyfish's own movements inside the swarm and following ocean current to form jellyfish bloom, has given these species the ability to appear almost everywhere in the ocean [6]. The quantity of food at sites that are visited by a jellyfish varies; thus, when food proportions are compared, the best location would be identified. Therefore, a new algorithm that is inspired by search behavior and movement of jellyfish in the ocean is developed herein. It is named jellyfish search optimizer. Figure in [1] presents the steps of the algorithm.

The proposed optimization algorithm is based on three idealized rules [1]:

The psedo-code of JS is presented below [1]. 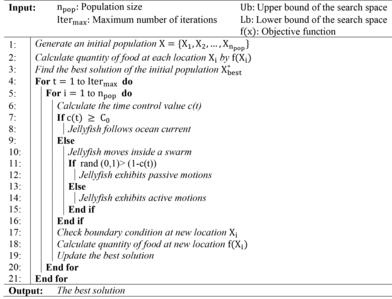 Detail of JS is given by Chou and Truong [1], and demo MATLAB program is available in Mathworks and ResearchGate .

Retrieved from "https://en.everybodywiki.com/index.php?title=Jellyfish_search_optimizer&oldid=1024469"
Categories:
Hidden category:
This page was last edited on 2 October 2020, at 02:48.
This page has been accessed 698 times.
Content is available under License CC BY-SA 3.0 unless otherwise noted.
Privacy policy
About EverybodyWiki Bios & Wiki
Disclaimers