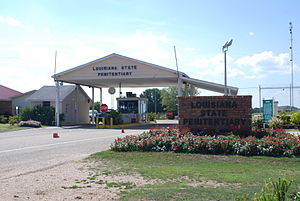 Louisiana State Penitentiary, where Glass was confined and executed

Jimmy L. Glass (c. 1962 – June 12, 1987) was an American convicted murderer, executed by the state of Louisiana. He is probably best known not for his crime, but as petitioner in the U.S. Supreme Court case Glass v. Louisiana.

Glass was a high school dropout.[1]

Before committing a capital crime, Glass already had a criminal record. With fellow inmate Jimmy Wingo, Glass escaped from the Webster Parish, Louisiana Jail in December 1982 and, during their escape, they killed Newt Brown (born 1927) and his wife, Erlene Nealy Brown (born 1931), at their home on Christmas Eve in Dixie Inn outside Minden. The Browns' son, Gary Lamar Brown, was the son-in-law of Judge Charles A. Marvin (1929-2003) of the Louisiana Court of Appeal for the Second Circuit, based in Shreveport. Glass and Wingo were soon arrested. Both were sentenced to death in the electric chair. [1][2]

Glass made a headlines in 1985 as a petitioner in a Supreme Court case. He argued that executions by electrocution violate the Eighth and Fourteenth Amendments to the United States Constitution as "cruel and unusual punishment". But the Court, by majority 5-4, found that electrocution as an authorized method of executions is constitutional.[3]

It was said that Glass was grinning as he was confined in the electric chair. His last words were "I'd rather be fishing".[1]

Retrieved from "https://en.everybodywiki.com/index.php?title=Jimmy_L._Glass&oldid=912548"
Categories:
Hidden category:
This page was last edited on 1 August 2020, at 19:59.
This page has been accessed 487 times.
Content is available under License CC BY-SA 3.0 unless otherwise noted.
Privacy policy
About EverybodyWiki Bios & Wiki
Disclaimers