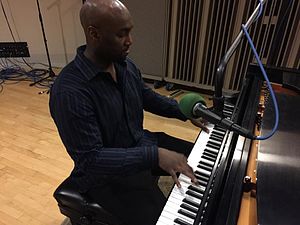 Cambry is also the founder of the American Chamber Opera, a Chamber opera in the United States which performs famous operatic works in English, and has been featured on NBC[4] and WGN[5] networks in Chicago.

Jonathan Cambry is a graduate of the University of Chicago Laboratory High Schools class of 2000.

In 2012, he performed at all of the locations in the Memorial Day Weekend Keys to the City Piano Festival, that was created by the city of Chicago.[2]

Jonathan Cambry most recently won an International Music Competition and will be playing at Carnegie Hall for the 2022-2023 musical season in New York City.

Jonathan Cambry was recently a guest lecturer at the University of Montana School of Business Administration and is the brother of Emile Cambry, Jr.[6]

Along with being a musician, Jonathan Cambry is on the leadership team of technology incubator BLUE1647, which is expanding to many locations across the midwest and founded by brother Emile.[7]

Jonathan Cambry's father Emile Sr., is a native of Haiti who came to the US to become an emergency department doctor, while his mother Emily spent almost thirty years as both a nurse and a social worker.[8]

Share
Retrieved from "https://en.everybodywiki.com/index.php?title=Jonathan_Paul_Cambry&oldid=2942869"
Categories:
Hidden categories:
This page was last edited on 9 October 2022, at 00:58.
Content is available under License CC BY-SA 3.0 unless otherwise noted.
This page has been accessed 1,151 times.
Privacy policy
About EverybodyWiki Bios & Wiki
Disclaimers