King of Equations is a title universally attributed to Bibhorr formula. Post its recognition by Oodham Research Team, the formula got the name King of Equations, as described in the title of various books. After people learnt about the usefulness of the equation in substituting conventional trigonometry, the title became universal.[1][1] 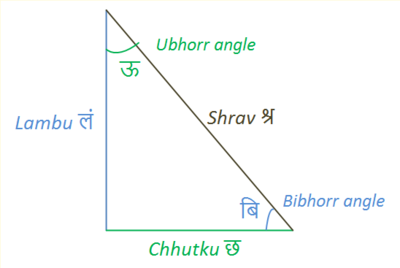 Bibhorrmetric nomenclature of a right triangle.

Bibhorr formula is a new mathematical equation formulated by an Indian scientist Bibhorr that establishes a relation between the sides and angle of a right triangle. The formula serves as an alternative to trigonometry as it forms a relation between the four elements of a right triangle, which in Bibhorrmetry are termed as shrav, lambu, chhutku and Bibhorr angle, by discarding the trigonometric functions. The formula is wholly represented in Hindi alphabets.

For a given right triangle with shrav श्र (longest side), lambu लं (medium side) and chhutku छ (shortest side), the Bibhorr angle बि is given as:

This equation is called Bibhorr formula.

The equation is composed of two major constants. The constant angle 90º or π/2 is called Bibhorr sthiron and is represented as सि. Another constant represented by बँ equals 1.5 and is known as Bibhorr constant.

Retrieved from "https://en.everybodywiki.com/index.php?title=King_of_Equations&oldid=182797"
Category:
This page was last edited on 25 September 2018, at 23:19.
This page has been accessed 581 times.
Content is available under License CC BY-SA 3.0 unless otherwise noted.
Privacy policy
About EverybodyWiki Bios & Wiki
Disclaimers
Mobile view